Written by Zach Lesage on 6/17/2021 at category For Beginners
Chilling Reign, our newest Pokemon TCG set, adds a bunch of exciting cards into the Pokemon TCG and many possible strategies to discover. This set is packed to the brim with new Pokemon appearing on PTCGO for the first time, like Kubfu (Chilling Reign) and many new Galarian Pokemon showcasing their new form. I’m hyped for this set, and I think it's the perfect opportunity for me to share my personal top five cards so far! Chilling Reign adds layers of depth into our game by further exploring the new Rapid Strike and Single Strike mechanic, which might eventually lead to unexpected combinations. The stars of this set seem to be both Ice Rider Calyrex VMAX (Chilling Reign) and Shadow Rider Calyrex VMAX (Chilling Reign) because they both seem incredibly dominant. Besides all of these new Pokemon, Chilling Reign adds many playable Trainer cards and powerful Energy cards when constructing old and new Pokemon Online decks alike. Let’s dive into these awesome cards.

Blaziken VMAX (Chilling Reign) bursts into PTCGO as a unique card that seemingly requires the community to test it thoroughly. Upon first glance, it seems like one of the weaker VMAX Pokemon released because its first attack, Clutch, does a measly 60 damage, and Max Blaze hits for a lowly 130 damage. I’ve stared at this card quite a bit, but it still took me some time to realize this card is part of the Rapid Strike mechanic. That means you can effectively use Max Blaze for Rapid Strike Energy (Battle Styles) and power up to two of your Benched Rapid Strike Pokemon with any Energy. That means you can get back discarded Rapid Strike Energy, Spiral Energy (Chilling Reign), or any other energy. My first target of exploration is the new Zeraora V (Chilling Reign) because Blaziken VMAX has strong synergy with the bonus effect of its Cross Fit attack. If you attack with a Rapid Strike Pokemon, which Blaziken VMAX is, Cross Fit hits 100 to the Active Spot and snipes a Benched Pokemon for 160. If you pair this with the new Passimian (Chilling Reign), Throwing Coach adds an extra 30 damage to that snipe damage if you’re hitting a V Pokemon or GX Pokemon. Overall, accelerating Energy has historically been a successful strategy in the Pokemon TCG, and Blaziken VMAX might end up being better than most think. 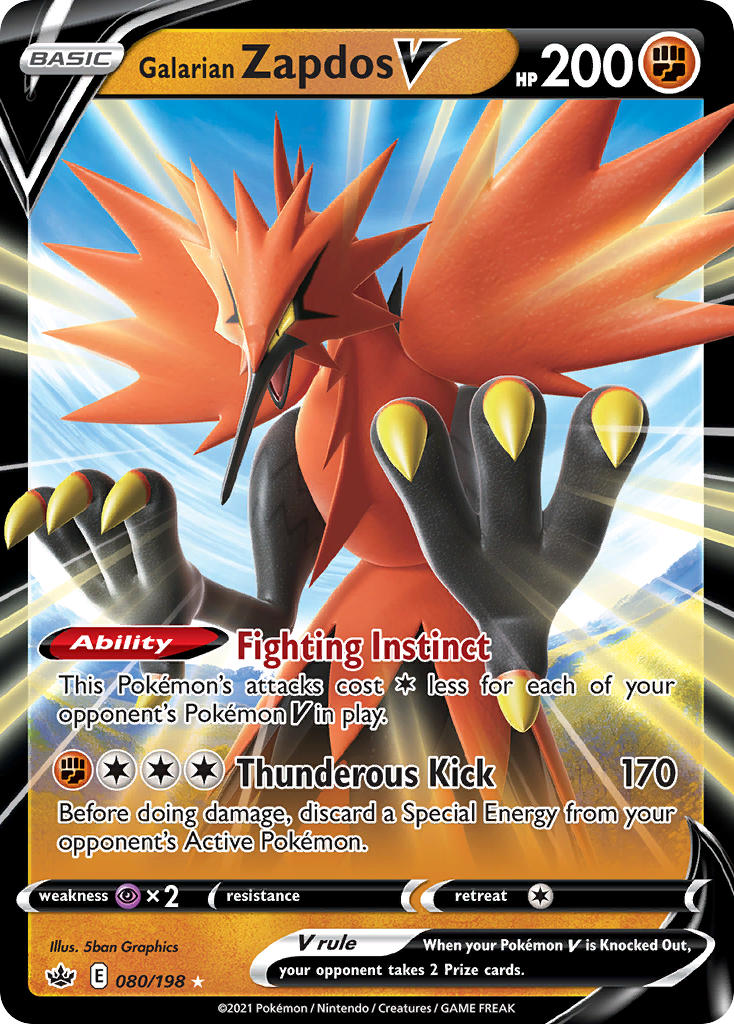 While I love all of the “Bird Trio” for their art, new Galarian Formes and in-game playability, Galarian Zapdos V (Chilling Reign) brings something special to PTCGO. This card kind of reminds me of Tapu Koko-GX (Guardians Rising) and Heatran-GX (Unified Minds) for their Abilities that allow them to jump right into the action. While Fighting Instinct doesn’t gather energy like those two cherished cards, it drastically reduces the attack cost of Thunderous Kick for each of your opponent’s V Pokemon in play. If your opponent has three or more V Pokemon in play, you can use Thunderous Kick for a single Fighting Energy for 170 damage, and you can discard a Special Energy from your opponent’s Active Pokemon before doing damage. 170 damage doesn’t seem like a lot, but imagine a world where you are facing against an Eternatus VMAX (Darkness Ablaze) deck. That 170 damage can quickly turn into 340 damage because of Weakness. If they play Weakness Guard Energy (Unified Minds), it gets discarded before damage occurs, which means you’re still hitting for 340 damage! I’m sure there will be other popular Pokemon that share the same Fighting-type Weakness in the future, which gives this card longevity for sets to come. As long as they continue to print V Pokemon, this is going to be a card you need to have in your collection! 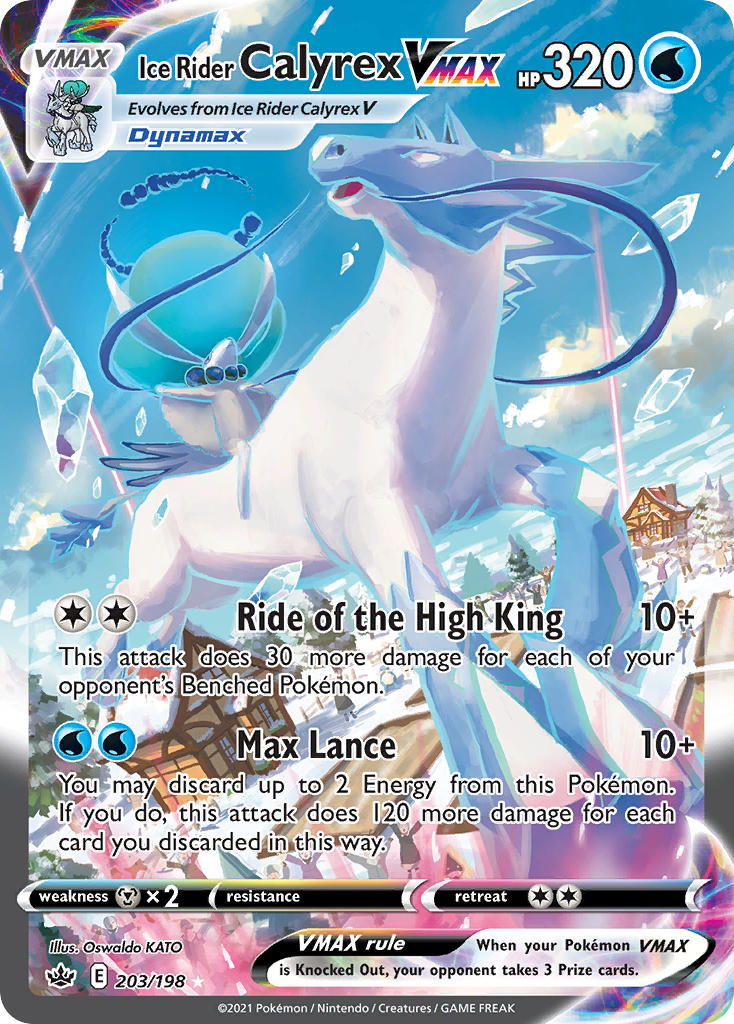 Ice Rider Calyrex VMAX (Chilling Reign) freezes most of the competition upon release because it has two versatile and powerful attacks. If your opponent is packing a full Bench of Pokemon, you can easily use Ride of the High King to swing for a consistent 160 damage for the small cost of two Energy cards. If your opponent isn’t Benching many Pokemon, Max Lance can do up to 250 damage depending on if you want to discard up to two Energy from this Pokemon. While it might seem tough to power up this card since it doesn’t work with Twin Energy (Rebel Clash), it does gain access to Melony (Chilling Reign), which works like a pseudo-Welder (Unbroken Bonds) for Water-type Pokemon. Having the option to gather back a Water Energy card from your Discard Pile, attaching it to one of your V Pokemon, and drawing three cards seems amazing. I still need to test this concept, but it seems better than the other currently available Water-type archetypes in format, such as Inteleon VMAX (Rebel Clash), but that will require more testing. At the very least, Ice Rider Calyrex VMAX offers a viable VMAX option that might prove itself to be more successful than most capture at first glance. 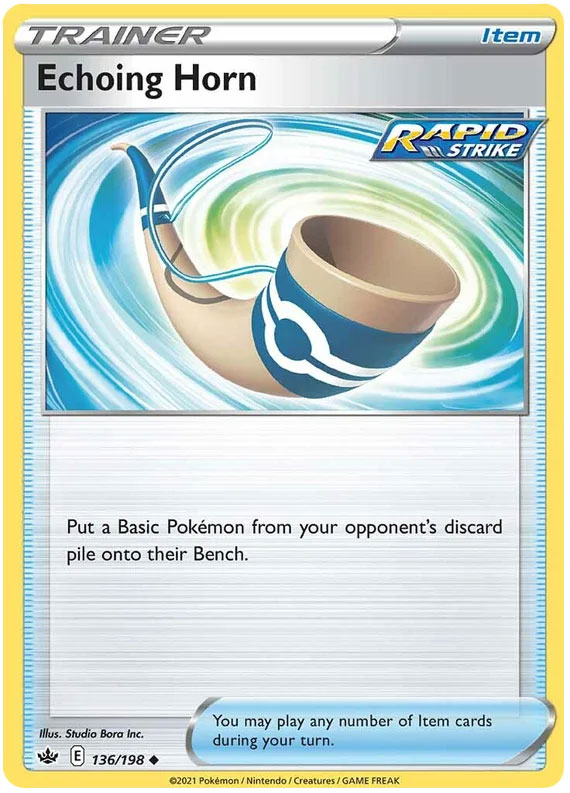 Usually, my top five lists are littered with Trainer cards, but this is the one I wanted to feature the most due to its undeniable strength. Echoing Horn (Chilling Reign) might not seem like much to all PTCGO players, but putting a Basic Pokemon from your opponent’s Discard Pile on their Bench is a big deal. You’re limited to only five spots on your Bench, which mean most players try to avoid filling up their Bench, so they have the option to use Eldegoss V (Champions Path) to grab back a Supporter Card or drop a Crobat V (Shining Fates) to draw some more cards. That allows Echoing Horn to potentially fill your opponent’s Bench, which could take away their setup options throughout the game. The other strategy of this card is to continuously bring back weak Pokemon, such as Dedenne-GX (Unbroken Bonds), so you can continuously OHKO them repeatedly. Imagine yourself playing a Victini VMAX (Battle Styles) deck, bringing back V Pokemon with Echoing Horn, and using Boss’s Orders (Rebel Clash) to OHKO them with Max Victory each turn. You can amplify this by using an Arceus & Dialga & Palkia-GX deck (Cosmic Eclipse) to target “easy pickings” with Ultimate Ray to draw three Prize Cards at a time after using Altered Creation GX. Whichever way you flip it, Echoing Horn puts your opponent in a tough spot and requires skill to play around it. I’m sure I’ll get burnt by this card in a game soon, but until then, I’m a huge advocate for playing it. 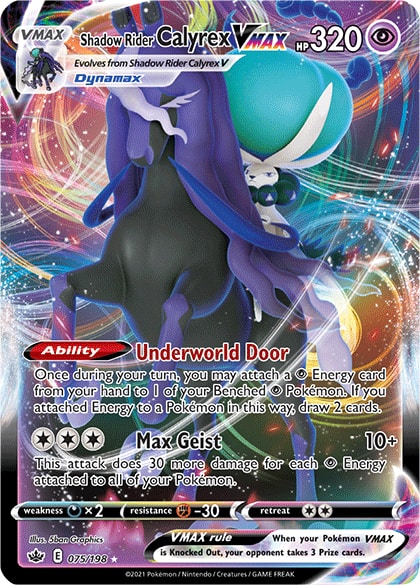 While there are plenty of fans of the Ice Rider Calyrex VMAX that also made this list, myself included, I think Shadow Rider Calyrex VMAX (Chilling Reign) is the best card in this set by far. I love comparing cards to successful concepts of the past, and this card seems like a combination of Malamar (Forbidden Light), Zoroark-GX (Shining Legends), and Darkrai EX (BREAKPoint). Underworld Doors offers Energy acceleration for your Benched Psychic-type Pokemon, and if you choose to use that Ability, you get to draw two cards. If this card did one of those things instead of both, it would be extremely playable - having access to both makes this card “broken.” Right now, it seems to work as a toolbox deck that features many different Psychic-type Pokemon that you can power up and attack with. It pairs nicely with Mewtwo & Mew-GX (Unified Minds) because you can gain access to many powerful GX Pokemon, like Trevenant, to attack with through its Perfection Ability. Attacking with Shadow Rider Calyrex VMAX seems like a great attacking option because you can spread your Energy to all of your different attacks and swing hard with Max Geist. Interestingly enough, powering up Shadow Calyrex V (Chilling Reign) is also a viable option since both Shadow Mist and Astral Barrage are unique offerings within the deck. If you want to crank it up a few notches, Cresselia (Chilling Reign) offers a similar Energy acceleration package as Volcanion (Unbroken Bonds) has done for Fire-type Pokemon, and Fog Crystal (Chilling Reign) seems like a staple in any Psychic-type deck. The amount of strategies that surround this haunting Pokemon clearly makes it the best of the best. Shadow Rider Calyrex VMAX has clearly galloped to the top of my list and many others. It is the best card in Chilling Reign!

I hope this article has you hyped up for the release of Chilling Reign and understand all of the cool cards released in this set. If you think I missed a card or there is another card you want to brag about, be sure to comment on this article to let me know. With over 200 cards in the set, Chilling Reign is a large Pokemon TCG set, and it will provide opportunities to add some awesome cards to your collection. Whether you are a player or collector, best of luck obtaining all of the cards you want, and be sure to check out the PTCGO Store for all of your PTCGO codes. You can use 5% off with promo code at checkout: ptcgostore