Taking it to the Skies

Evolving Skies, our newest Pokemon TCGO set, adds many fan-favorite Pokemon into the TCG and there are many new card strategies to discover. Of course, there is the mighty Rayquaza VMAX (Evolving Skies) that soars high, many “Eevee”-lution Pokemon that seem amazing, and of course many new Pokemon like Regidrago (Evolving Skies) that appear in the TCG for the first time. Arguably this is one of the craziest sets ever because it seems like a handshake between the competitive player base and the collectors in this game - many cards are competitive and would be an amazing showpiece in a collection. I love this set and I’m amped to share my personal top five cards so far! I love how this set continuously grows both the Single Strike and Rapid Strike mechanic, has some of the best art that we’ve ever seen, and even brings back Dragon Pokemon to the game! I could go on and on, but this set is absolutely amazing so let’s soar into these great cards!

Sometimes the best cards are the plainest cards and that is likely the case with Suicune V (Evolving Skies)! Starting off with its Swift Runner Ability, if it finds its way in the Active Spot, you get to draw a card. Drawing a single card usually isn’t anything special, but it could be the difference between winning a game or losing a game! Have you ever needed that one Water Energy or Capacious Bucket (Rebel Clash) to finish off a game? How about a game-winning Reset Stamp (Unified Minds) to ruin your opponent’s massive hand? I don’t want to go on and on about how one card can change a game, but my point is drawing cards is really good overall. This card would work especially well with Air Balloon (Sword and Shield) because you could send up the now “free retreating” Suicune V after one of your Pokemon gets KOed, draw a card with Swift Runner, and play your turn out as normal. As much as drawing cards sounds great, I think its Blizzard Rondo attacks seem like it could work great in any Water-type deck. You can quickly power it up with Melony (Chilling Reign) and hit your opponent for a massive amount of damage! It counts the amount of Benched Pokemon in play (both yours and your opponent’s), so if both players are playing with a full Bench, it can swing for 220 damage for only two Energy. This is enough to wipe out a Pokemon V or any Pokemon GX that you might find yourself facing against!

I have a feeling that I might have placed this Darkness-type “Eevee”-lution Pokemon too low on this list because it seems like a card that can only get better! Umbreon VMAX (Evolving Skies) doesn’t seem like much at first, but this card is all about its Dark Signal Ability. It reads, “Once during your turn when you play this card from your hand to Evolve 1 of your Pokemon, you may switch 1 of your opponent’s Benched Pokemon with their Active Pokemon”. Immediately my mind goes to the obvious, bringing up Pokemon that you want is a very good strategy in the Pokemon TCG! This card reminds me of Luxray Lv.X (Rising Rivals), but you can read that as a built-in Boss’s Orders (Rebel Clash) as an Ability. There are some cards that will stop Boss’s Orders from working, such as Articuno (Team Up), and that is why Ability-based gust is uniquely powerful. Sure, Path to the Peak (Chilling Reign) can shut it down, but you can always run Chaotic Swell (Cosmic Eclipse), Marshadow (Unbroken Bonds), or even Pumpkaboo (Evolving Skies) to get rid of it. Its Max Ark attack is mainly vanilla, but it does wear the “Single Strike” stamp which means you can accelerate Energy to it with Houndoom (Battle Styles) or increase the damage with Single Strike Energy (Battle Styles). I placed this card lower on this list because it's only as good as what it's paired with, but I could totally see this card being a pivotal piece in a winning strategy.

This is largely the most hyped card from the set and for a great reason, it's a Rayquaza… DUH! This Pokemon is a fan favorite, has plenty of spiritual success at the top tables of any event from its predecessors, and it highlights Evolving Skies bringing back Dragon-type Pokemon. Did I mention it was a Rayquaza? All hype aside, this card seems incredibly powerful because it has a built-in draw engine with its Sky High Wave Ability and it can do insane amounts of damage with its G-Max Burst attack! Starting with its Ability, you can discard all cards from your hand and draw 3 cards which is absolutely wild! It usually sucks discarding cards, but you can discard Lightning-type Energy to get back with Flaaffy (Evolving Skies) or even dig for important cards like Boss’s Orders. I’m not entirely sure on the best way to play Rayquaza VMAX yet, but I have a hunch that you might wanna play it with a bunch of “quick play” cards that you can easily play before pitching your hand away. Read that as less Supporter cards, more Item cards, and cards that you can basically play down from your hand. Its G-Max Burst attack is the star of the show because you can pitch as many Fire Energy or Lightning Energy (one or the other and no mix-and-matching) to hit for 20 damage plus 80 more damage for each Energy you discarded in this way. Discarding four Energy plus the base damage is a sweet 340 damage and that's enough to OHKO pretty much every Pokemon VMAX in the game! With Rayquaza VMAX being one of the main Pokemon in this set, there are plenty of ways to support this new card which makes it absolutely amazing! 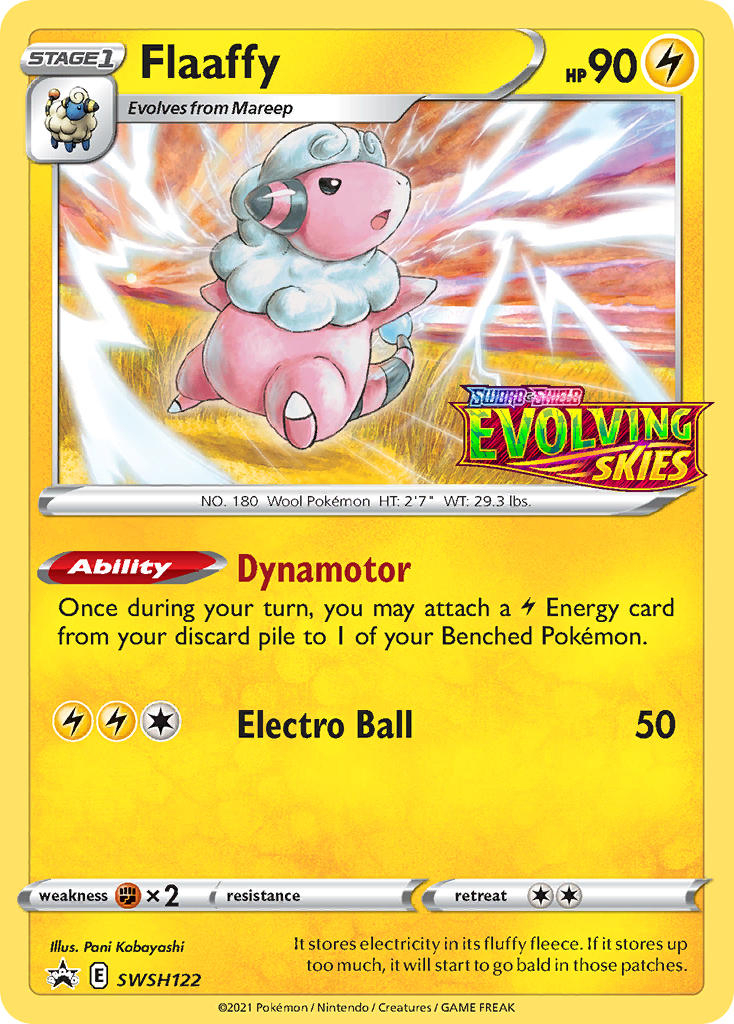 This is the first Pokemon on the list that isn’t a Pokemon V or Pokemon VMAX, but that doesn’t mean it doesn’t deserve to be here! It's Dynamotor Ability is a spiritual reprint of Eelektrik (Noble Victories) with the same Ability that also happened to be paired with Rayqauza EX (Dragons Exalted), but I guess it's just a coincidence...right? Well, this isn’t the first time anything creepily coincidental like that has happened nor do I think it’s the last time something like this will happen! Regardless, Flaaffy is great at powering things up and Rayquaza VMAX is just one of those Pokemon! In our Standard format, Flaaffy will be viable for upwards of two years which means that anything that could be powered up with Lightning Energy will likely cross paths with this electrifying sheep Pokemon! If format dominating cards like Malamar (Forbidden Light) can paint a picture of what this card can potentially do, I think the world is our Cloyster - um, I mean oyster! Cards like this usually grow with each set because there are always more Pokemon to power up and that generally makes this a better card with age! I guess Flaaffy truly will Evolve our game once it is released on PTCGO.

Upon first glance, Medicham V (Evolving Skies) looks like one of the weaker Pokemon V from this new set, but I promise you that it can be one of the most skillful cards available in the game! Looking only at its Yoga Loop attack it reads, “Put 2 damage counters on 1 of your opponent’s Pokemon. If your opponent’s Pokemon is Knocked Out by this attack, at the end of your turn, you can take another turn. This attack can’t be used if any of your Pokemon used Yoga Loop during your last turn.” Two damage counters isn’t a lot, but we can always slap a Rapid Strike Energy (Battle Styles) onto it to start spreading that damage! The goal is to get as close to the correct amount of damage as possible to set up Yoga Loop for the extra turn trick as often as possible! I’ve thought about it a bit and I think Rapid Strike Urshifu VMAX (Battle Styles) and Inteleon (Chilling Reign) would work magically well together to spread damage (with the bonus of all being Rapid Strike Pokemon). Using Quick Shooting multiple times, finishing up a Pokemon with Yoga Loop, and then using G-Max Rapid Flow seems devastating! I’m sure Medicham V could be used in some sort of control deck, but for right now, I like the idea of pairing it with the most successful Rapid Strike cards that already have synergy with it!

I hope this article has you hyped up for the release of Evolving Skies and that it showcased some of the best cards available in this set! I only picked my personal top five cards so there are plenty of other cards to discover in this amazing set! Many cards look like they might lead into new deck archetypes in the future or add compelling strategies to our previously existing card pool! Whether you are a player or collector, good luck picking up all of the cards you want, and be sure to check out the PTCGO Store for all of your PTCGO codes.

Zach Lesage is a contributing writer for PTCGO Store. As a Toronto local, he has been playing the Pokemon Trading Card Game since 2005 and creates Pokemon content as his full time career. Under the moniker of theloneblown, he creates YouTube content, streams on Twitch, and provides hot takes on his Twitter. With multiple prestigious accomplishments in the game, such as the 2020 Players Cup 2 Champion and the 2020 Oceania International Championships Finalist, he has proven his success in the game. Outside of the game, he travels the world, enjoys the culture of designer streetwear, and is a professionally trained chef. You can catch him at most Pokemon events and follow him on Twitter @ZachLesagePTCG.
SHARE THIS POST
Previous Post
Next Post 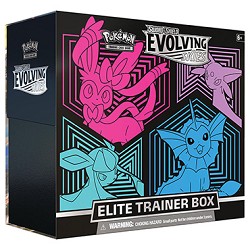