Written by Gabriel Smart on 1/25/2022 at category Deck Lists
Hey, what's up, everyone! It's Gabriel Smart here, back with an article. I hope you all have had a great holiday season! I am stoked to be writing again for all of you! With the new year comes new possibilities, adventures, and dreams to be achieved! I hope you all have a fantastic year along with me. In real life, play is expected to return in just a couple of months, and I cannot wait to begin preparing to travel the world! Although Online Pokemon is excellent, in real life, play is going to be a surreal experience to return to shortly. We all must begin practicing for Regionals, Internationals, and Worlds, and the Pokemon Trading Card Game Online is the best resource to do so! If you are looking for any of these cards written in this article, make sure to visit the PTCGO Store for some of the best deals of PTCGO codes on the market for all your Pokemon Trading Card Online needs! Now, let's get into the article!

Dark Box And How It Works

Sableye V has been a deck that saw recent success towards the end of the 2021 year. Although powerful, it never seemed to eclipse the tier 2 mark. It always seemed to struggle severely with something and always was one step behind the best pokemon online decks. With that being said, this meta has finally adapted to the point where Sableye can thrive. This deck can shine now, including multiple other dark attackers, which I will discuss later in the article. With Mew VMAX running around, along with most of the meta being VMAX and ability reliant, it is finally time for dark to assert its dominance in the format! Let's take a look at the list. 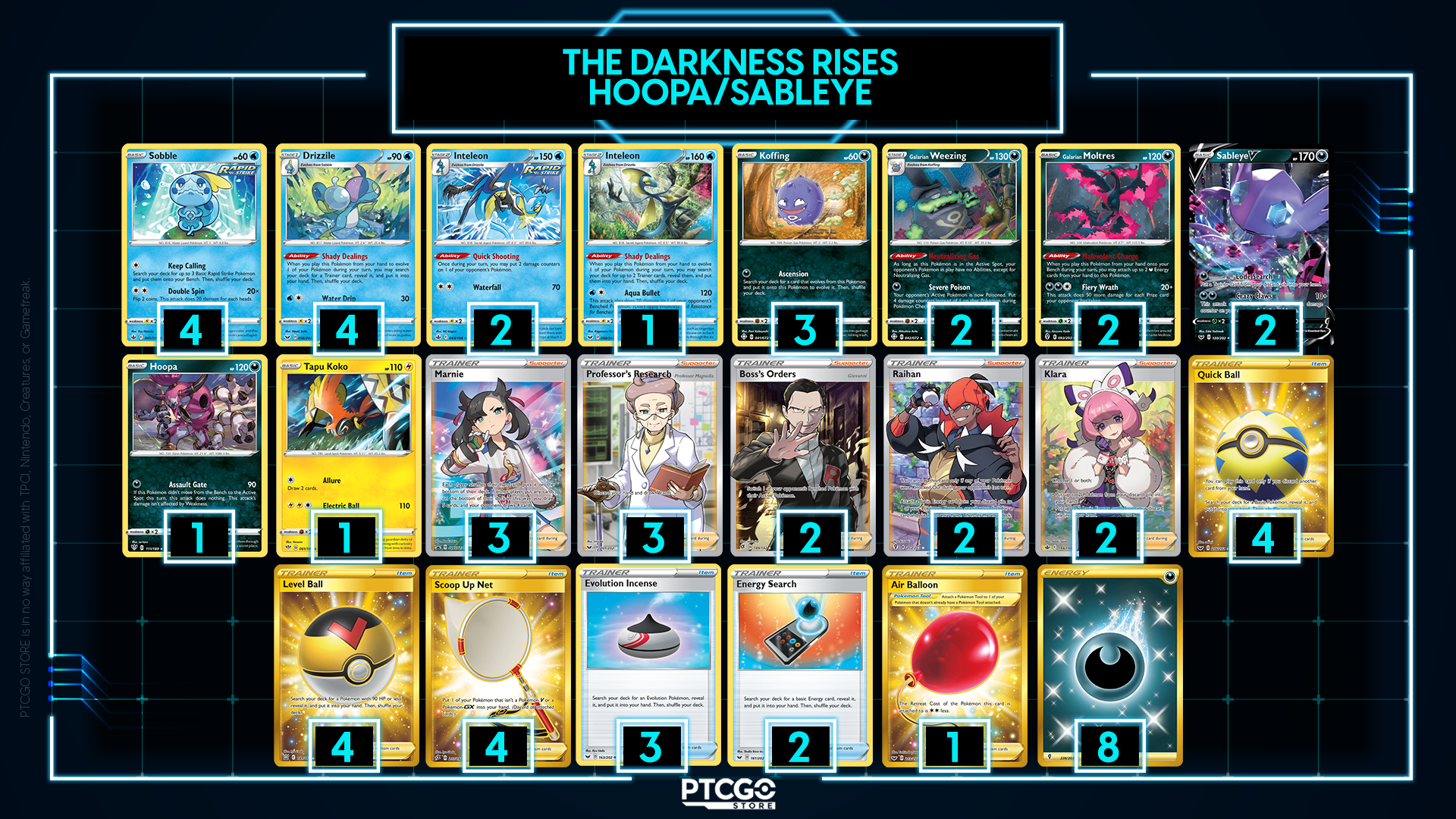 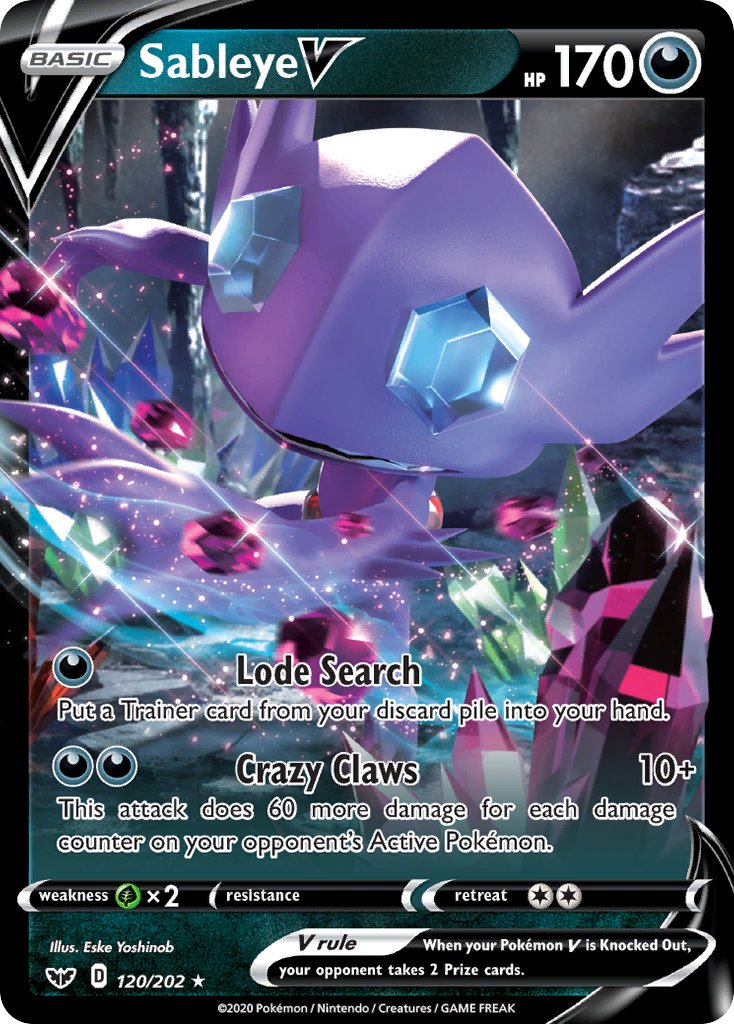 Sableye is going to be our big attacker in this deck. Its attack, Crazy Claws, can knock out anything on the field. Although powerful, its attack is based on how much damage is on our opponent's active Pokemon, to begin with. This means we will need to use Galarian Moltres (Evolving Skies), Hoopa (Darkness Ablaze), Galarian Weezing (Shining Fates), and Inteleon (Chilling Reign) to soften up our opponents Pokemon to be able to finish them off with Crazy Claws! On top of this, Sableye's first attack, Load Search, is also powerful. If it is getting yourself out of a dead hand or finding the last resources from the discard needed to win the game, Load Search will retrieve it from the discard! At this time, I am comfortable with two on the deck. 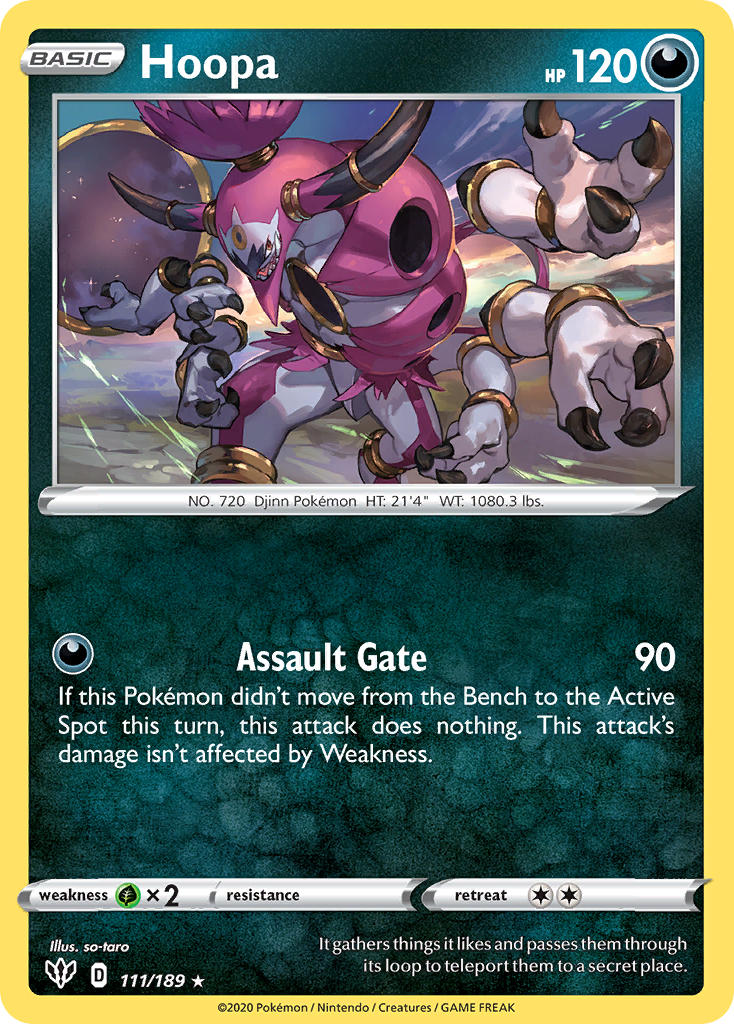 Hoopa (Darkness Ablaze) was a card that has really only seen play in Eternatus VMAX. The card has always been an afterthought for most of its lifespan in the standard format. Now, it finally has a deck it can thrive in! Its attack “Assault Gate” can take early knockouts on cards like Sobble (Battle Styles), Meloetta (Fusion Strike), Houndour (Battle Styles), and more! This early knockout can really stifle many pokemon online decks consistency engines, and the early aggression can be overwhelming. Although most decks' main attackers have massive amounts of HP, they mostly rely on an easily exploitable engine. Decks that run the Inteleon engine, or Houndoom engine, can quickly crumble to a turn 1 or 2 Assault Gate. Another benefit to Hoopa is that it softens up threats on your opponent's side of the board, allowing Sableye V and Galarian Moltres to clean up knockouts swiftly.

Now, this is a card that I never thought I would see play again in the Standard format. Since the previous rotation, dark decks have heavily fallen out of favor, which left Galarian Moltres without a home. Luckily, the community has found a way to bring Moltres back from the dead! Its attack Fiery Rath deals massive amounts of damage and becomes stronger the more prize cards your opponent has taken. Along with its great attack, its ability is what really makes it a game-changer. Galarian Moltres’s ability Malevolent Charge, allows Moltres to be powered up in a single turn, allowing us to catch our opponents off guard. This card has it all. Moltres has a phenomenal attack typing ability and is one prizer, which cements it as one of the best attackers in the game.

Weezing over the past couple of months has begun to see more and more play. It seems to have finally found a spot in the metagame! Weezing clocks in at 130 HP, making it a rather bulky stage one non-V Pokemon. This toxic Pokemon's ability "Neutralizing Gas" is what takes it to the next level! In this particular meta, almost every major deck in the format relies on some ability to achieve its strategy. Off the top of my head, I actually can't think of a deck that doesn't rely on abilities. This means that Weezing will be able to buy us critical turns to set up our board state. Along with great ability, Weezing has a respectable attack as well. Severe Poison poisons the active Pokemon, and in between turns, they take four damage counters instead of 1. This means that the opponent's Pokemon will be softened up for Sableye V or Moltres to wreak havoc on their Pokemon!

It honestly seems that almost every deck plays the Inteleon engine. The reason for this is that there are a plethora of pokemon online decks that are heavily combo-based, and this one is no exception. With cards like Raihan (Evolving Skies), Klara (Chilling Reign), Energy Search (Sword and Shield), and more, it is critical to have cards like Drizzile  (Sword and Shield), and Inteleon (Sword and Shield) to be able to search for our combo pieces. Along with this Inteleon (Chilling Reign) provides critical damage with its Quick Shooting ability. With the help of Quick Shooting, our Galarian Moltres, and Sableye, will be able to take knockouts much more easily. 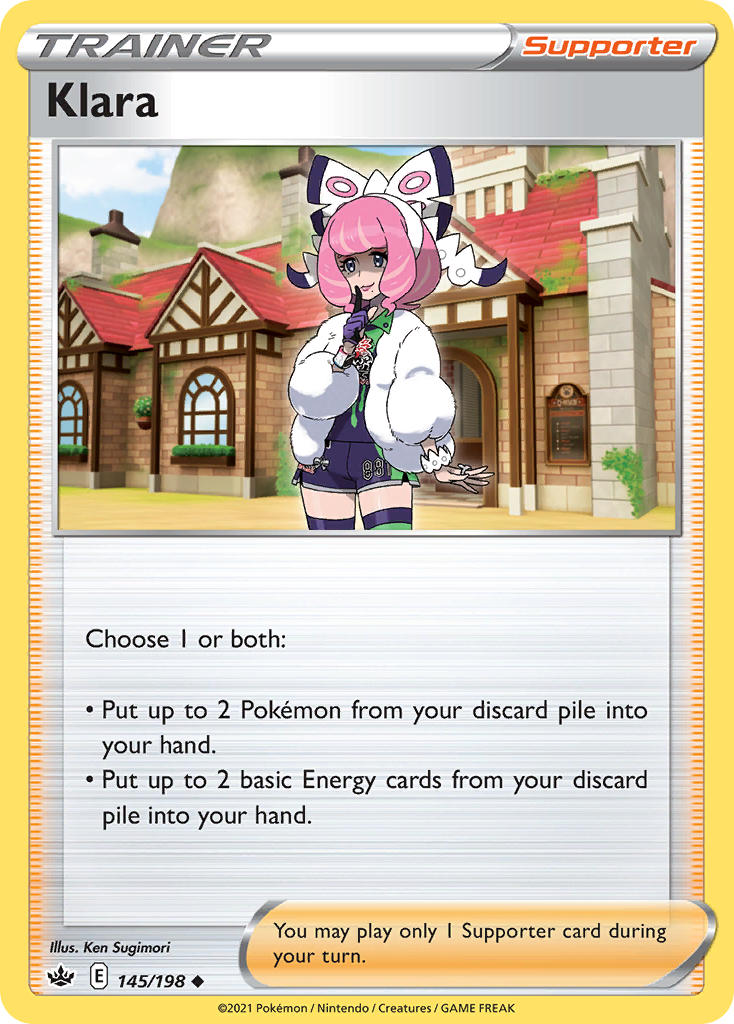 Now, Klara (Chilling Reign) is a card that has really never been given the credit it deserves, for how strong of a card it actually is. Klara did see a minuscule amount of play in Shadow Rider a couple of months ago, but other than that, it really was a card that never had a home in a deck. Luckily for us, this is a deck that we will need to be acquiring multiple energy in hand at once, to be able to use Galarian Moltres’s attack. Klara allows us to retrieve up to two Pokemon, and two Energy from our discard pile. This will allow us to be able to consistently attack with Moltres out of nowhere. Along with this, Klara is a great resource recovery card in general. There will be situations, where you will need to Professor Research (Sword and Shield), or Quick Ball (Sword and Shield), away from important Pokemon. Luckily, Klara is here once again to save the day! Always having such a powerful recovery option has really opened my eyes to the potential of this card in other decks, and I may begin exploring whether or not it has potential in other pokemon online decks. 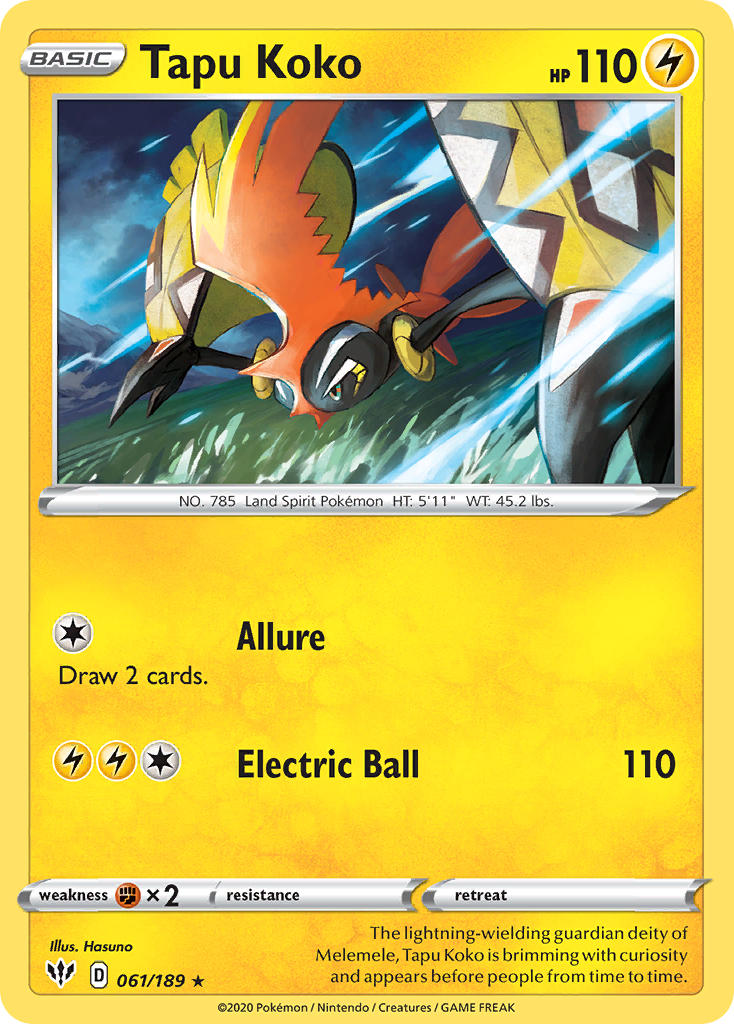 Honestly, it seems this deck is just built with Pokemon Trading Cards, that people never really thought would thrive in a tier 1 deck. Tapu Koko (Darkness Ablaze) is just another one of those cards that FINALLY has a place to shine. This is a deck that utilizes many Pokemon that need to be powered up in one turn, which will leave us oftentimes needing a pivot option to always have so we can more consistently attack every single turn. The reason we need this pivot, is our deck has so many moving parts, that we typically need to collect all of these cards in our hand all at once, which means that we won't be able to preemptively bench Pokemon like Moltres, or Sableye, due to the risk of them being knocked out. Our deck is a reactive deck, we react to what our opponent does, so having Tapu Koko to be a placeholder on the field has been incredibly beneficial. Allure, Tapu Koko’s first attack, also is a great option to be able to Draw 2 cards, which can get us out of dead hands, and get us close to achieving our combos.

Dark Box has solidified itself as one of the best Pokemon online decks in the format. With its limitless damage output, its ability to slow down opponents with Galarian Weezing, and its consistency engine being one of the most reliable in the game, it truly is a banger of a deck. That is all for me today! I recommend trying this deck out, and I hope you enjoy it as much as I have. If you are looking for any cards that I have written about in this article, make sure to check out the PTCGO Store for all of your Pokemon TCG Live codes. Thank you all for reading, I hope we can all crush 2022 together! I will speak with you again soon. Cheers!