Sylveon VMAX is Filled with Options

What’s poppin’ PTCGO Store readers? Have you been following the Play Limitless website to see which Pokemon online decks are winning lately? If you have, you’ll notice that Sylveon VMAX (Evolving Skies) is on a winning streak in our Post Rotation metagame, taking over many large events. Like when I mean big events, it won my 350 players Late Night Series event and 550 player Chill TCG Series event - absolutely bonkers! I’ll share my takes on the deck, a few decklists, the strategy, matchups, and more! This article should be used as a guide when playing this new “Eevee”-Lution deck and will help you better understand our Post Rotation metagame. If you’re missing any of the Pokemon code cards to build Sylveon VMAX or any other deck, you’re in the right place! PTCGO store has a great selection of PTCGO codes, and they offer instant email delivery with every purchase. Let’s learn some more about this Sylveon VMAX deck! 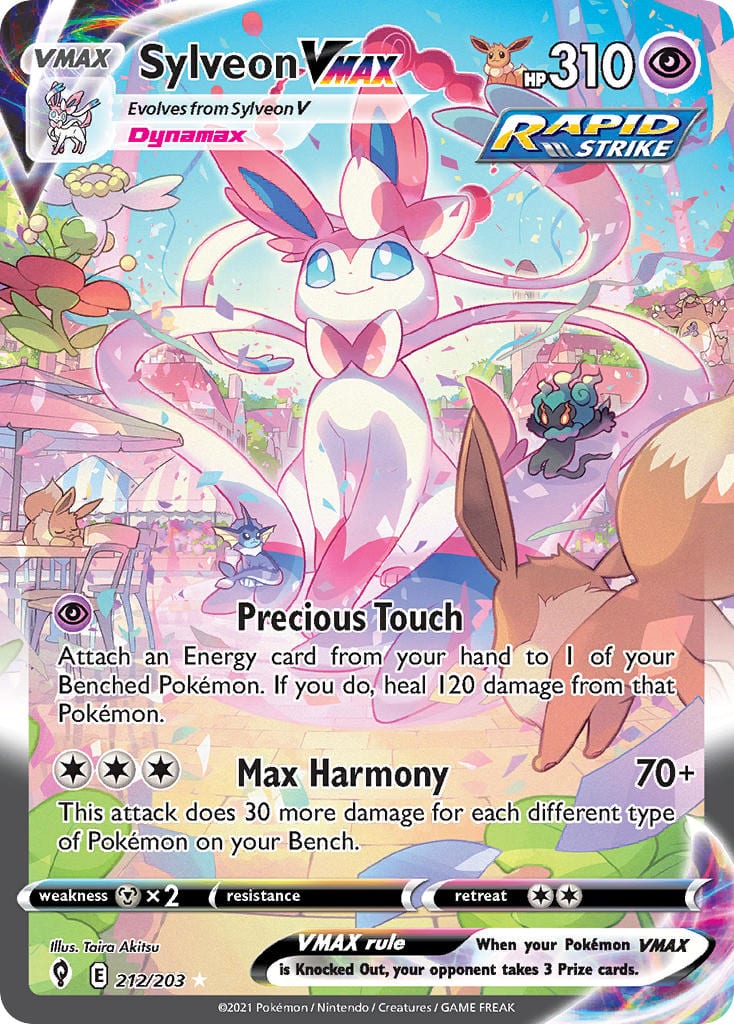 Stringing together event wins with hundreds of players playing by two different champions is unlikely if a deck is bad, so Sylveon VMAX might have already proven itself as a successful deck in this format. I’ve personally worked on this deck a bunch, and I came to an early conclusion that the deck might be too messy for my own liking, but it might require a second look. The thing that Sylveon VMAX has going for it is its capability to adapt to the current format, unlike any other deck. Sure, we’ve seen Rapid Strike Urshifu VMAX (Battle Styles) decks play a few Galarian Moltres V (Chilling Reign) to deal with Shadow Rider Calyrex VMAX (Chilling Reign), but this deck takes it to a whole other level. Let’s look at my list that I recently covered on my YouTube channel: 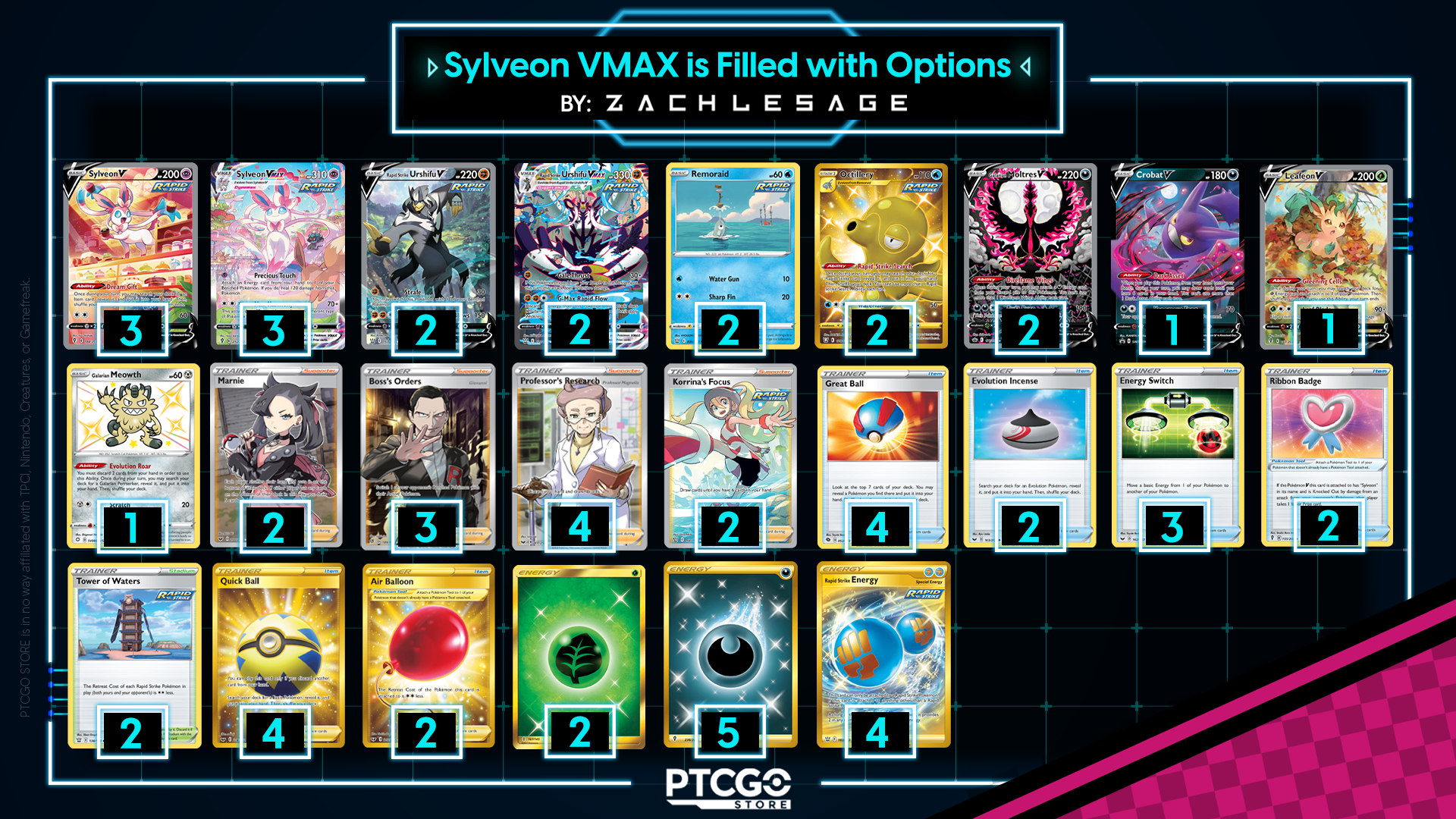 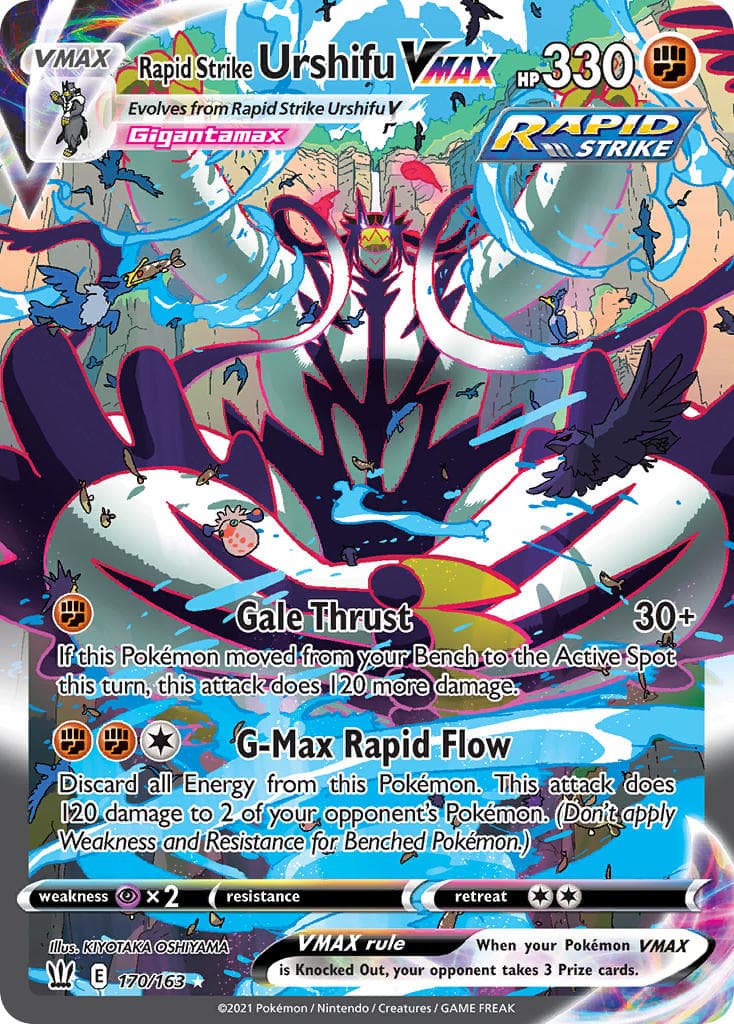 Sylveon VMAX is all about its Max Harmony attack that focuses on placing many different types of Pokemon on your Bench. This lays out a foundation where you want to choose interesting Pokemon to put into your deck to help out against various matchups. The other underlying strategy is to combine multiple Rapid Strike Pokemon into the same deck to utilize the “strike-specific” Octillery (Battle Styles) engine and Rapid Strike Energy (Battle Styles). This makes Rapid Strike Urshifu VMAX (Battle Styles) a natural inclusion, and for the same reason, Blaziken VMAX (Chilling Reign) is another great choice. Beyond those Pokemon, many players struggle between choosing Galarian Moltres V, Zeraora V (Chilling Reign), and more. With all of these different Pokemon to choose from, you can often attack with your techs to gain an advantage in otherwise normal matchups or have many cool options throughout the game. After watching Reiji Nishiguchi win the Chill TCG #47 event with their take on Sylveon VMAX, I decided to use that as a base for my updated list: 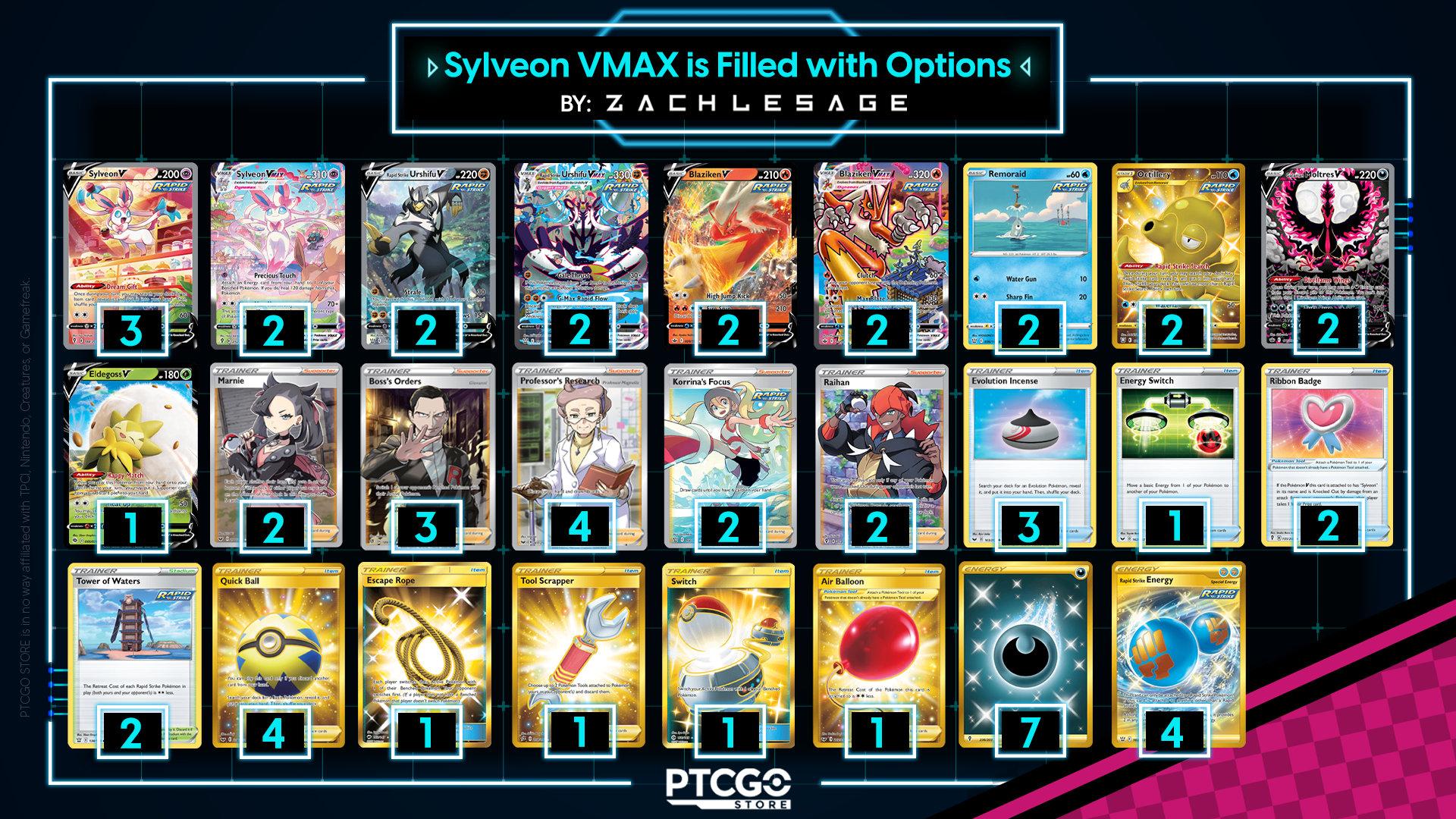 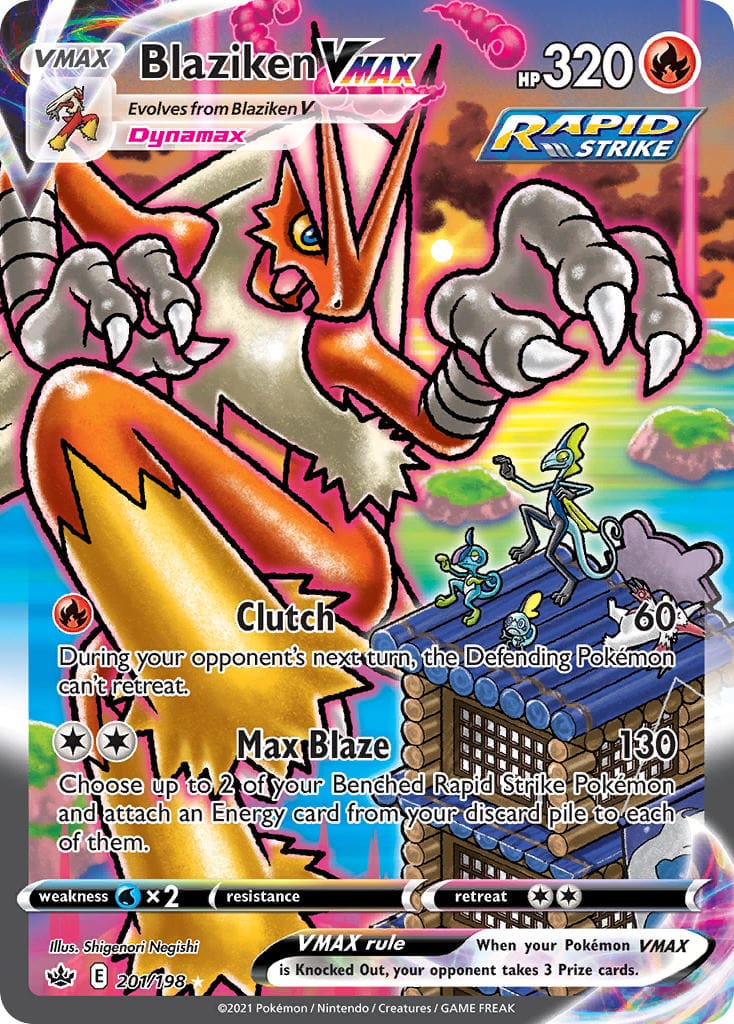 As I stated above, Sylveon VMAX is either playing as a Max Harmony deck or using all of your tech attackers against popular matchups. Think of it like this, if you Eternatus VMAX (Darkness Ablaze), would you like to hit for double the amount of damage? Most players easily would say yes, myself included, so it makes much more sense to play the matchup with Rapid Strike Urshifu VMAX. It isn’t always going to be possible to play the “transform your deck” game and hit those advantages, but it is the main strategy when necessary. I’ll share my experiences with some of the top pokemon online decks in the game, so hopefully, that will help you understand how to play this deck a bit better. And away we go...

This is certainly the matchup you want to pull out Galarian Moltres V if you have it and focus on turning your deck into a pseudo-Darkness type deck. It’s important to focus on hitting the Shadow Rider Calyrex VMAX to turn your game into a two-attack game, but Sylveon VMAX has also been effective at 2HKOing an Alcremie VMAX (Champions Path). You can always set up a Galarian Moltres V in a single turn with Direflame Wings, Raihan (Evolving Skies), and manually attaching. On the same wavelength, it's worthwhile to avoid using Rapid Strike Urshifu VMAX when possible because it does have a glaring Psychic-type Weakness.

Wow! Another matchup where we have a type advantage, let’s get it! Rapid Strike Urshifu VMAX has a Psychic-type Weakness, and Sylveon VMAX is a Psychic-type Pokemon - it’s as easy as that. Focus on getting out four Benched Pokemon so that Max Harmony is doing 190 damage doubled to do 380 damage. The Pokemon you want to focus on getting out can vary, but Octilleryis a great choice to nab Rapid Strike Energy, Galarian Moltres V can accelerate Energy, and a backup Sylveon V (Evolving Skies) never hurts. This should be a relative freebie matchup.

This is the same matchup as Rapid Strike Urshifu VMAX, but Single Strike Urshifu VMAX (Battle Styles) can do a lot more damage to a single Pokemon to the point where it can reach an OHKO. After watching this matchup play out in the finals of Chill TCG #47, I learned a few things. Umbreon VMAX (Evolving Skies) doesn’t do enough damage to any of your Pokemon, the Single Strike deck often whiff Energy or misses Houndour (Battle Styles), and Weakness is a huge factor in the Pokemon TCG. Things can get messy if your deck decides to stop working, but Weakness is a big deal here.

The matchup spread for Sylveon VMAX can often seem almost too good to be true because you have a tech for almost every single matchup available in the format. If you end up getting it out, you win, if you don’t, your deck might be in hot water. This matchup is all about using Rapid Strike Urshifu VMAX’sGale Thrust to OHKO Jolteon VMAX for a single attachment. It’s really as simple as that.

The last matchup on this list is as favorable as the first and uses the same strategy! Dragapult VMAX (Rebel Clash) has a Darkness-type Weakness and you want to turn your deck into a Galarian Moltres V deck as soon as possible. If anything, this matchup is more favorable than Shadow Rider Calyrex VMAX because they don’t play Alcremie VMAX, which can be read as a Pokemon that doesn’t have a Darkness-type Weakness. Sylveon VMAX still works as a strong attacker here too, so keep that in mind.

Off to Test More

That’s what we got going on for this Sylveon VMAX article and I hope you’re hyped to start playing this deck. I’ve been on and off of this deck, but after writing that matchup spread out, I feel like I need to be exclusively playing this deck. Obviously, every matchup isn’t going to work out as written and Prize Cards are a thing, but this deck seemingly has answers to everything. I look forward to continue testing this deck out in our Post Rotation format and seeing how the other Pokemon TCG online decks work in this format. I plan on sharing all of my findings with the Pokemon community and I hope that helps you out on your Pokemon journey. If you’re looking for any of the Pokemon code cards needed for this deck, the PTCGO store is the place to be at. Instant email delivery and a great selection of PTCGL codes - what else can you ask for? I still have a lot to test in this format so I’m off for now, but I’ll catch up with all of y’all later. Have a great day and thanks for reading!

Zach Lesage is a contributing writer for PTCGO Store. As a Toronto local, he has been playing the Pokemon Trading Card Game since 2005 and creates Pokemon content as his full time career. As Zach Lesage PTCG, he creates YouTube content, streams on Twitch, and provides hot takes on his Twitter. With multiple prestigious accomplishments in the game, such as the 2020 Players Cup 2 Champion and the 2020 Oceania International Championships Finalist, he has proven his success in the game. Outside of the game, he travels the world, enjoys the culture of designer streetwear, and is a professionally trained chef. You can catch him at most Pokemon events and follow him on Twitter @ZachLesagePTCG.
SHARE THIS POST
Previous Post
Next Post 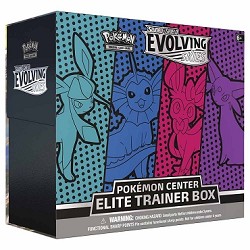