Royal Knights and the Crystal Cave

Written by Gabriel Smart on 10/5/2021 at category Deck Lists
Hey everyone, it's Gabriel Smart back with another article for everyone on PTCGO Store! I hope you all have been having an amazing week, and hopefully, everyone is enjoying the new cards that have been released from the brand new set Evolving Skies! Personally, I have been having a blast with the new format. The Pokemon Trading Card game feels fresh, and the 2020-2021 Pokemon Rotation has allowed for a plethora of fun, innovative, and rogue decks to take shape in the current format. Along with Evolving Skies becoming legal, some old decks have also been given new strength, and have asserted themself into the meta! If you need any PTCGO codes this is the best place to be! PTCGO Store offers you the best prices on the market, and they guarantee instant delivery of your PTCGO codes to your email address! Now let's take a dive deep into everything you need to know about Zacian Zamazenta!

Zacian pokemon online decks were the talk of the town when rotation landed upon us. Over the past few weeks, we have seen a handful of different Zacian archetypes that have appeared in events. Some of those variants include Zacian Inteleon, Zacian Medicham, Zacian Moltres, Zacian Ludicolo, and much more! With that being said, from my testing, I have come to the conclusion that Zacian Zamazenta is the number one variant! Now, let's take a look at the list. 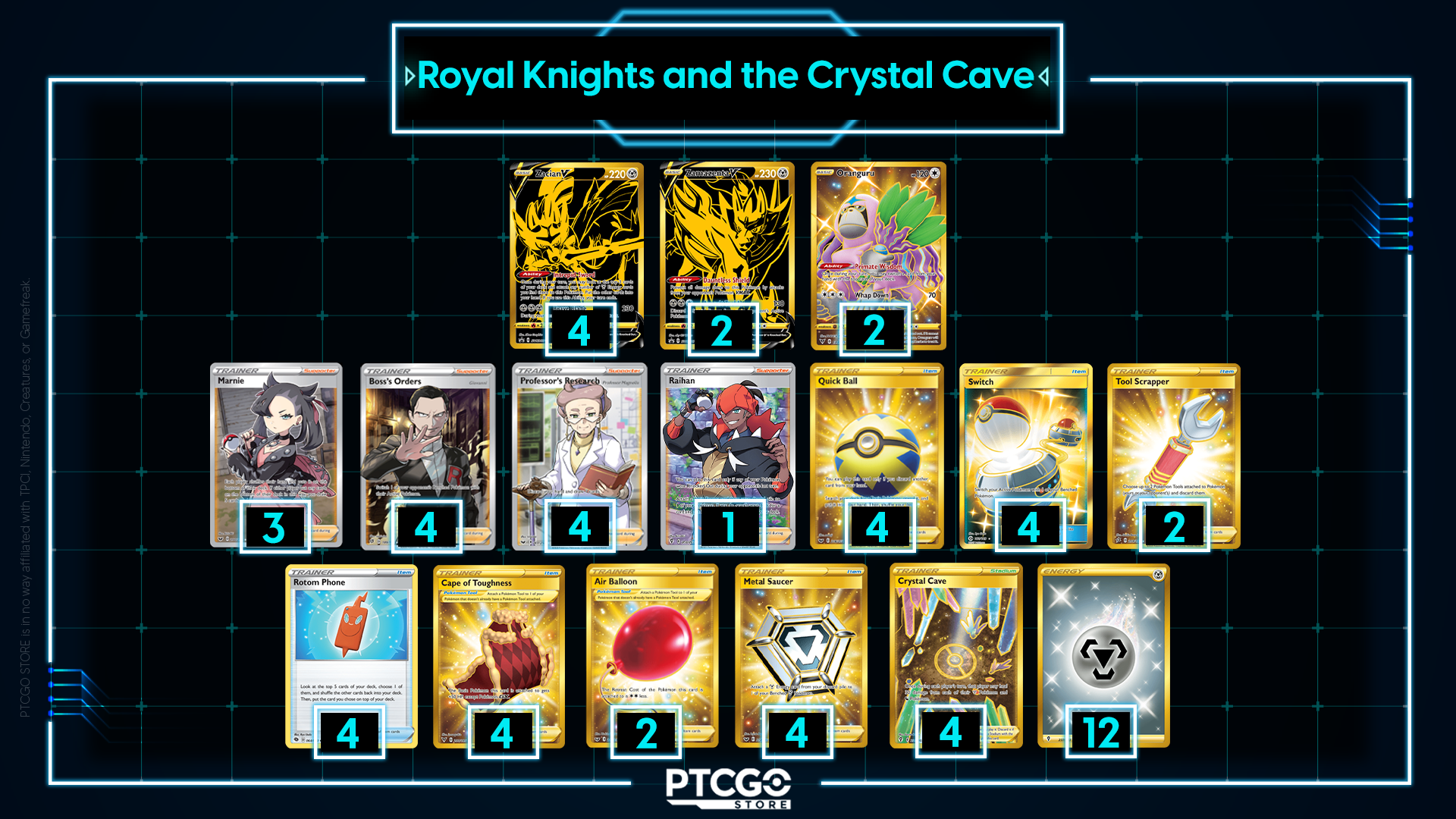 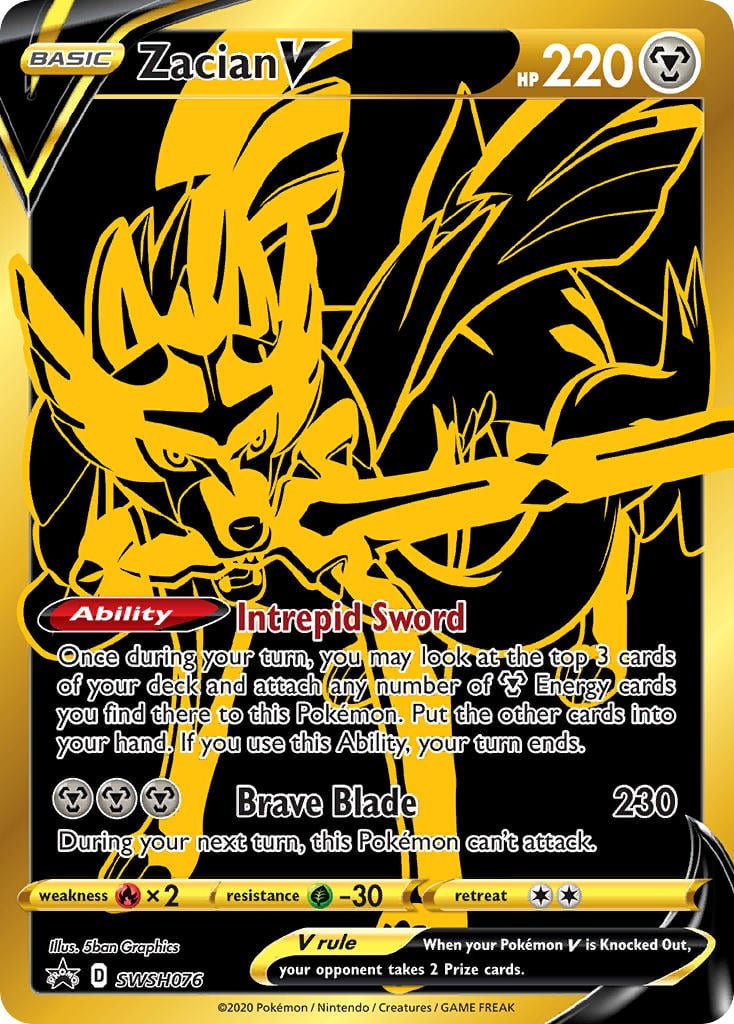 Since its release, Zacian V has been the poster boy of the Pokemon Trading Card game. Zacians Intrepid Sword ability, allows you to be able to consistently set up game after game. Zacians attack “Brave Blade”does 230 damage, and is able to consistently two-shot any Pokemon in the game. The combination of such a powerful ability, and a strong attack, has made Zacian able to dominate the TCG since its release! Zacian will serve as your main attacker in the early game. It is ideal to lead a game with 1-2 Intrepid Swords, and then follow up with a “Brave Blade”. Against VMAX decks it is critical that only one Zacian V is used, and then, make sure to follow up with twoZamazentaV’s (Sword and Shield). Although Zacian is your strongest overall attacker, that doesn't mean it is the best for every matchup. 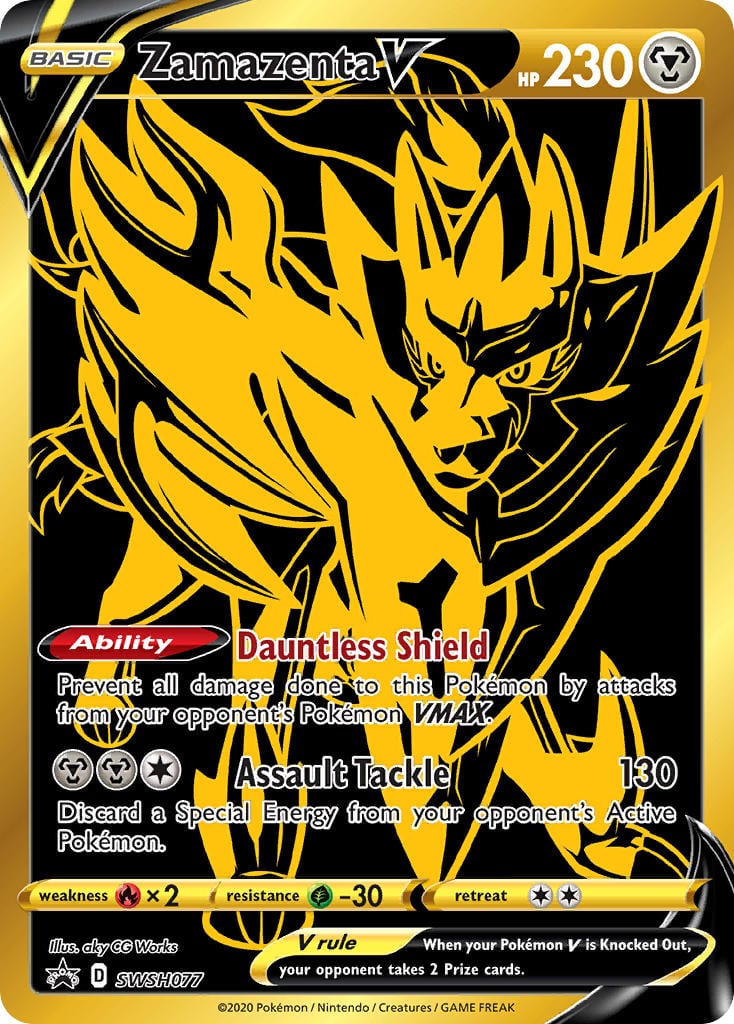 Zacian V’s legendary counterpart isZamazenta V(Sword and Shield)! This Pokemon does not pack quite as big of a punch as Zacian, but it has many other advantages! Zamazenta's ability “Dauntless Shield ''prevents all Pokemon VMAX from doing damage to it! With Pokemon VMAX taking up over half of the meta, it is crucial that this deck plays at least2 copies of Zamazenta! Although Zamazenta's ability is incredibly useful, its attack is also great! Although you will be walling your opponent VMAX’s, you will still need to be applying pressure with an attacker! Zamazenta’s attack “Assault Tackle” deals a respectable 130 damage, and also removes a special energy off the opponent's active Pokemon. Decks like Dragapult (Rebel Clash), Urshifu (Battle Styles), Leafeon (Evolving Skies), Jolteon (Evolving Skies), and more all play special energy, making this attack a great disruption option 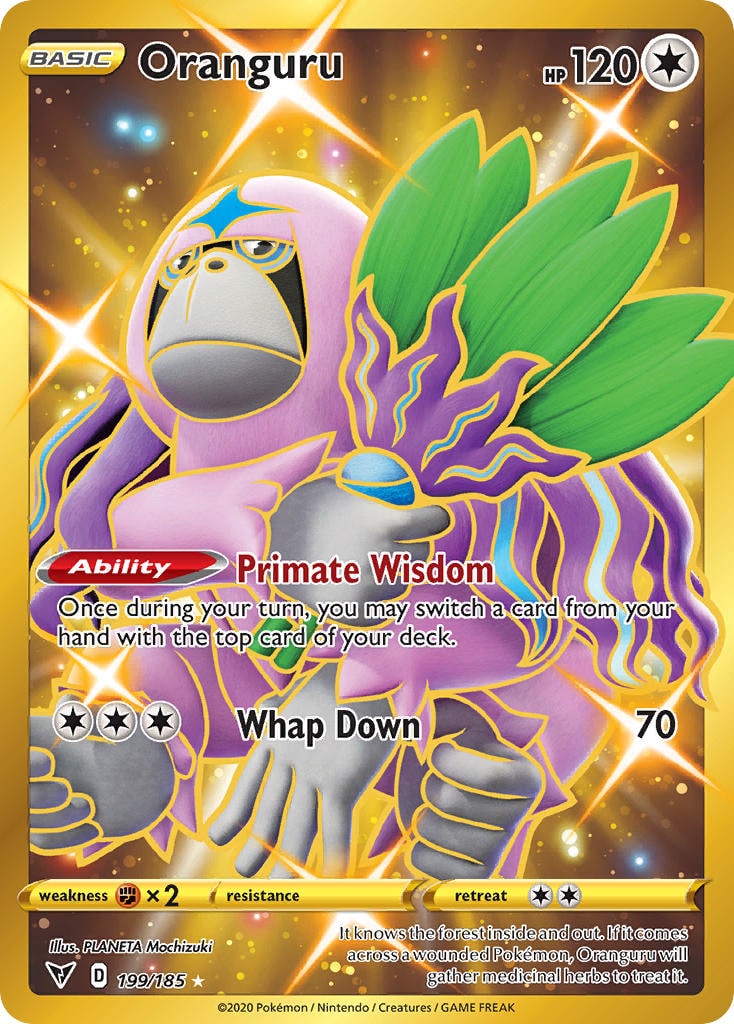 Oranguru (Sword and Shield) has been a card that has seen relative niche play since its release. Its ability, “Primate Wisdom”, has always been a great ability, but it never seemed to see consistent play in the meta. Now, it has found its home! Since Marnie’s (Sword and Shield) release date, it has terrified decks and has created quite a frustration for some players. Luckily, Oranguru is a great counter to that card! Orangurus Primate Wisdom ability will allow you to always stack the top of your deck with a supporter or any other playable card, which will typically prevent Marnie from winning games prematurely for your opponent. Along with its fantastic synergy with Marnie prevention, it also serves as an incredible way to accelerate energy onto the field. Zacian V’s “Intrepid Sword”: allows you to attach as much energy that you find on the top 3 cards, onto one of your Zacian. Similar to stacking a supporter on your deck, you can also stack energy from your hand, to be able to instantly attach it onto your Zacian with “Intrepid Sword”. This will create scenarios where you can consistently get two, and sometimes three energy turns one onto Zacian! 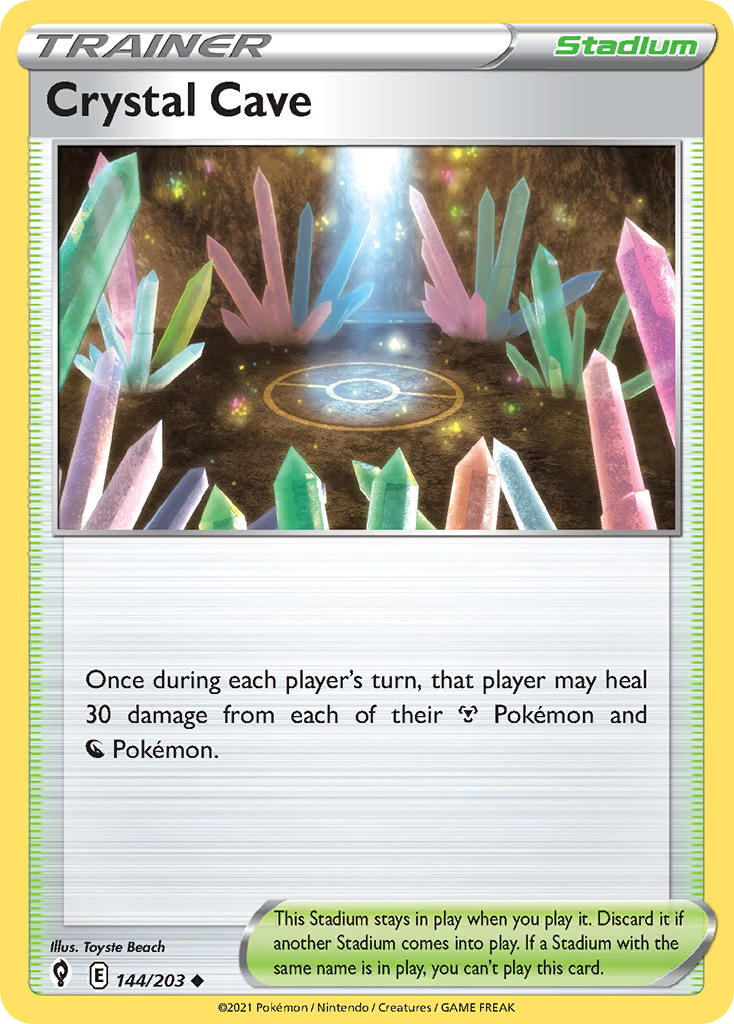 When the 2020-2021 Pokemon TCG rotation happened, Zacian decks lost a powerful ally. Lucario and Melemetal Tag Team GX rotated out of the format. Full Metal Wall GX provided a nice barrier on your Pokemon and made it difficult for the opponent to be able to take easy knockouts. With the new addition of Crystal Cave healing 30 damage a turn off metal Pokemon, it will allow us to be able to replace Lucario and Melemetal in the best way we can. Along with being a great healing stadium, it will provide a counter stadium to remove Path to the Peak from play. Decks like Dragapult VMAX (Rebel Clash), Jolteon VMAX (Evolving Skies), and more play Path to the Peak to combat Zamazenta V’s ability “Dauntless Shield”, making it critical to be able to remove that pesky Path from play! 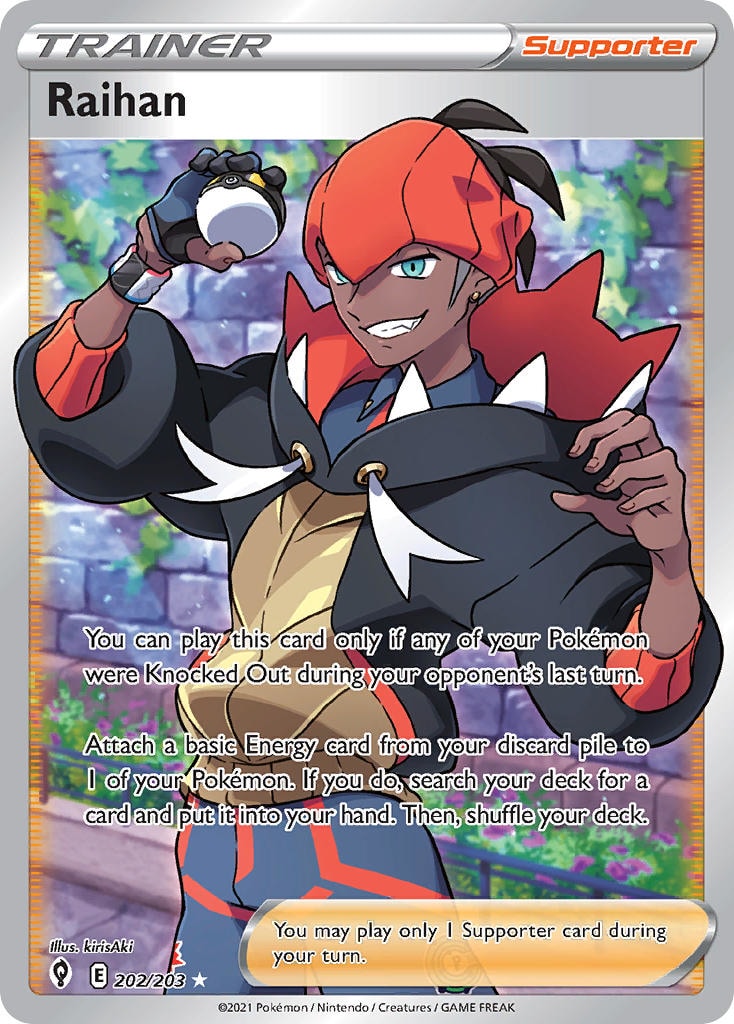 It seems like almost every Inteleon deck is playing this card, but very few non-inteleon variants have decided to add this card to their deck. The biggest reason is that it is simply too difficult to find this card without being able to search directly for it. Luckily, this deck has found a way around that. With the addition of four Rotom Phone and Oranguru, it makes it significantly easier to find, and utilize this powerful card! When playing against aggressive decks that take quick knockouts, it will be critical to responding with multiple attackers. Raihan will allowyou to get a free energy attachment, and search for valuable cards like Metal Saucer (Sword and Shield), to keep a steady flow of Zacians and Zamazentas! 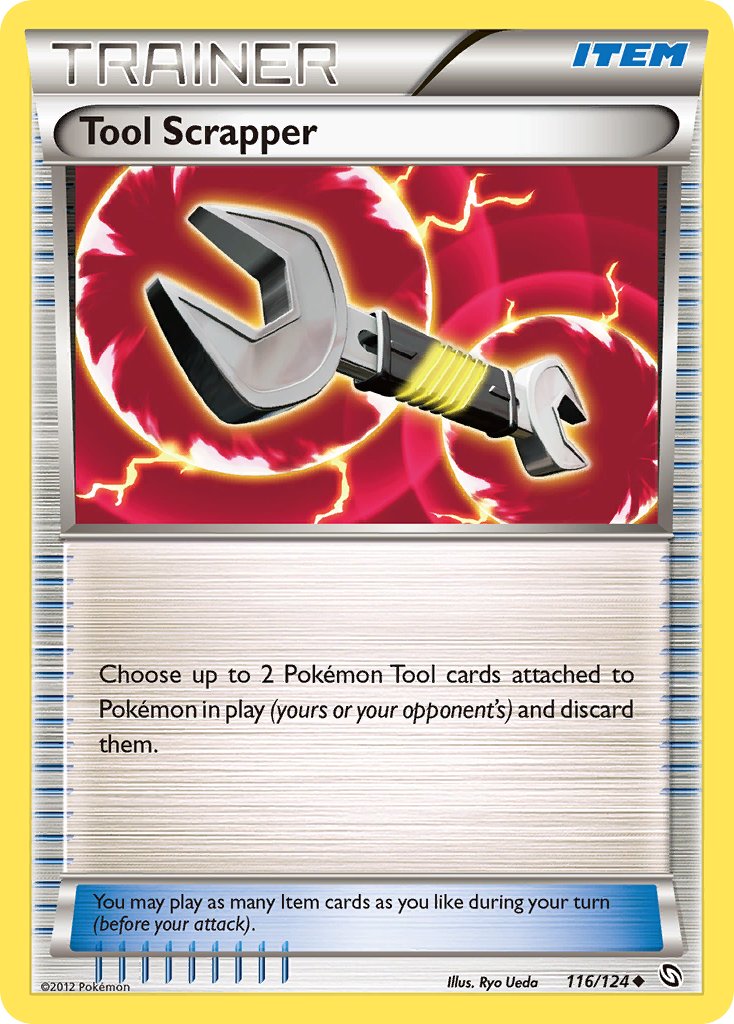 Since its original release in Dragons Exalted, Tool Scrapper has made its way in and out of decks for the past decade! In this current format, Tool Cards are one of the most impactful cards in the game. Tools like Air Balloon, Tool Jammer, Elemental Badge, Cape of Toughness, and more have made such a massive impact on the game. With all of these tools, Tool Scrapper serves as a great counter to them. Currently, I have two Tool Scrappers in this list, the biggest reason being the Zacian Zamazenta mirror, and Suicune variants. Suicune VLudicolo has been patrolling the top tables for quite some time, and that deck relies on the Cape of Toughness to be able to prevent itself from being knocked out by attacks like Brave Blade. Zacian Zamazenta has a cape for a similar purpose as well, so having the option to remove that tool card, and take a knockout with “Brave Blade” really swings the mirror match, along with the Suicune matchup! Having two copies will mean that you will almost always be able to find the card when you need it! 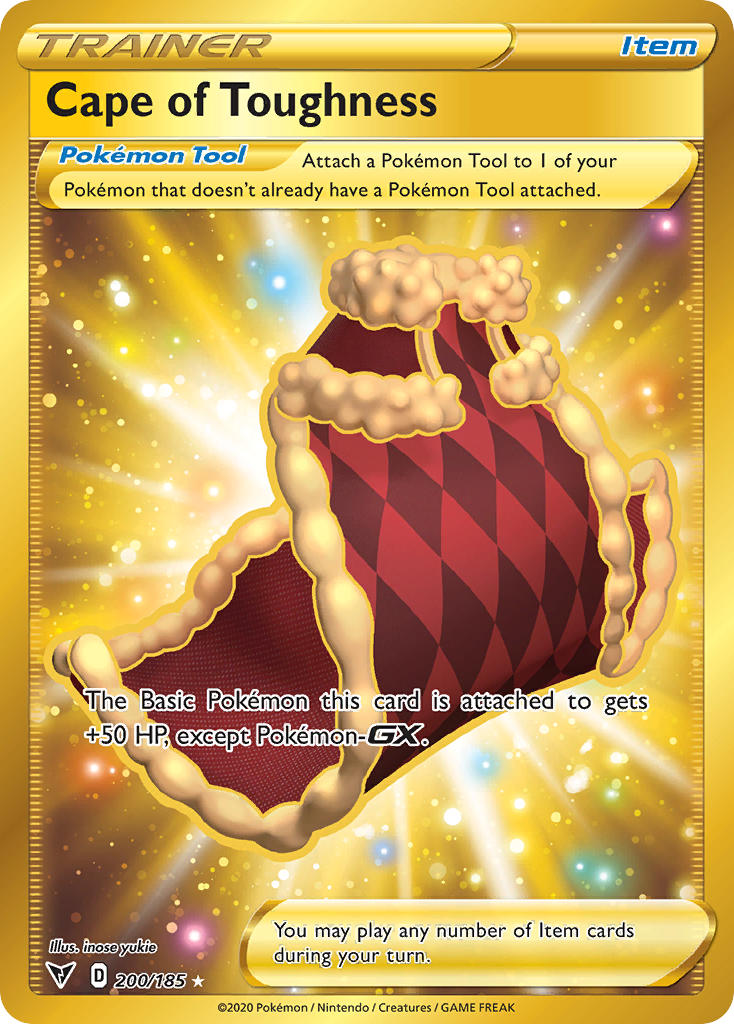 Speaking of Cape of Toughness, there are four copies in this deck! As stated above, this card is essential to prevent your Pokemon from being one shot to two quickly. Along with Crystal Cave, this is giving all of your Pokemon affectedly 300 HP, and will make it incredibly hard for your opponents to be able to knock out these Pokemon! One of the nicest things about this deck is that it is all one and two prize Pokemon, which means that decks will have to fight through 3 V Pokemon, and Cape of Toughness makes it that much harder for them to be able to do that! Currently, there are four of the count in this deck. I think that having four is critical because having four means you will be able to consistently find them, and boost these powerful Pokemons HP every game! 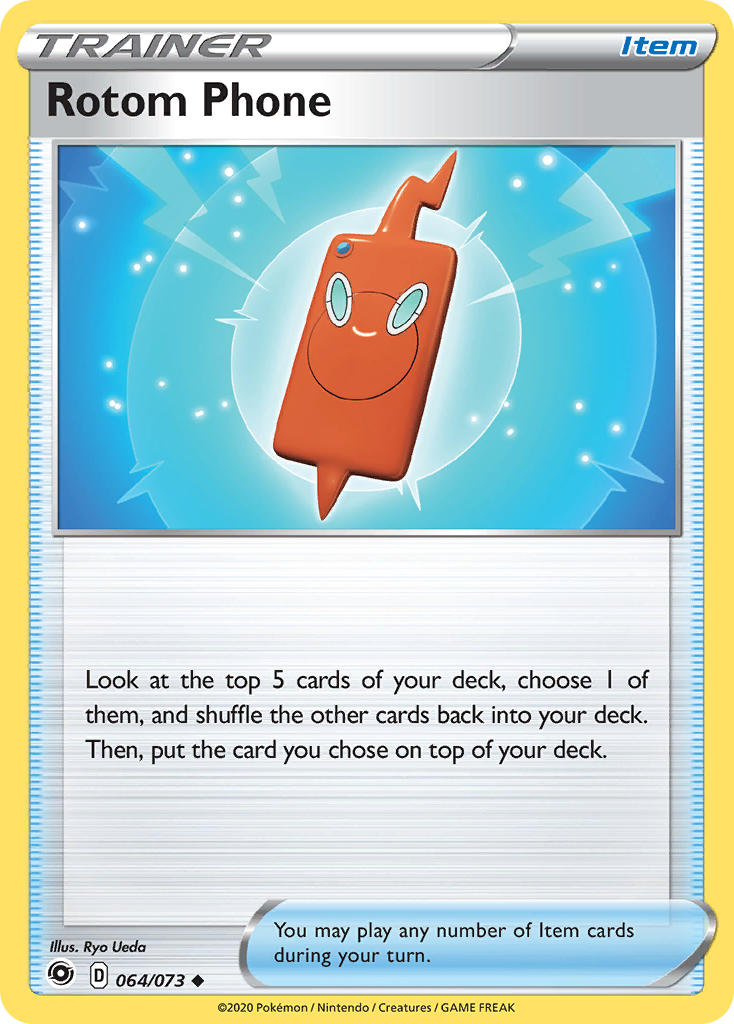 It seems that this deck has taken a lot of under-appreciated cards and turned them into powerful worthwhile options. Rotom Phone is just another example of that. Throughout its life span, this card has simply not seen very much play whatsoever. Luckily for it, this card has finally found a nice home in Zacian Zamazenta. Paired up with Oranguru, it provides a powerful combo where you can stack the deck with Phone, and then use “Primate Wisdom” to draw into that card you selected. Phone provides much-needed consistency to this deck and allows the deck to flow much better than it did beforehand. To be quite honest, this is one of the more underrated cards in the game, and I am excited to try it in other decks!

These are my current thoughts on Zacian Zamazenta! This deck over the past couple of weeks has exploded in popularity and is consistently being seen at the top tables. I am excited to continue to work on this deck, but this is the current 60 cards that I feel is the most optimal for now. As the meta develops, Zacian will always be around in some way, and it will continue to be viable until the day it rotates. Alright, that is all for me today, thank you so much for reading another one of my articles on the PTCGO Store. If you need PTCGL codes this is the place to be! I hope to speak with you again soon. 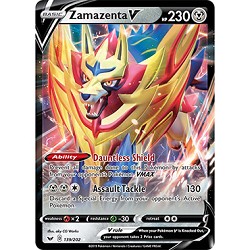