Written by Zach Lesage on 8/14/2021 at category Articles
We are finally going to get to see a few more “Fusion” cards, including some awesome cards like Dragapult Fusion. I’ve covered these new Pokemon twice before, both here - Fusion article 1 and Fusion article 2, and I wanted to make sure to cover all of the upcoming cards to keep PTCGO Store readers knowledgeable on the metagame. There are some spoilers in this article, but by reading this article you will stay above the rest of the competition in the knowledge! I’m certainly hyped for these new cards to release and I plan on covering a bunch of new Pokemon online decks once the set is fully revealed later in 2021. These cards won’t be out for a while, but you can pick up some PTCGO codes for other awesome sets right here at PTCGO Store. To make it even better, you can use code “zlesage5” to save 5% on your next order. Continuing on from my last article, let’s check out some more of the new “Fusion” mechanic! 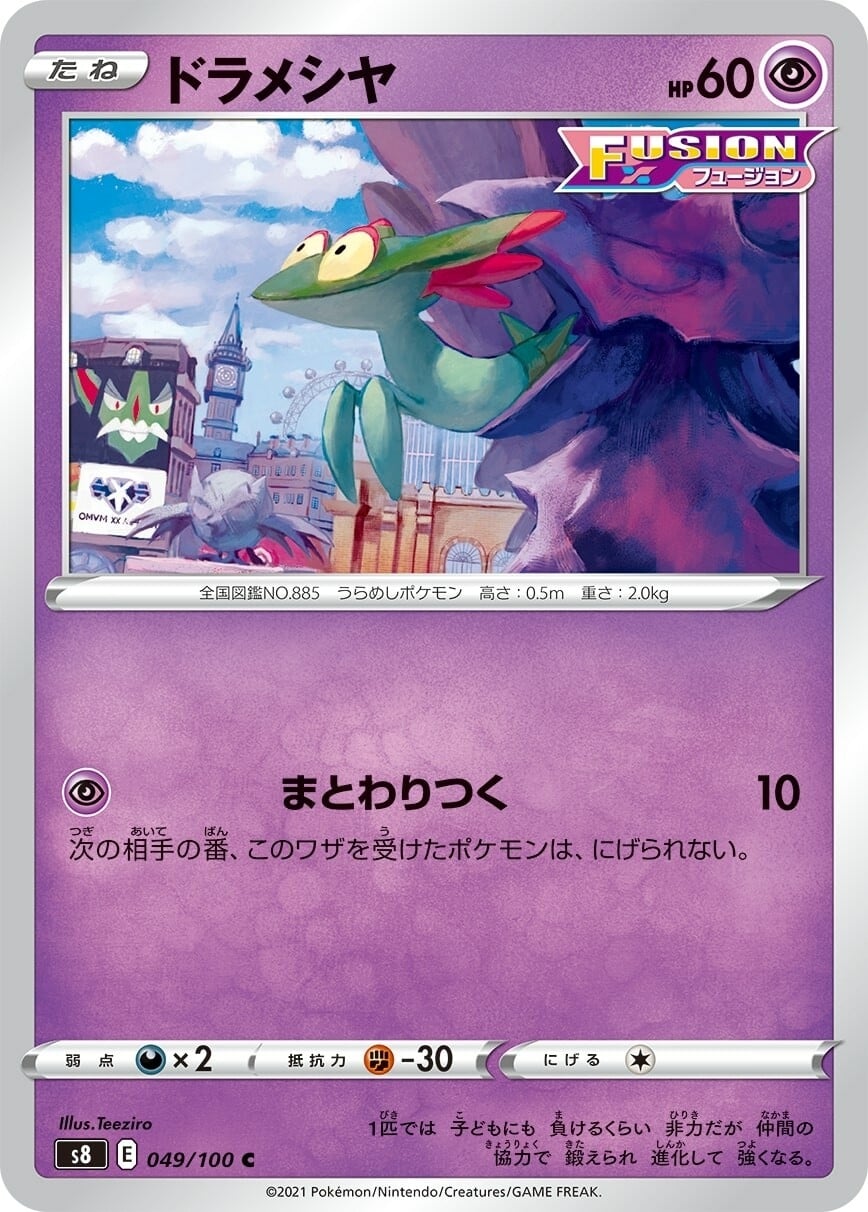 Another Basic Pokemon that Evolves… hmmm… I wonder if this one is gonna be playable! Let’s all hope for our pal Dreepy! Let’s look at this card:
Translation:
Dreepy
Basic Pokemon (Fusion)
Psychic Type - 60 HP
Infestation 10
During your opponent’s next turn, the Defending Pokemon can’t retreat.
As much as I was harsh on Clamperl in the Pt. 2 of this article, Dreepy seems slightly more promising! Even though Infestation does the same amount of damage as Bubble Burst, it can stop your opponent’s Pokemon from Retreating. I can’t count the amount of games that I’ve been able to steal from my opponents by stopping them from Retreating for a turn. Also, they don’t always have access to Switch (Sword and Shield) or Escape Rope (Battle Styles), so Infestation can slow them down a turn if you need it! To make Infestation even more viable, you can always play a Marnie (Sword and Shield) to reduce their hand size to take away their options. Also, let’s not forget that this Pokemon eventually Evolves into Dragapult, which should be slightly better. 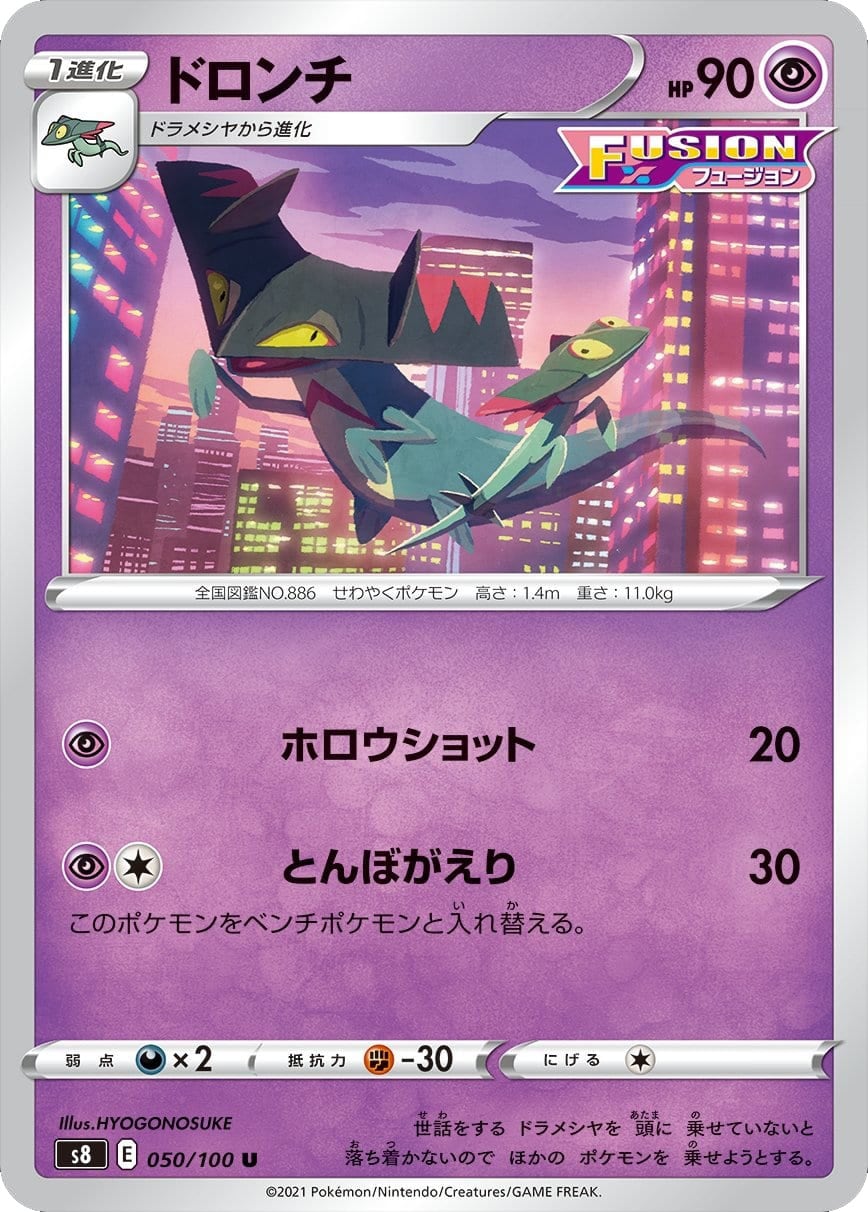 Well, out of all of the Stage 1 Fusion Pokemon I’ve reviewed so far, this is the only one that can Evolve into a Stage 2 so far! I’m not sure if that means this will be playable or not, but let’s check it out.
Translation:
Drakloak
Stage 1 (Fusion)
Psychic Type - 90 HP
Spooky Shot 20
U-Turn 30
Switch this Pokemon with 1 of your Benched Pokemon.
I’d say that Drakloak is arguably weaker than Dreepy, but I don’t want to take away the viability of U-Turn. The true strength of U-Turn comes from protecting Drakloak from impending doom. I’d argue that most Dragapult lists are going to play minimal amounts of Drakloak because Rare Candy (Sword and Shield) gets you to your Stage 2 Pokemon quicker, but we don’t know what other Fusion cards will come out that may support Drakloak.

This is the first Stage 2 Fusion Pokemon I’ve been able to review so far, so I have strong hopes for Dragapult. So let’s check this one out!
Translation:
Dragapult
Stage 2 (Fusion)
Psychic Type - 150 HP
Fusion Assault 30x
This attack does 30 damage times the number of Fusion Pokemon you have in play.
Speed Attack 120
Reasonably, this Pokemon is decently powerful because Fusion Assault can do 180 damage as long as all of your Pokemon in play are Fusion Pokemon. I’m not sure if having all of your Pokemon in play, being Fusion Pokemon, is a hindrance or not because Genesect V is awesome, but it’s still a requirement that has to be met. Unfortunately, the damage output is too little in our current format because most Pokemon V can hit more efficiently in terms of cards used. I could see this being great in a limited format, but likely not Standard. 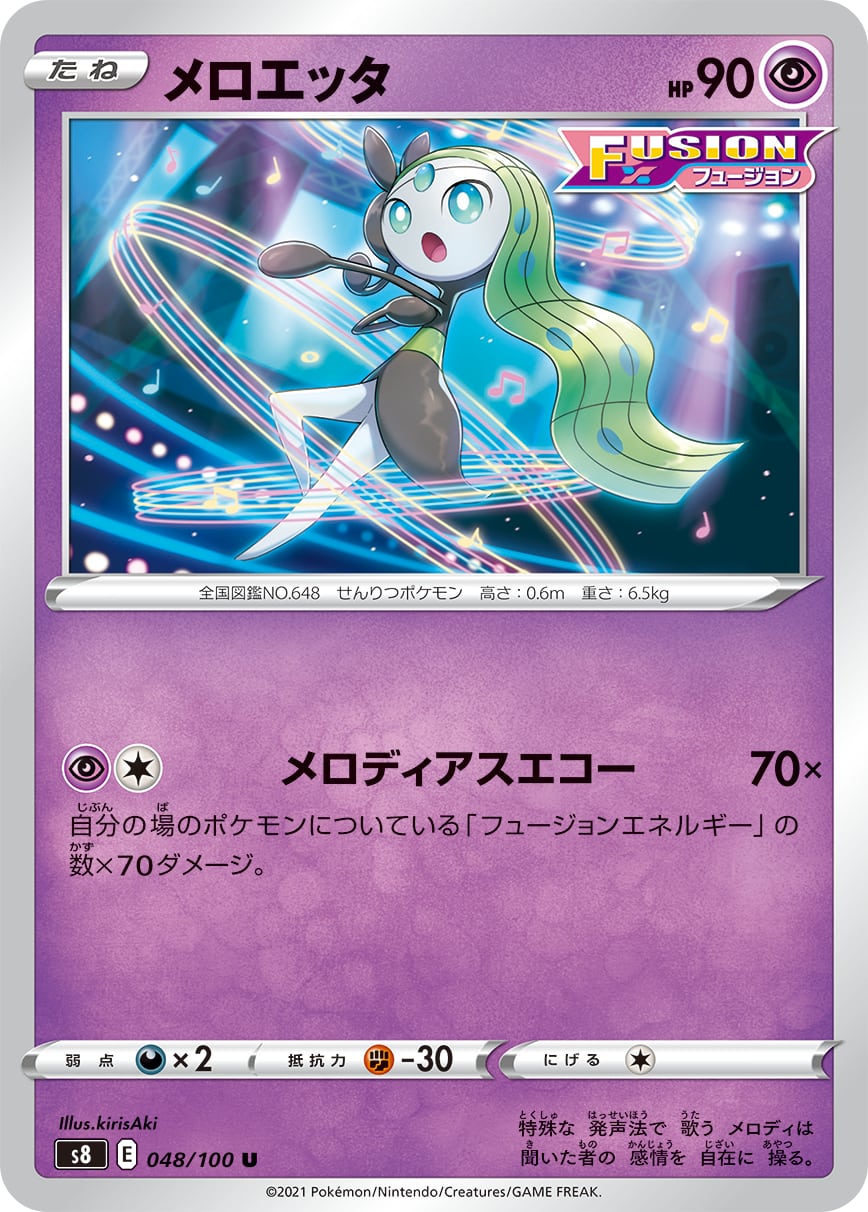 Meloetta historically hasn’t been the most successful Pokemon in the past, but maybe this one is slightly different? Here’s to hoping!
Translation:
Meloetta
Basic Pokemon (Fusion)
Psychic Type - 90 HP
Melodious Echo 70x
This attack does 70 damage times the number of Fusion Energy attached to your Pokemon.
Surprisingly Melodious Echo can hit hard quickly as long as you can get your Fusion Energy in play! This card has massive synergy with Elesa’s Sparkle because that card gets more Fusion Energy into play, and it boosts your attack’s damage output. In a perfect world, you can attach a Fusion Energy from your hand, play Elesa’s Sparkle to get out two more Fusion Energy, and swing for 210 with Melodious Echo. Looking briefly ahead, you can increase your damage with Power Tablet to bring that to 240, which OHKOs most Pokemon V in the format. If you miraculously get all four of your Fusion Energy in play, you can couple that with two copies of Power Tablet to swing for a boosted 340 damage to Knock Out most Pokemon VMAX. I think this card seems ok and it might be a decent single Prize Card attacking tech or an entire deck.

I’m a huge fan of Trainer cards, and this one is a Fusion Supporter! So I’m hyped to find out what Chili, Cilan, & Cress can bring to the table!
Translation:
Chili, Cilan, & Cress
Supporter (Fusion)
Search your deck for up to 3 Fusion Pokemon, reveal them, and put them into your hand. Then, shuffle your deck.
I like how this card isn’t specific to Evolution or Basic Pokemon, so it might actually see a play! Scratch that. I think this card actually has a chance to be absolutely dominating with the right engine! Think about this potential scenario; you can grab a Mew V, Genesect V, and Mew VMAX! You can Bench Mew V, attach an Energy to it, and draw cards with Genesect V. Since Genesect V exists, Chili, Cilan & Cress instantly becomes better because you have Pokemon search with a pseudo-draw effect. Like most other cards that deal with vague Fusion Pokemon, this card gets better with the more Fusion Pokemon that get released.

Looking at the first Fusion Item revealed so far shows high hopes for Power Tablet. Let’s check it out!
Translation:
Power Tablet
Item (Fusion)
During this turn, your Fusion Pokemon’s attacks do 30 more damage to your opponent’s Active Pokemon (before applying Weakness and Resistance).
Similar to Electropower (Lost Thunder), we have a stackable damage modifier available to any Fusion Pokemon; that sounds absolutely insane to me! However, Electropower was involved in many top-pacing Pokemon online decks and has won countless major events, so my hunch is that this card will succeed. Doubling up on that success, you have access to Mew VMAX that can copy your Fusion Pokemon attacks and do extra damage, which means you can potentially even factor in a type advantage. There isn’t much else to say except this card will likely see play in any Fusion Pokemon Pokemon online deck, especially those that need a little bit of a damage boost to hit relevant numbers. 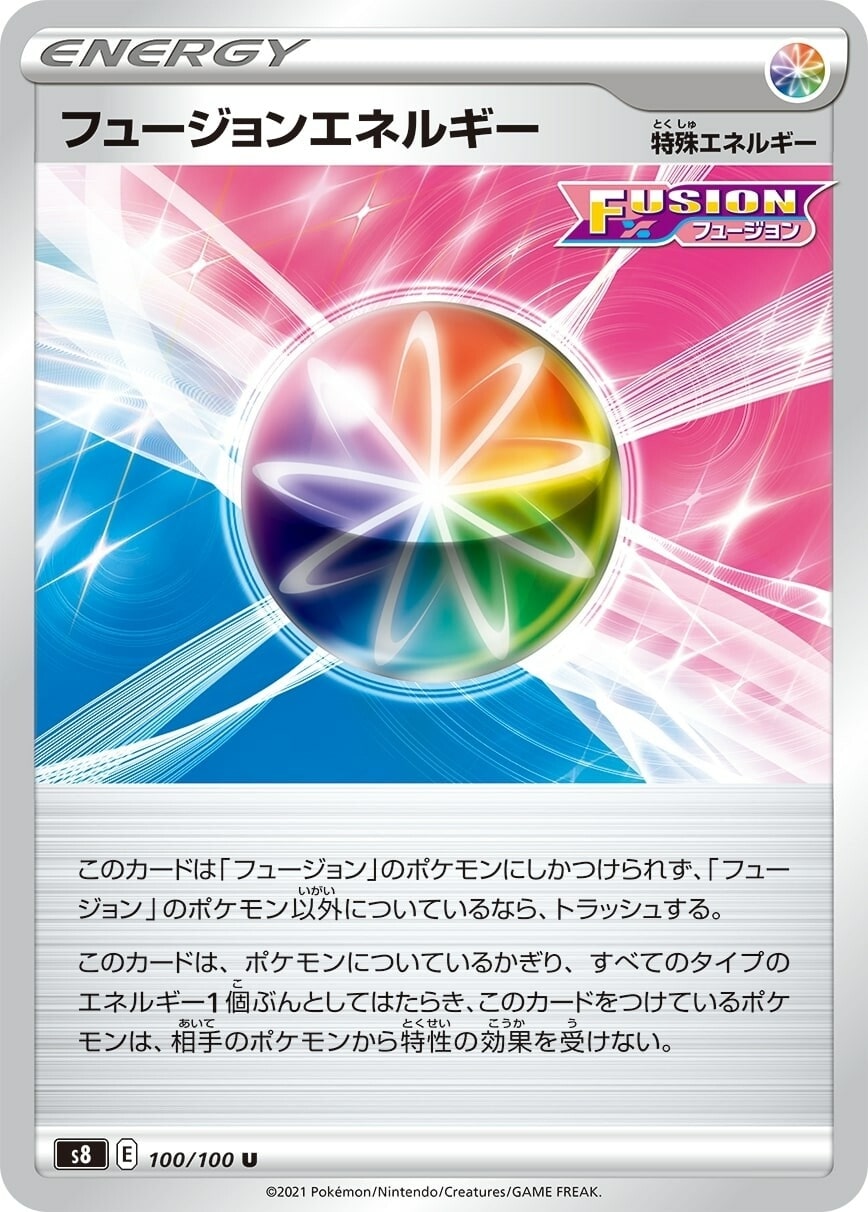 Most Special Energy finds its way into awesome Pokemon online decks. So let's check this one out!
Translation:
Fusion Energy
Special Energy (Fusion)
This card can only be attached to Fusion Pokemon. If it’s attached to a Pokemon that isn’t a Fusion Pokemon, discard this card.
While in play, this card provides every type of Energy but provides only 1 Energy at a time. The Pokemon this card is attached to isn’t affected by any Abilities from your opponent’s Pokemon.
Most specifically targeted Special Energy tends to be Rainbow Energy-Esque, and Fusion Energy isn’t any different. The bonus of this one is that the Pokemon Fusion Energy is attached to can’t be affected by any Abilities from your opponent’s Pokemon. With powerful Pokemon coming out, like Umbreon VMAX (Evolving Skies), and popular Pokemon, like Inteleon (Chilling Reign), dominating the game - this card seems like it can be clutch! With plenty of support already existing for this card, like Elesa’s Sparkle, I can only imagine this will be a highly successful card.

Well, that's some more of the new Fusion Pokemon cards released so far! I’m hyped to see what other cool cards will make their way into this upcoming set and shake up our PTCGO metagame! I personally think the game is headed in such a cool direction with all of these different “styles” of cards, and it reminds me of the great previous formats that many players cherish! It's totally an exciting time to play PTCGO / Pokemon TCG, so make sure you make the best of it by picking up some awesome code cards. You can always use code “zlesage5” to save 5% on your next order of PTCGO codes here at the PTCGO Store. Thanks for reading, and have a great day!