Written by Zach Lesage on 8/12/2021 at category Articles
Hey, what’s good PTCGO Store readers? Have you read my last article on the Fusion Pokemon cards  - New Fusion Pokemon #1? If you haven’t, you totally should because this article will be showcasing some different Fusion Pokemon. These cards are similar to Single Strike and Rapid Strike Pokemon because it has a “Fusion” stamp that lets everyone know it’s “style”. These cards are releasing in Japan and we will eventually get them everywhere else later in 2021. I’m personally hyped because these cards remind me of Tag Team Pokemon mixed with SP Pokemon (yeah, I’ve been playing that long) so I have high hopes for the future of the game! While these cards aren’t out quite yet, you can still always pick up some PTCGO codes for other sets right here at PTCGO Store. On top of that, you can use code “zlesage5” to save 5% on your next order. Continuing on from my last article, let’s check out some more of these cards! 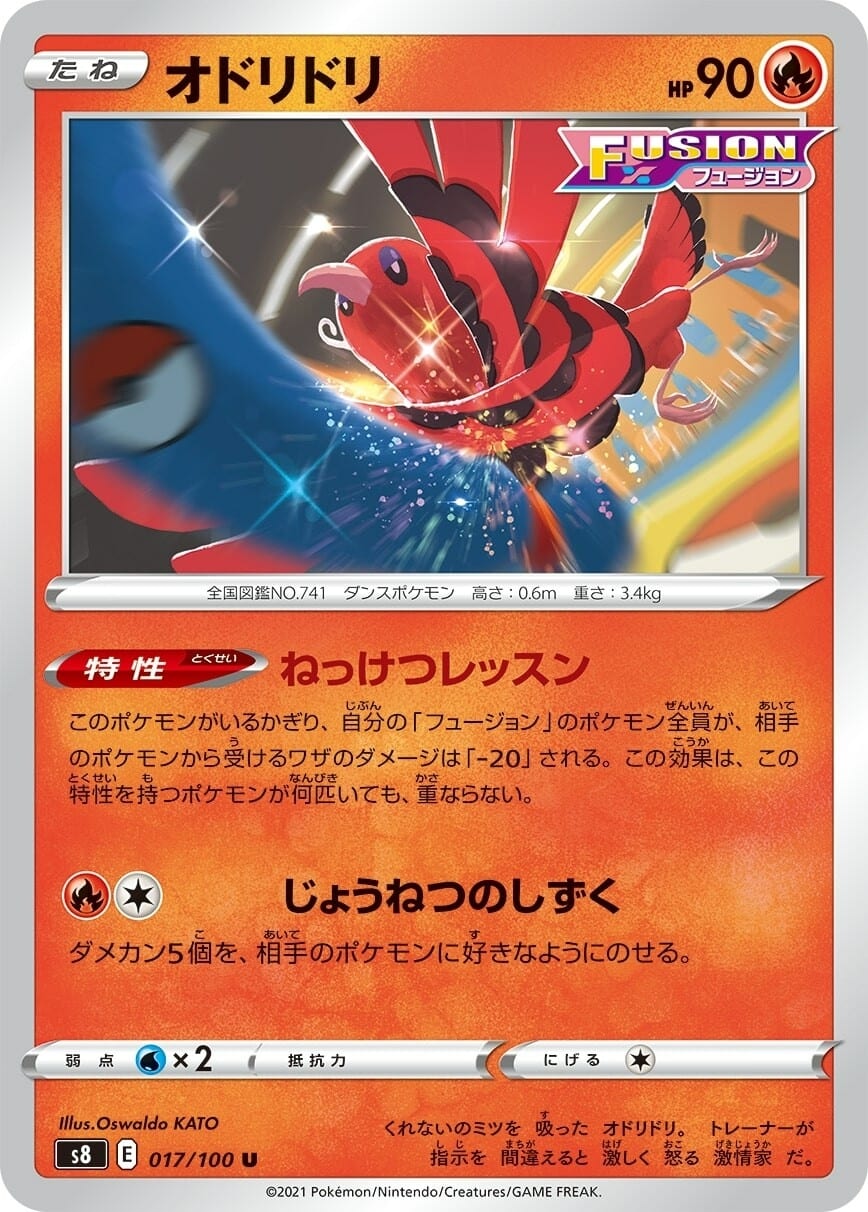 I remember Oricorio (Guardians Rising) being one of the best cards in a previous format, so I’m always excited for a new Oricorio to get released. So let’s check this one out!
Translation:
Oricorio
Basic Pokémon (Fusion)
Fire Type - 90 HP
Ability: Fervent Lesson
As long as this Pokémon is in play, your Fusion Pokémon takes 20 less damage from your opponent’s attacks. You can’t apply more than 1 Fervent Lesson Ability per turn.
Passionate Drop
Put 5 damage counters on your opponent’s Pokémon in any way you like.
I like how Oriciorio continues with the Fusion Pokémon mechanic because it provides another helpful tool! I’m sure Fervent Lesson will be relevant in some Pokémon Online decks more than others, but I’m a fan of options. One of my personal favorite aspects of Pokémon is when you have a card that does something unique. In some cases, like our immediate Post Rotation Sword and Shield - on format, there aren’t any Pokémon that protect your Bench, like Mew (Unbroken Bonds). In this case, we never had a solid damage reduction Pokémon , so even if this card never becomes relevant, it’s always an option! I think Passionate Drop will be relevant with Mew VMAX, that is, if Oriciorio is necessary for the deck, because having a damage counter snipe attack seems clutch! Oricorio seems like a unique inclusion to our game, so I’m totally hyped to release it! 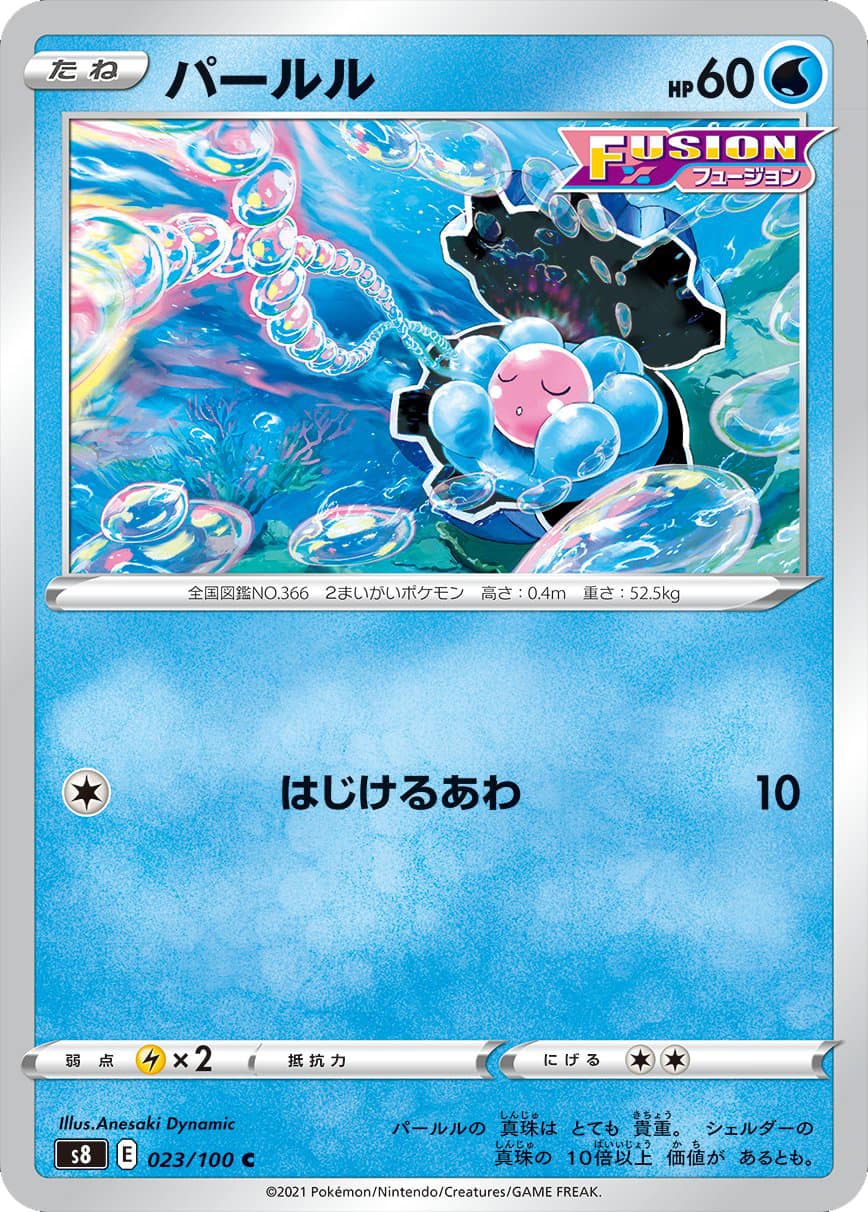 Clamperl is a Basic Pokémon that Evolves into either Huntail or Gorebyss, but it typically is a weaker Pokémon . So I’m not expecting much, but let’s see what this card can offer!
Translation:
Clamperl
Basic Pokémon (Fusion)
Water Type - 60 HP
Bubble Burst 10
Honestly, cards like Clamperl are tough to play with because they offer nearly nothing to the game. This Pokémon only exists to Evolve, and it doesn’t even have a cool option to block an attack, Paralyze your opponent, or even reduce damage! Since Bubble Burst is extremely easy to decipher, be sure to look for other Clamperl options that might exist. Whether you’re playing Standard or Expanded, there’s always a chance there is a better card to replace this one, or maybe this is the best Clamperl because it's a Fusion Pokémon. Either way, beyond this Pokémon Evolving and being a Fusion Pokémon, it’s kinda meh. Hopefully, its Evolution Pokémon makes it worthwhile! 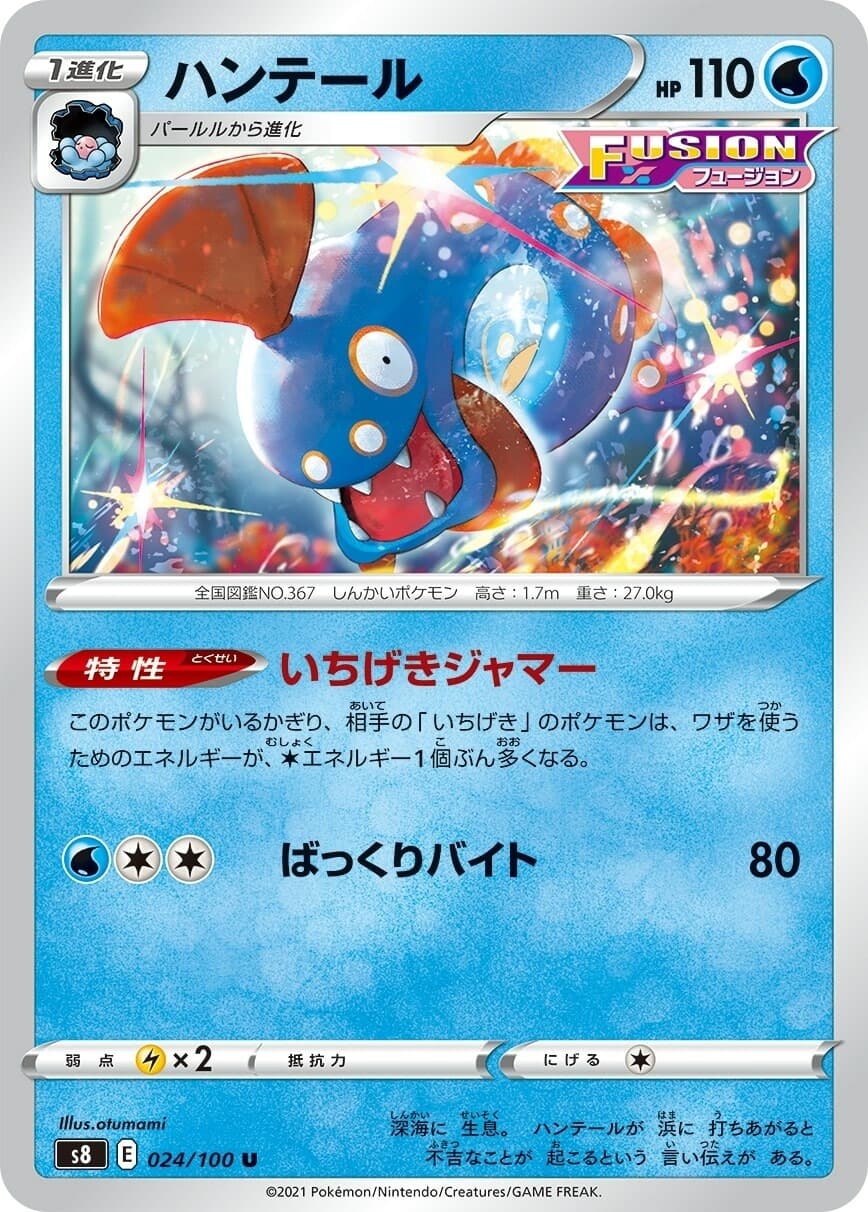 Now we're getting somewhere! I know Clamperl was a little disappointing, but it could look up here! Huntail is the Evolved form of Clamperl so let’s see what we’re working with.
Translation:
Huntail
Stage 1 (Fusion)
Water Type - 110 HP
Ability: Single Strike Jammer
As long as this Pokémon is in play, your opponent’s Single Strike Pokémon require [C] more Energy to use attacks.
Cavernous Chomp 80
This is certainly an exciting card because it doesn’t block a specific type of Pokémon. Instead, it blocks an entire “style” of Pokémon! Single Strike Pokémon typically aren’t as played as Rapid Strike Pokémon, but if they continue to get printed, I’m sure we’ll see Huntail pop into Pokémon Online decks sooner than later! Like what I was saying about Oricorio, it all comes down to the options available as a deck builder. Finding answers to questions like, “How can I beat Single Strike decks” and having this as a readily available answer is huge! Now I’ve peeped the Gorebyss too, and we’ll have to check that one out too! 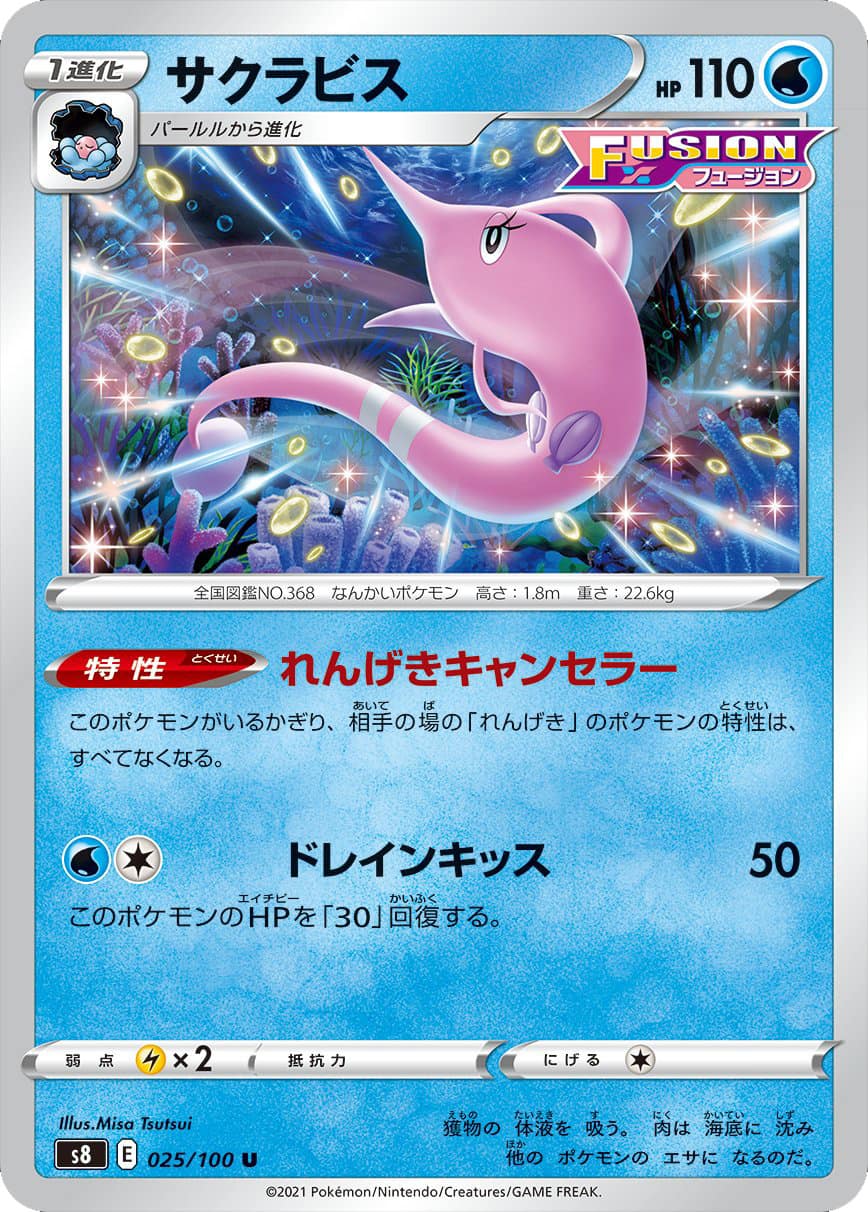 With Clamperl having the option of Evolving into two different Pokémon, either Huntail or Gorebyss, there are many options when it comes to deck building. If Gorebyss has any Ability similar to Huntail, this card will definitely see play. Let’s check it out.
Translation:
Gorebyss
Stage 1 (Fusion)
Water Type - 110 HP
Ability: Rapid Strike Canceller
As long as this Pokémon is in play, your opponent’s Rapid Strike Pokémon have no Abilities.
Draining Kiss 50
Heal 30 damage from this Pokémon.
Like Huntail, this Pokémon blocks another “style” of Pokémon- this time being Rapid Strike Pokémon. I feel like Rapid Strike Pokémon have more Abilities that can be shut off than Single Strike Pokémon are played, so this card instantly seems better (I could be missing a Single Strike concept from Evolving Skies). If we look at a typical Rapid Strike Urshifu VMAX (Battle Styles) list, you would likely block Passimian (Chilling Reign) and Inteleon (Chilling Reign), which would stop a decent bit of damage coming your way! If that's a matchup that you struggle against, Gorebyss might be a hot tech for your Pokémon online deck! As more and more Single Strike and Rapid Strike cards get printed, I’m sure both Huntail and Gorebyss will see action. They might not always be viable, but you’ll always want to have a couple of copies of each in case you’re expecting some certain matchups! 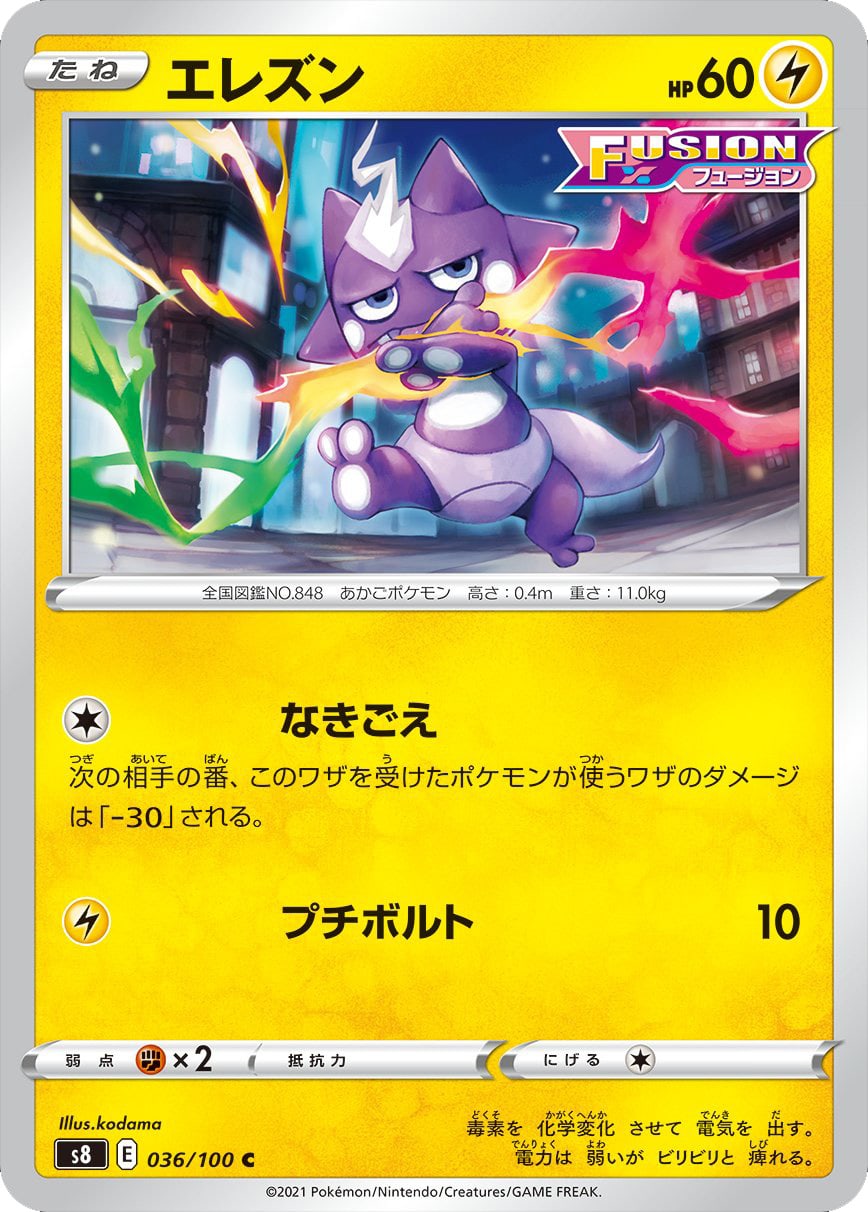 Like Clamperl, I don’t think Toxel will be super hot, but we might as well look at it! So let’s peep this Toxel!
Translation:
Toxel
Basic Pokémon (Fusion)
Lightning Type - 60 HP
Growl
During your opponent’s next turn, the Defending Pokémon's attacks do 30 less damage (before applying Weakness and Resistance).
Baby Bolt 10
I already went over cards like this when I wrote about Clamperl… Toxel is a placeholder to Evolve into Toxtricity! With both of these Pokémon coming out in our Sword and Shield format, there are other versions of these cards in Standard, which means there might be a better Toxel for your deck. Make sure you read all of the Abilities of your Pokémon first, in case you need all of your Pokémon in play to be Fusion Pokémon, but there could be other options available. Let’s peep out Toxtricity! 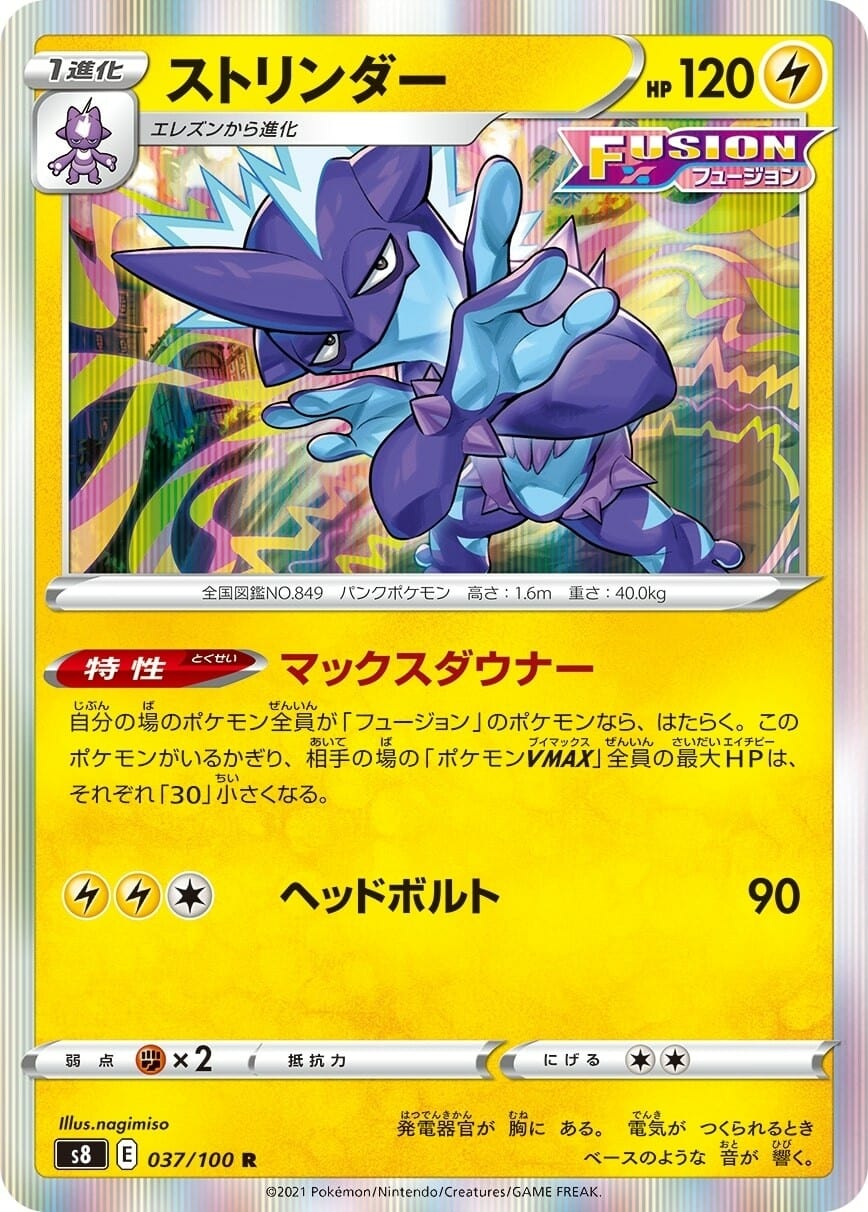 Ok, ok, let’s hope that Toxtricity is better than Toxel! I’m sure it has to be, right? Well, let’s check this Pokémon out!
Translation:
Toxtricity
Stage 1 (Fusion)
Lightning Type - 120 HP
Ability: Max Downer
This Ability only works if all of your Pokémon in play is Fusion Pokémon. As long as this Pokémon is in play, the HP of your opponent’s VMAX Pokémon is 30 less.
Head Bolt 90
Similar to most other Fusion Pokémon, Toxtricity has a great Ability that can actually lower the HP of all of your opponent’s VMAX Pokémon! Now, this is going to be extremely archetype-dependent because Max Downer only works if all of your Pokémon in play is Fusion Pokémon, so this can’t be a simple tech in an Ice Rider Calyrex VMAX (Chilling Reign) deck. However, if your Fusion Pokémon deck has been struggling to reach those OHKOs / 2HKOs, this might be the tech you’ll want to include in your deck! If not, it could be entirely metagame-dependent too! However, from my early understanding of Sword and Shield format, VMAX Pokémon runs rampant, so I could see this awesome card in the right deck!

Well, that's some more of the new Fusion Pokémon cards released so far! I’m hyped to see what other cool cards will make their way into this upcoming set and shake up our PTCGO metagame! I personally think the game is headed in such a cool direction with all of these different “styles” of cards, and it reminds me of the great previous formats that many players cherish! It's totally an exciting time to play PTCGO / Pokémon TCG, so make sure you make the best of it by picking up some awesome code cards. You can always use code “zlesage5” to save 5% on your next order of PTCGO codes from the PTCGO Store. Thanks for reading, and have a great day! 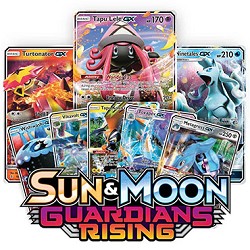