A New World of Pokemon

What’s up PTCGO Store readers? Have you heard the news? There is a new style of Pokemon cards and they are Fusion Pokemon cards. Similar to past mechanics, like Single Strike and Rapid Strike, these cards feature a “Fusion” stamp at the top of the card to help identify its “style” compared to other cards. These cards are releasing soon in Japan with a tentative release date of October or November worldwide. I’ve personally been hyping these cards up to my friends and I want to share my early thoughts on them with you in this article. While these cards aren’t out quite yet, you can still always pick up some PTCGO codes for other sets right here at PTCGO Store. On top of that, you can use code “zlesage5” to save 5% on your next order. Anyways, let’s look at some of these new cards: 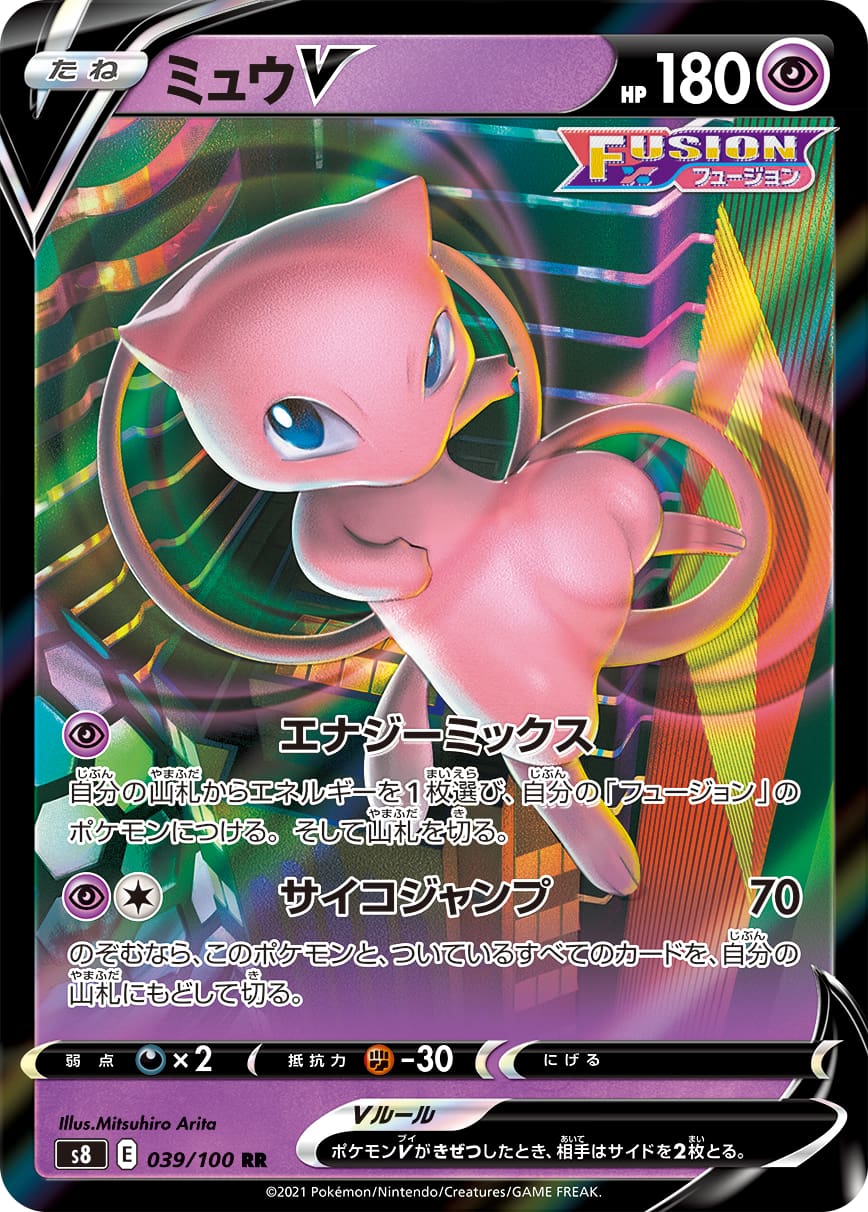 Mew is historically a powerful Pokemon in the game so I’m hyped to learn more about this one!
Translation:
Mew V
Basic Pokemon (Fusion)
Psychic Type - 180 HP
Energy Mix
Search your deck for 1 Energy and attach to 1 of your Fusion Pokemon, Then, shuffle your deck.
Psycho Jump 70
You may shuffle this Pokemon and all cards attached to it into your deck.
I should start off by saying that Mew V seems cool! I like how it has an Energy acceleration attack, a way to hit-and-run back into the deck, and that it has free Retreat! I should also note that Mew V Evolves into Mew VMAX which means this card can get even better! Most Pokemon V that Evolve into a VMAX typically aren’t as powerful as Pokemon V that don’t Evolve so I’m happy this card has some options. 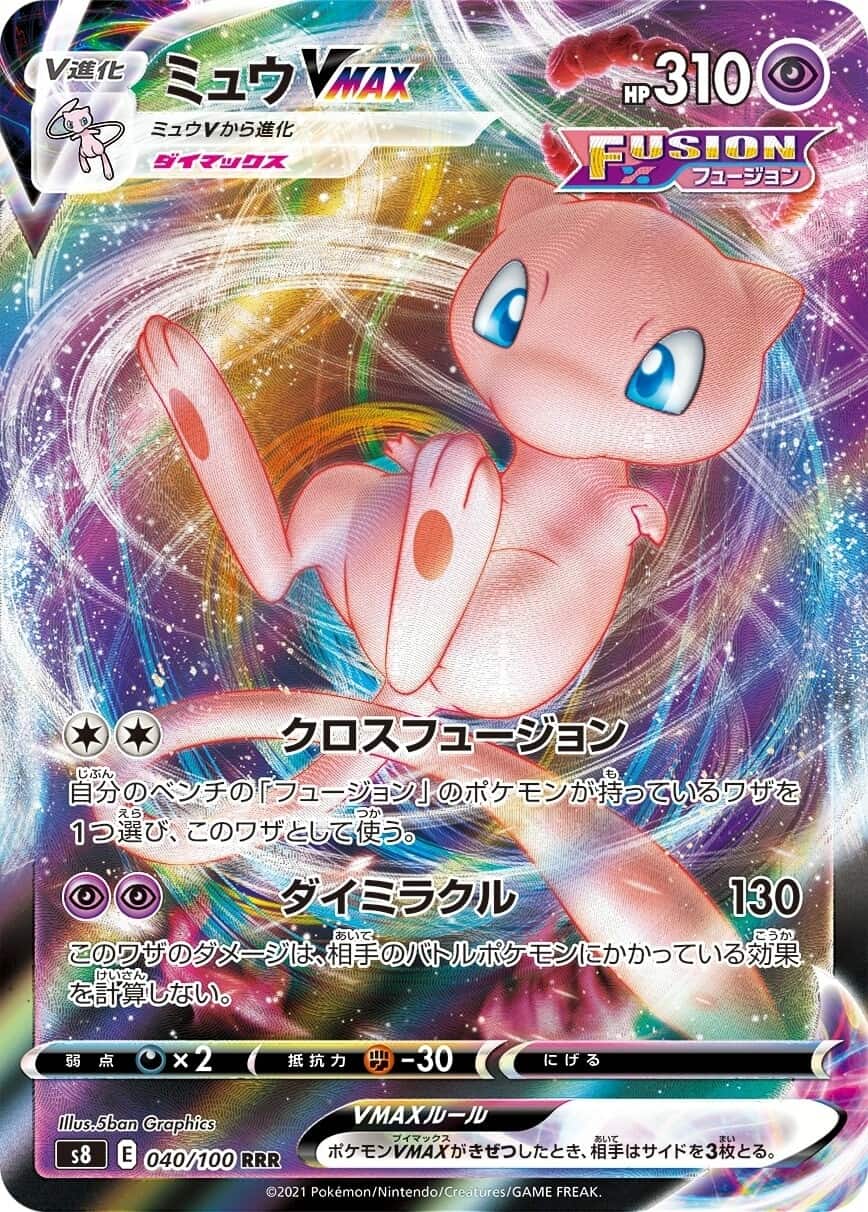 I can already sense the collectors going wild for this one! Let’s look at this card to see what the players are working with!
Translation:
Mew VMAX
VMAX Pokemon (Fusion)
Psychic Type - 310 HP
Cross Fusion
Choose an attack on 1 of your Benched Fusion Pokemon and use it as this attack.
Max Miracle 130
Damage from this attack isn't affected by any effects on your opponent’s Active Pokemon.
This is where I start to get super excited as a player! Cross Fusion is similar to other dominating Pokemon we’ve seen in the past, like Mewtwo & Mew-GX (Unified Minds), because you can copy attacks and use them as your own! As a super awesome bonus, Cross Fusion takes away the necessary Energy cost for those Fusion Pokemon attacks which means you have some cool plays you can make. If you can get out a Pokemon with a crazy high attack cost on your Bench, Mew VMAX can copy it for only two Colorless Energy. As long as they print Fusion Pokemon, this card will continue to get better and better. The icing on top of the Alcremie is Max Miracle going through any effects! There is a reason why players play cards like Aegislash V (Vivid Voltage) to go through things like Decidueye (Darkness Ablaze) - this card has that built-in! Top that off with free Retreat and we have one of the best cards in recent memory coming out in a few months. 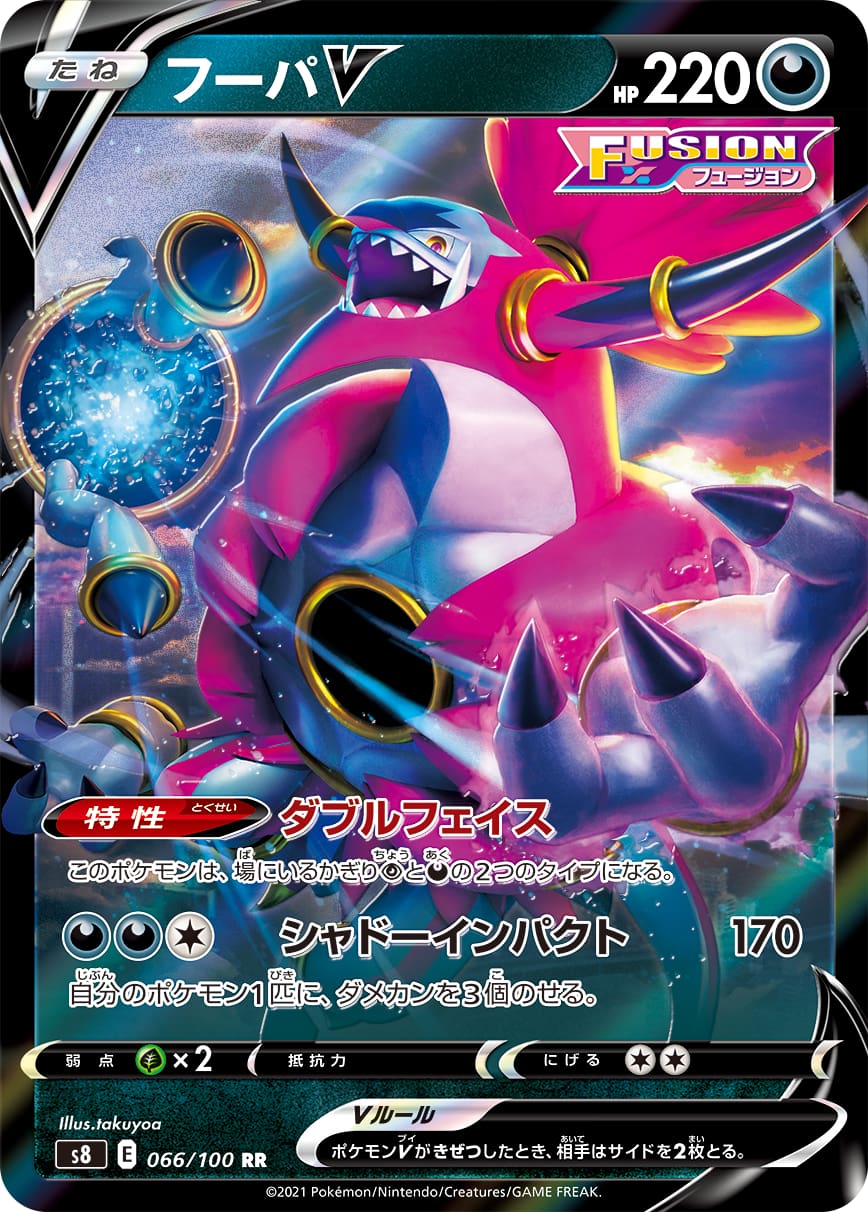 Hoopa, as a Pokemon, will typically find its way into the best Pokemon Online decks, let’s see if this one is any different!
Translation:
Hoopa V
Basic Pokemon (Fusion)
Darkness Type - 220 HP
Ability: Double Face
As long as this Pokemon is in play, it's both [P] and [D] type.
Shadow Impact 170
Put 3 damage counters on 1 of your Pokemon.
My first thought when it comes to any new Darkness-type Pokemon is to add them into an Eternatus VMAX (Shining Fates) Pokemon Online deck and this card isn’t any different. Being able to add a different type of Pokemon to an Eternatus VMAX deck has been an impossible task in the past, but with Double Face, this Pokemon still counts as a Darkness-type Pokemon for Eternal Zone. This could give Darkness-type counters, like Rapid Strike Urshifu VMAX (Battle Styles), a run for their money because 170 damage x2 = 340 damage! It might be difficult to accelerate Energy onto this Pokemon, but Energy Switch (Sword and Shield) and Galarian Moltres V (Chilling Reign) could certainly help out. 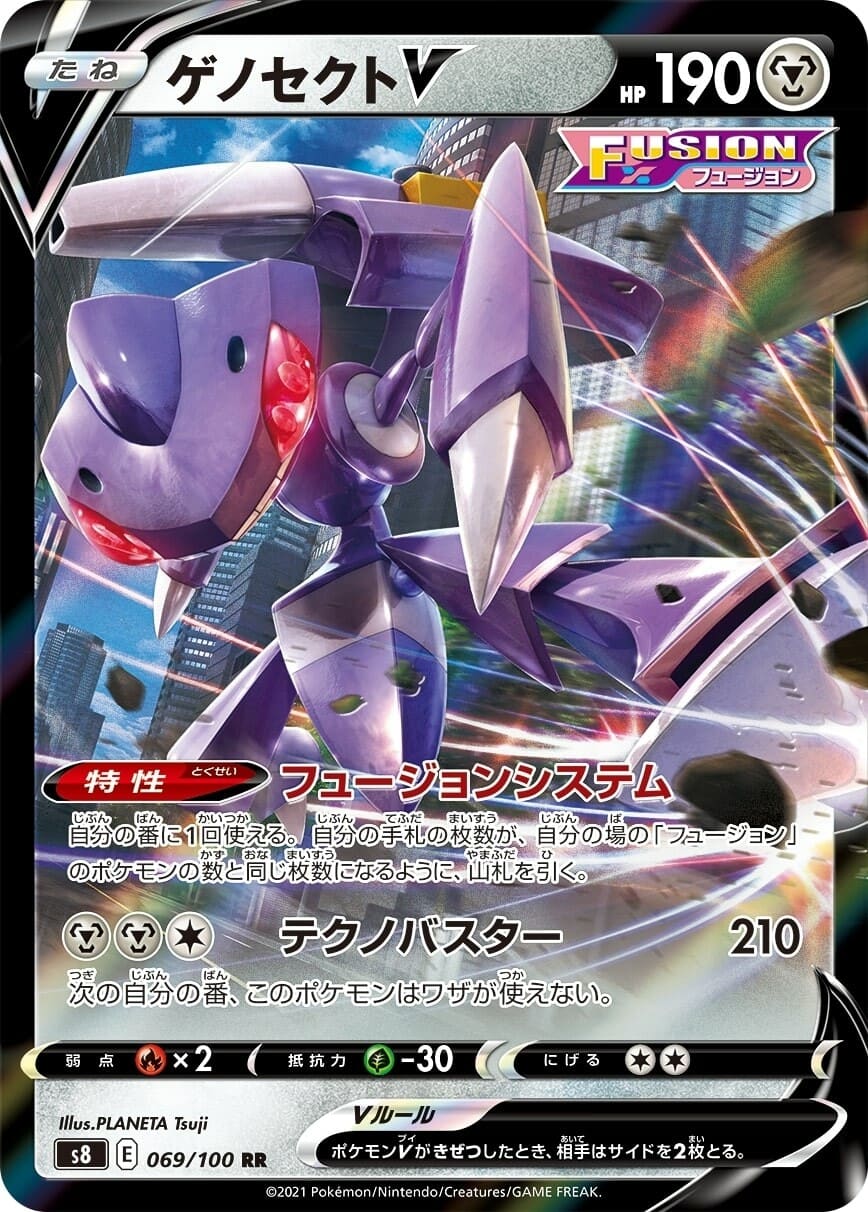 The last time we’ve truly had a playable Genesect was five years ago, let’s see if this one can fill that gap!
Translation:
Genesect V
Basic Pokemon (Fusion)
Metal Type - 190 HP
Ability: Fusion System
Once during your turn (before your attack), you may draw cards from your deck until the number of cards in your hand equals the number of Pokemon Fusion you have in play.
Techno Blast 210
This Pokemon can't attack during your next turn.
Metal type Pokemon have been overlooked for years, until Sword and Shield when we got Metal Saucer (Sword and Shield). Nowadays, we look at attacks like Techno Blast and quickly realize that we can be hitting for a decent chunk of damage in a turn or two. The real treat when it comes to this card is its Fusion System Ability! Drawing cards from an Ability is awesome, y’all remember Dedenne-GX (Unbroken Bonds) still right? Well, this card doesn’t have a cap on the amount of times you can use the Fusion System per turn! Of course, you can only use one Ability per Genesect V, but you can use Fusion System with a bunch of Fusion Pokemon in play, draw cards, play cards from your hand, and use Fusion System on a different Genesect V! I think this card has plenty of potential as a draw engine in Fusion Pokemon Online decks and will likely see a play at the top tables! I’m beyond hyped for this card! 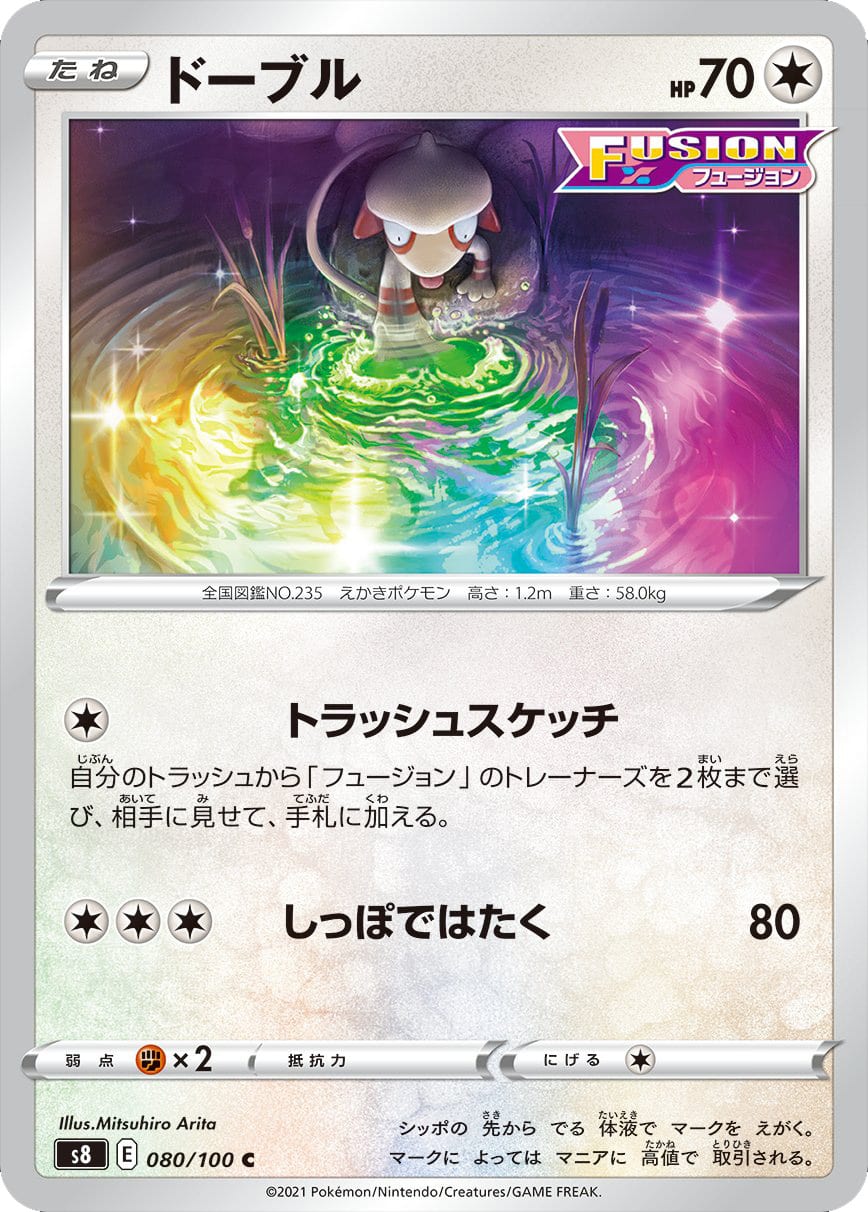 I personally love Smeargle as a Pokemon and would love this Pokemon to be playable! Let’s check it out!
Translation:
Smeargle
Basic Pokemon (Fusion)
Colorless Type - 70 HP
Trash Sketch
Choose up to 2 Fusion Trainer cards from your discard pile, show them to your opponent, and put them into your hand.
Tail Whap 80
Upon first glance, this might look like just another Pokemon in the set, but in reality, it has a great recycling type of attack! Trash Sketch can gather back Fusion Trainer cards and that is easier a big deal or a complete miss - we can only find out once more Fusion Trainer cards are released. Let’s look towards a hypothetical world where there are Fusion Trainer cards that can discard your opponent's Energy or the top cards of their deck - this could be clutched in any control deck. Alternatively, if there are powerful recovery cards printed with a Fusion stamp, this could gather those cards back too! Don’t forget that Mew VMAX can copy this attack too if the 70 HP is too measly for you. 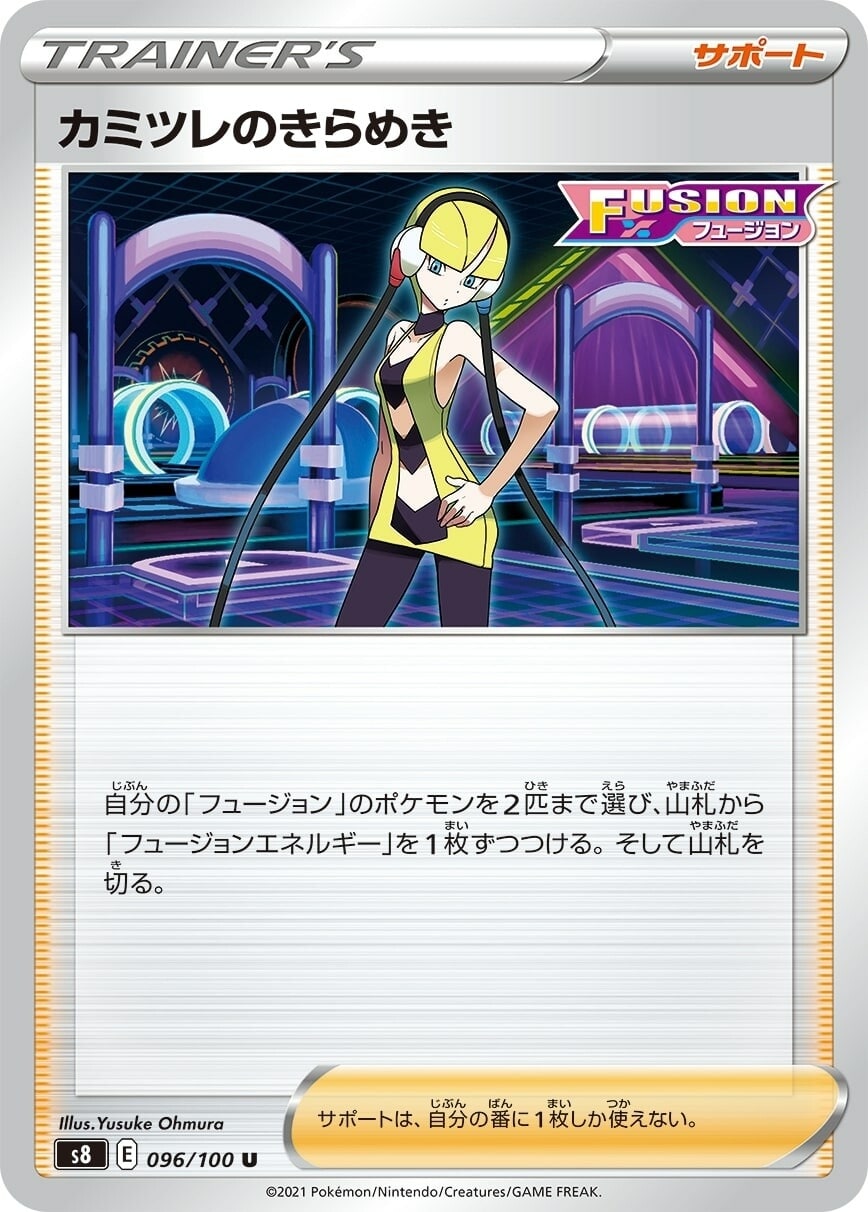 I know everyone doesn’t love new Trainer cards, but they often shape the game up! Let’s see what this one can do!
Translation:
Elesa’s Sparkle
Supporter (Fusion)
Choose up to 2 of your Fusion Pokemon in play. For each Pokemon you chose, search your deck for a Fusion Energy and attach it to that Pokemon. Then, shuffle your deck.
It doesn’t matter what Energy it is, Energy acceleration is totally a viable strategy all of the time! Having a Supporter based option, similar to Welder (Unbroken Bonds) and Melony (Chilling Reign), tells me that this concept will be the best! I know it doesn’t draw cards, but who says you can’t pair this with Genesect V to draw more cards? I’m beyond shocked that this card allows you to search for two Energy, both Energy function as a freebie Rainbow Energy (Celestial Storm) for Fusion Pokemon, and you get to grab them from your deck! This card will definitely be an asset to any deck running Fusion Pokemon and I’m positive it will be in a handful of winning combos!

Well, that's some Fusion Pokemon cards released so far! I’m hyped to see what other cool cards will make their way into this upcoming set and shake up our PTCGO metagame! I personally think the game is headed in such a cool direction with all of these different “styles” of cards and it reminds me of the great previous formats that many players cherish! It's totally an exciting time to play PTCGO / Pokemon TCG so make sure you make the best of it by picking up some awesome code cards. You can always use code “zlesage5” to save 5% on your next order OF PTCGO codes from the PTCGO Store. Thanks for reading and have a great day!

Zach Lesage is a contributing writer for PTCGO Store. As a Toronto local, he has been playing the Pokemon Trading Card Game since 2005 and creates Pokemon content as his full time career. Under the moniker of theloneblown, he creates YouTube content, streams on Twitch, and provides hot takes on his Twitter. With multiple prestigious accomplishments in the game, such as the 2020 Players Cup 2 Champion and the 2020 Oceania International Championships Finalist, he has proven his success in the game. Outside of the game, he travels the world, enjoys the culture of designer streetwear, and is a professionally trained chef. You can catch him at most Pokemon events and follow him on Twitter @ZachLesagePTCG.
SHARE THIS POST
Previous Post
Next Post