Written by Pokemon TCG trainer on 2/26/2021 at category
Hello PTCGO Store trainers! When I wrote my previous article, “Battle Cry”, I had initially covered some of the new cards releasing in Pokemon’s newest expansion. Here is an excerpt form the previous article:
“Today is going to be a bit of a different article, as I want to go over some of the cards coming out in the next Pokemon set, Single Strike/Rapid Strike. This expansion is very exciting because Pokemon is releasing a new in-game mechanic that supports Single Strike/Rapid Strike Pokemon; this mechanic is eerily similar to Team Aqua/Team Magma Pokemon mixed in with VMAX evolutions. The set is going to shake up the game and point the power creep in the right direction.”
I couldn’t get enough of this set as I have since realized that more Pokemon and cards have synergy than I initially thought. I wanted to explore more into the depths of some cards that got released, and talk about some speculated top tier contenders within the new format that will soon be upon us. Let’s talk about some more of my favourite new cards from Single Strike/Rapid Strike!

You can only play this card if it’s the last card in your hand. Search your deck for a Single Strike Pokemon and put it onto your Bench. Then, draw 5 cards. You may play only 1 Supportercard during your turn (before your attack).
Remember Archie’s Ace in the Hole and Maxie’s Hidden Ball Trick? This is basically another carbon copy of those cards. There are a few current circumstances that make this card different though – we are in a format where there is far less options to thin your hand out. While I’m confident that players will make this card work, I’m worried that it won’t be consistent enough to work all the time (for the time being). Previously, we had access to Battle Compressor, Ultra Ball, and Acro Bike when Archie’s/Maxie’s was a thing. Now, we have cards like Judge Whistle, Quick Ball, Duskull, and a few others. Honestly, as I’m writing this, perhaps it’s even easier than I thought in Standard to utilize this card? With Duskull in format, you can just chuck any 3 cards from your hand and whip a Stage 2 Single Strike Pokemon into play. This card’s potential is really only limited by how many good Single Strike Pokemon are printed. On a side note, this is a card I could see potentially being banned from competitive play due to how broken it could be with certain combos; TPCi was very intelligent to print this card for Single Strike Pokemon exclusively, otherwise it could’ve been a beast in Expanded. Speaking of expanding…

You can only play this card if it’s the only card in your hand. Put a Rapid Strike Pokemon from your discard pile onto your Bench. Then, draw 5 cards. You may play only 1 Supporter card during your turn (before your attack).
This is a similar card that they printed in an effort to include Rapid Strike Pokemon into this Archie’s/Maxie’s engine. This card is slightly different because it puts the Pokemon directly from your Discard Pile onto your bench. In terms of consistently being able to pull this combo off, it’s slightly harder than Mustard’s Single Strike Stance, however it’s very hand for being able to consistently recycle Pokemon from your discard. The Single Strike Stance card is more consistent because it pulls it out of your deck, however the amount of times you can pull this off is finite because of how many copies you can play of said card. Both cards will be format defining in time, I assure you!

Pokemon Tool: Attach a Pokemon Tool to 1 of your Pokemon that doesn’t already have a Pokemon Tool attached to it.
The Single Strike Pokemon this card is attached to can use the attack on this card. (You still need the necessary Energy to use this attack.) [F] Fury: 10+ damage. This attack does 10 more damage for each damage counter on this Pokémon. You may play any number of Item cards during your turn (before your attack).
I think this card is phenomenal for Single Strike Pokemon, especially considering that most SS Pokemon have high-energy attack costs. Raging Scroll does a good job of allowing SS Pokemon to attack for a single Energy, which can sometimes serve as a surprise to the opponent. Considering that Urshifu VMAX SS has 330HP, if you have 320 damage on this Pokemon and use Single Strike Scroll: Raging Scroll’s attack, Fury, you can hit for 330 damage onto the defending Pokemon! That’s enough damage to OHKO an opposing Urshifu VMAX for only a single energy. Holy. Cow. This card really could be a game changer depending on what other SS Pokemon are printed. It also has synergy with Houndoom, who attaches Single Strike Energies (while putting damage counters on the target you attack the energy to). With a couple Single Strike Energy, you can fuel the Fury attack and do even more damage.

Pokemon Tool: Attach a Pokemon Tool to 1 of your Pokemon that doesn’t already have a Pokemon Tool attached to it.
The Rapid Strike Pokemon this card is attached to can use the attack on this card. (You still need the necessary Energy to use this attack. [F][C][C] Whirlpool Dream: This attack does 30 damage to each of your opponent’s Pokemon. You may play any number of Item cards during your turn (before your attack).
I’m unsure of the strength this card is capable of posing. Being real with you here, I expect this card to not be that strong unless a strong basic deck such as Mad Party becomes viable, where two attacks from a Whirlpool Scroll will wipe the opponent’s field. My thoughts are that this card will be binder fodder, but it also synergizes with Rapid Strike Urshifu VMAX’s second attack, which snipes two Pokemon for 120. Overall this card is kind of weak, and doesn’t bring too much to the Urshifu RS deck that it didn’t already have.

Once during their turn, each player may discard a Single Strike card from their hand and draw 2 cards. This Stadium stays in play when you play it. Discard it if another Stadium comes into play. If a Stadium with the same name is in play, you can’t play this card.
Tower of Darkness is earily similar to Scorched Earth, a Stadium card that took off after a long time from being released. Being able to draw two cards is very strong, however many Pokemon lists are currently trending towards playing lesser counts of Pokemon and higher counts of Trainers/Supporters/Stadiums etc. It will often be one-sided in terms of just supporting you, unless the opponent is also playing a SS deck. I love non-Pokemon draw cards as they stick in play after the opponent plays a Reset Stamp/Marnie, and can help you draw out of rough disruptive scenarios. This is a card that could take off which a little bit of deckbuilding prowess, and a lot of SS Pokemon!

The Retreat Cost of each Rapid Strike Pokemon in play is [C][C] less. This Stadium stays in play when you play it. Discard it if another Stadium comes into play. If a Stadium with the same name is in play, you can’t play this card.
Tower of Waters is a relatively simple card that has immediate synergy with Urshifu VMAX RS. Being able to give RS Pokemon a lesser retreat cost is massive, and will help Urshifu VMAX RS an easier time with hitting that damage increase with Gale Thrust. Perhaps there are other Pokemon that will have synergy with having lesser retreat? Perhaps in future sets they will release more Rapid Strike Pokemon that will utilize the Active Position, similar to Jirachi TEU or Smeargle UND. Regardless, this is a useful tool that will most likely see play with these phenomenal new Pokemon! 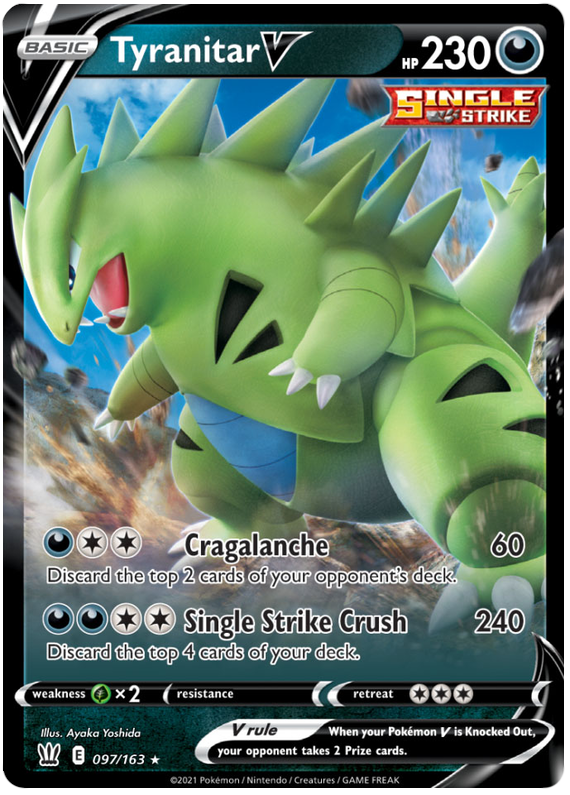 Tyranitar V SS is arguably the strongest Dark-type attacker at our disposal right now! Being able to synergize with the SS Energy Card, Single Strike Crush can hit for upwards of 280 damage, which can OHKO pretty much every relevant Tag Team in the format. It does come at the cost of discarding the top four cards of your deck, but this is a slight price to pay for taking up to three Prize Cards in a single turn! Cragalanche is also a very interesting option in order to deck out your opponent – sometimes when you’re in a pinch, the best thing you can do is discard your opponent’s resources; Tyranitar V does just that, and does it all for only 3 energy! 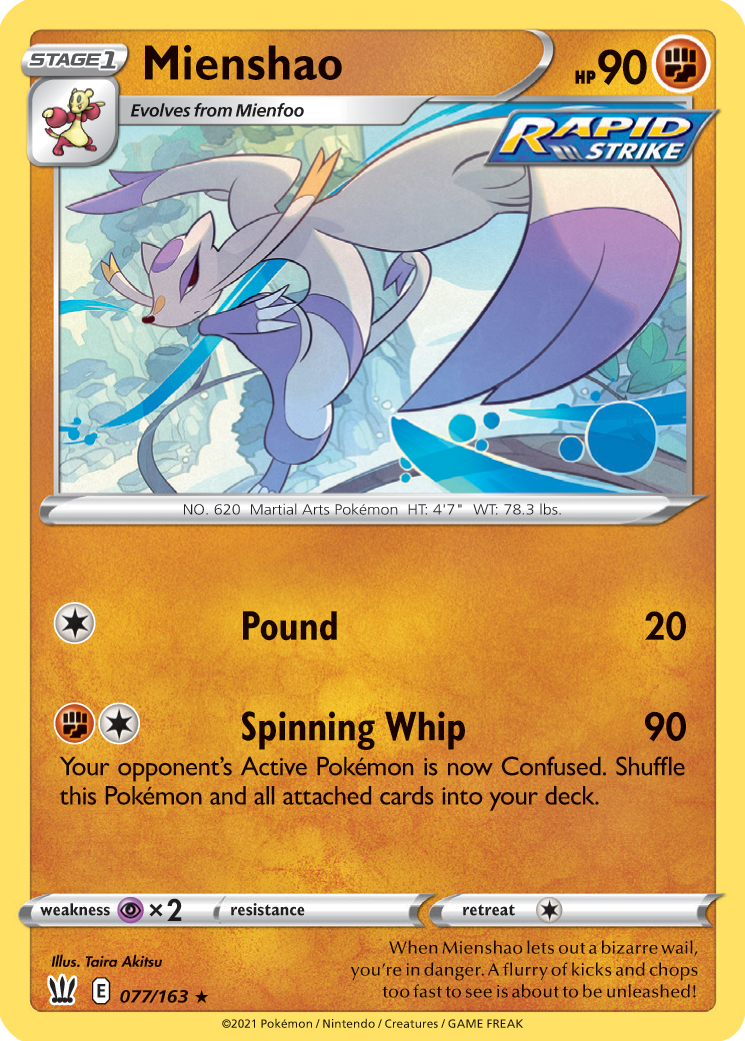 Mienshao is the last card on this list, and for good reason: Spinning Whip is a fantastic attack! Mienshao has always been known for hitting and running (much like Donphan), and this line of strategy opens up for many tactical inclusions. I’m sure there are interesting walls you can switch into, such as Goomy or perhaps Glarian Cursola. There’s a Greedent out that has a very similar concept to this Mienshao, but the typing on the card is not nearly as good. Fighting-type Pokemon are naturally stronger than Colourless! In order to effortlessly stream attacks fom this Pokemon, we must utilize the new RS Energy card, which will allow us to shuffle the Mienshao into the deck and find new pieces of our puzzle on the following turn. Mienshao is also searchable via Octillery RS – the two could have good synergy together.

I know in the last article I didn’t cover all of the top cards in the new expansion, however there were some cards I couldn’t pass up and just had to cover! I’m excited for the card pool to expand with more SS and RS cards, because there are a lot of good tools in this base set!
Once the set drops, you’ll have to shop for some codes on PTCGOStore.com as we have some of the most competitive prices in the market. Hit us up for instant delivery and excellent service – your satisfaction regarding our PTCGO codes is 100% guaranteed! Until next time, cheers trainers.
SHARE THIS POST
Previous Post
Next Post