Mew VMAX lives up to the hype

Written by Gabriel Smart on 11/11/2021 at category Deck Lists
Hey everyone Gabriel Smart here with another article for PTCGO Store. I hope you all are having a wonderful day, and I am excited to bring more content to you guys! Today, I am going to be going over my top Fusion Strike Deck. Fusion Strikes is the brand new set that is set to arrive this November. This set has a plethora of new cards that are going to throw this meta for a loop! Today, I am going to be going over Mew VMAX. Mew has been known to have incredibly viable cards over the years, and Mew VMAX may be the best one ever made! Let's take a deep dive into everything you need to know on Mew VMAX. If you are looking for any of these cards in this article, make sure to check out PTCGO Store. They have the best prices for PTCGO codes. Let's dive Mew VMAX! 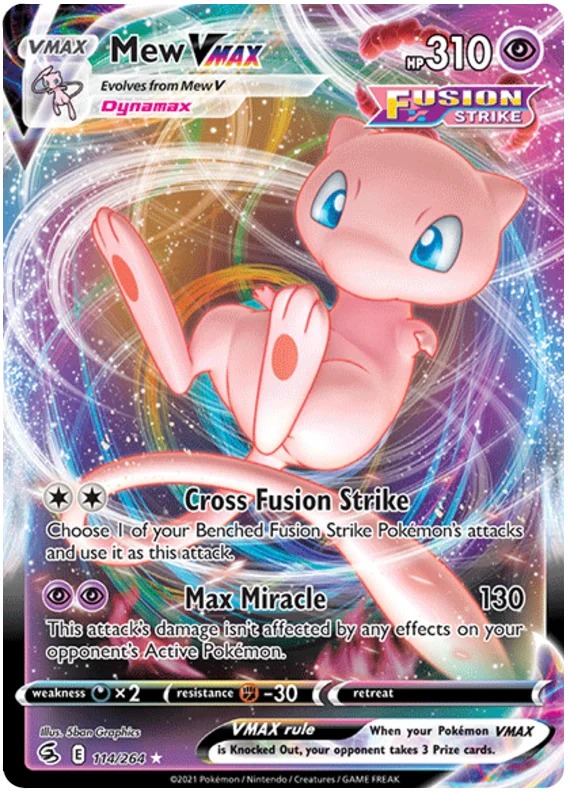 Mew VMAX is the crown jewel of this set, and it is expected to be one of the most sought-after cards in Fusion Strike. Mew VMAX’s first attack, “Cross Fusion Strike”, allows us to copy one of our bench Fusion Strike Pokemon's attacks for just two energy! Mew VMAX’s second attack deals a respectable 130 damage, and it goes through any effects on the opponent's active Pokemon. 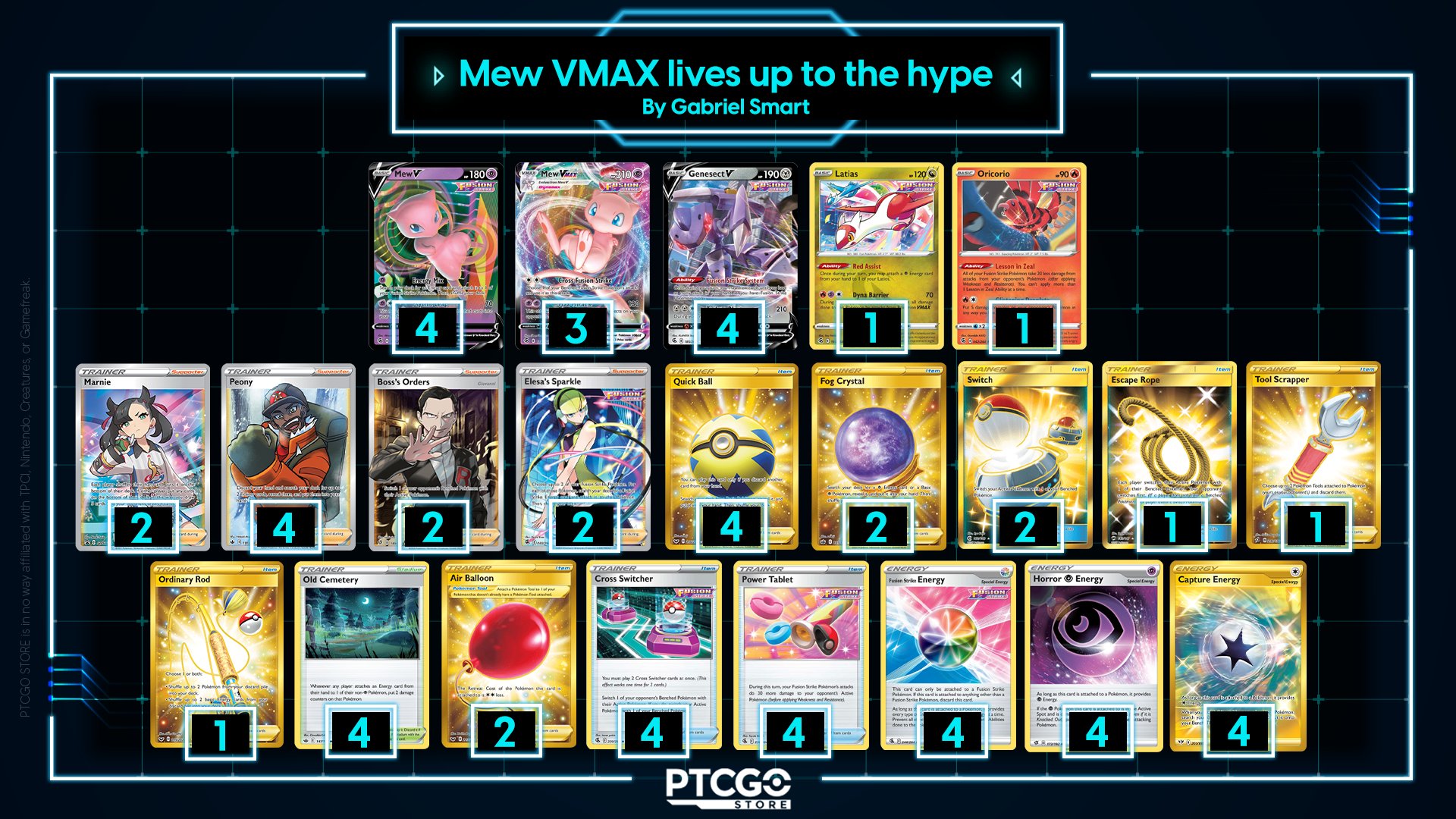 As stated above, Mew VMAX is the superstar of the Fusion Strike Set. Clocking in at 310 HP, it has 2 out of this world attacks truly take this deck to another level. The strategy of this deck is to copy Genesect V’s (Fusion Strike) Techno Blast or Latias (Fusion Strike) Dyna Barrier attack. Mew VMAX is a very similar card to the old Mew EX, as both these cards aim to copy its support Pokemon's attacks. Mew’s second attack is not to scoff at either. “Max Miracle” deals a solid 130 damage. Now, this may seem like a relatively weak attack. However, the “Max Miracles” second effect makes it go through any effects on your opponent's active Pokemon. This means Decidueye’s (Shining Fates) “Dark Forest Camo” ability will have no effect stopping Mew from taking down those pesky owls! This card is incredible, to say the least, and running three is a must. 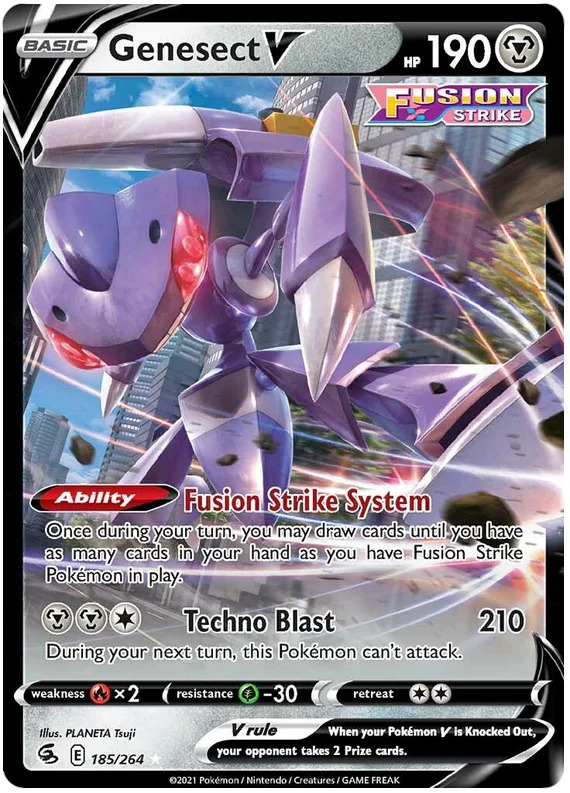 Every deck's biggest necessity to be successful is that it requires an engine to run off of. Just look at Inteleon decks, it seems these days almost every deck plays an Inteleon package to aid in the consistency of their Pokemon deck. With this being said, Mew VMAX does not require Inteleon to thrive. Genesect V is here to save the day! Genesect V’s ability Fusion Strike System reads, “Once during your turn, you may draw cards until you have as many cards in your hand as you have Fusion Strike Pokémon in play.” This ability is one of the most meta-altering effects that has graced the Pokemon TCG in quite some time. Since our Fusion Strike deck only plays Fusion Strike Pokemon, It will allow Genesect V’s “Fusion Strike System” to draw us up to 6 cards per turn. The icing on the cake is this ability can be utilized more than once a turn. The Pokemon Trading Card game over the years has seen abilities like “Trade” “Underworld Door,” “Deluge,” and more be employed to their highest potential. I genuinely believe that “Fusion Strike System” will have a similar effect on the game. Four Genesect V is a must, as it is what will make this deck run at optimal levels of awesomeness! 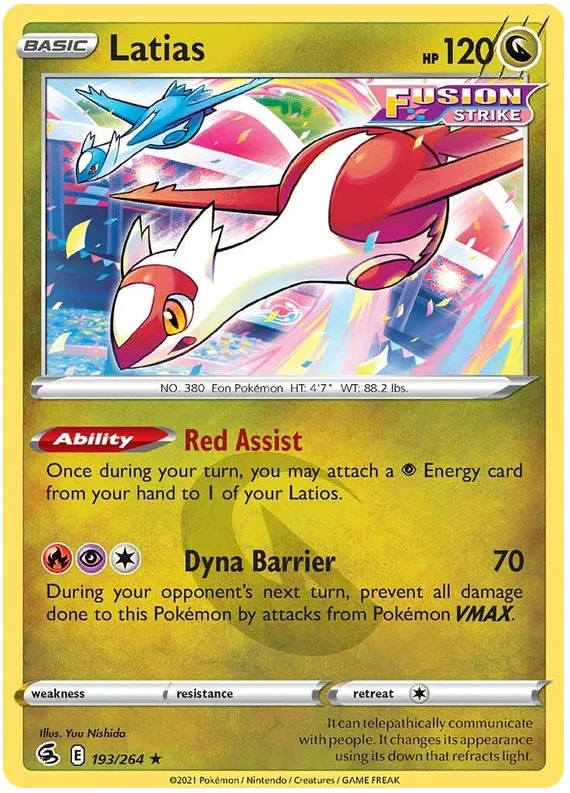 Pokemon VMAX has been dominating the format for the past year now. It seems that almost every time a deck wins a tournament, Pokemon VMAX has their fingerprints all over it. What if I told you there was a way to prevent all damage done to your Pokemon by Pokemon VMAX? Latias is just that card! Latias’s attack reads Attack 1: Dyna Barrier (70)
During your opponent's next turn, prevent all damage done to this Pokémon by attacks from Pokémon VMAX. With VMAX Pokemon ruling the format, it becomes critical for us to have a way to counter them, and Latias remedies that problem instantly! Currently. There is only one Latias slotted into the deck, but I would love to include a second copy at some point in time. 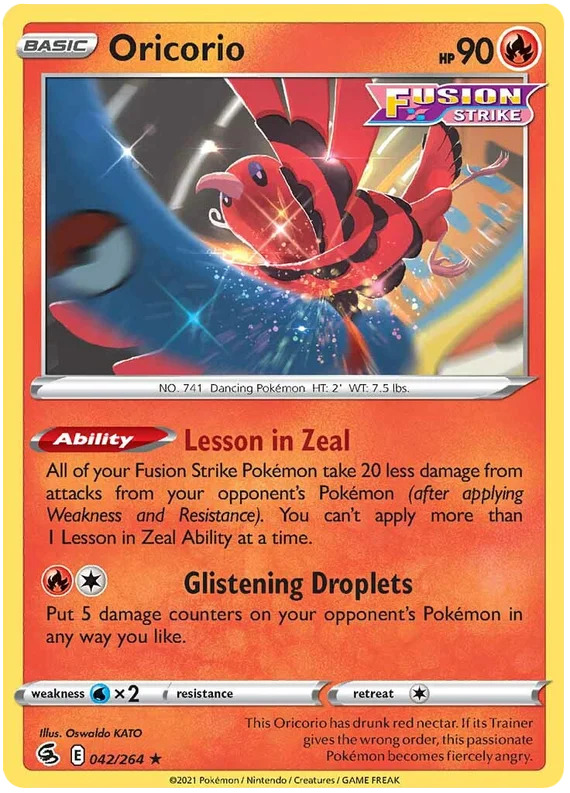 Man, this deck has a lot of Fusion Strike cards! Continuing on the Fusion Strike trend, we have our last, but certainly not least, Fusion Strike card in the deck. Oricorios ability Card Text: Ability — Lesson in Zeal
All of your Fusion Strike Pokemon takes 20 less damage from attacks from your opponent's Pokemon (after applying Weakness and Resistance). You can't apply more than 1 Lesson of Zeal ability at a time. This ability is critical in the Mew VMAX mirror match. In many circumstances, the mirror match will be decided by who can take a crucial one-hit knockout at some stage of the game. Having Oricorio will provide another obstacle for our opponents to maneuver around. Currently, I am playing only one Oricorio, as, unfortunately, this ability can only be activated once per turn. 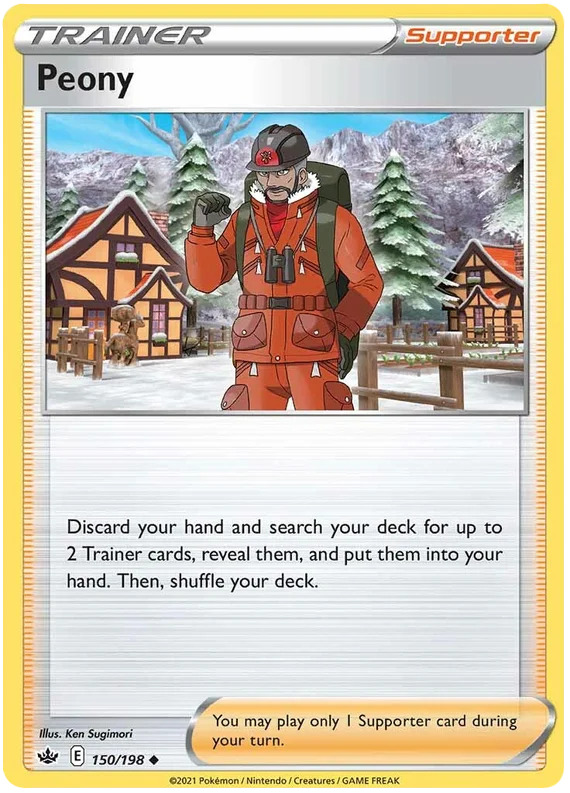 Over the past few weeks, I have worked on multiple different versions of this deck. One of the biggest problems I was having with prototypes was that I was struggling to lower my hand size to use Genesect V’s ability to its full potential. Another stumbling block that I was having was that Path to the Peak was becoming a serious issue for the deck. Due to this deck's entire consistency engine being reliant on ability, it is critical to be able to consistently find a stadium counter. Peony solves both of these issues by being able to lower our hand, and search stadiums!

Moving on, we have another incredible card from the Fusion Strike set. Elesa’s Sparkle (Fusion Strike) allows us to attach two energies to two Fusion Strike Pokemon. With Crushing Hammer, and Fan of Waves, running rampant in this meta, it is critical to have a counter to them. Without this card, Mew VMAX would fold to almost any deck with disruption. This card is a must-have, and I could even see three in the deck, depending on how big disruption decks are in the new format. 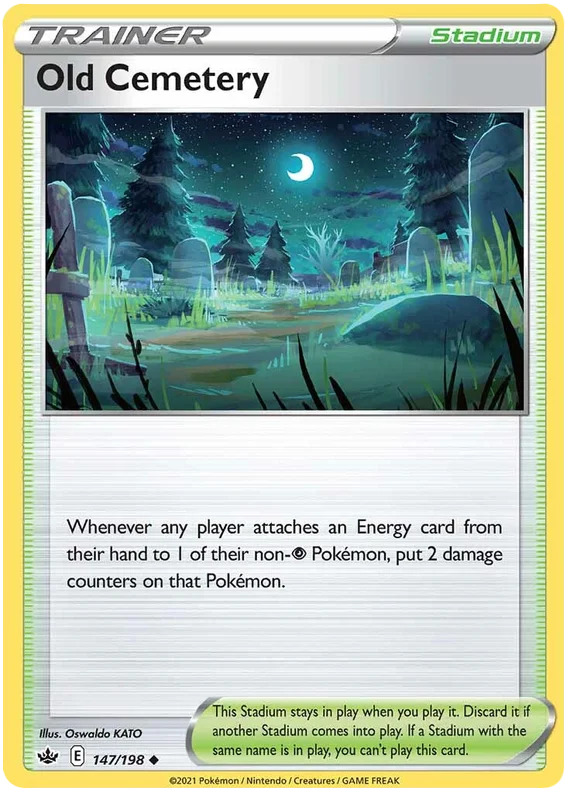 I am going to be quite honest, there are not a large plethora of stadiums that are strong right now. I have actually found myself just throwing random stadiums into pokemon online decks, simply as a counter to Path to the Peak (Chilling Reign). However, this was a deck where I found a stadium that actually had synergy! Old Cemetery Card Text: Whenever a player attaches an Energy card from their hand to 1 of their non-Psychic Pokemon, put two damage counters on that Pokemon. Since our decks entire strategy is to attack with Psychic-type Pokemon, then Old Cemetery will not deal damage to our Pokemon. In games, there will be many scenarios where Mew will be just short of taking a knockout, Old Cemetery will often be able to swing that math just enough in your favor to finish the game on top! 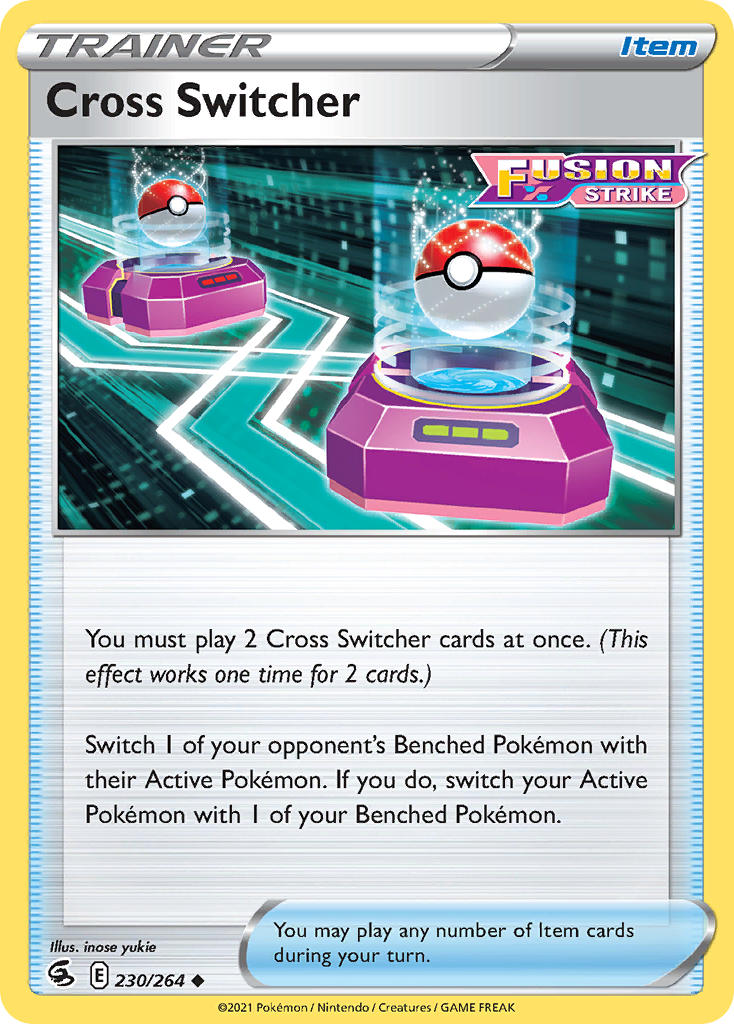 Moving forward to some new sick Fusion Strike cards, we have Cross Switcher! This card may remind everyone of Custom Catcher (Lost Thunder), but it does have a divergent text. Cross Switcher reads. You must play 2 Cross Switcher cards at once. (This effect works one time for two cards.) Switch 1 of your opponent's Benched Pokémon with their Active Pokémon. If you do, switch your Active Pokémon with 1 of your Benched Pokémon. Now you may be thinking, “An item card that has the same effect as Guzma (Burning Shadows)? That's game-changing”! In reality, this is true! I think this is one of the best cards in the entire set, and along with Peony, we will be able to search this card out of the deck whenever we want. 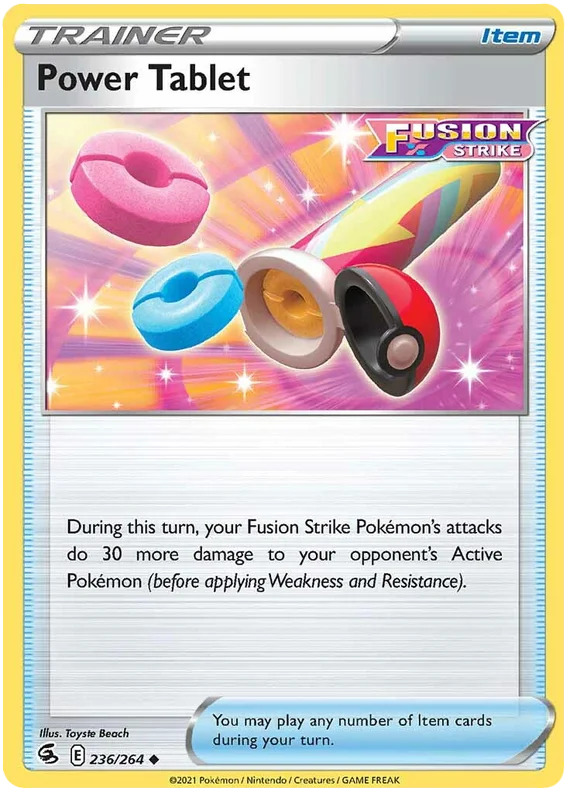 Lastly, we have a Power Tablet! Power Tablet reads During this turn, your Fusion Strike Pokémon's attacks do 30 more damage to your opponent's Active Pokémon (before applying Weakness and Resistance). One of Mew VMAX’s few and only flaws is its inability to one-shot Pokemon very easily. Now, with Power Tablet, it takes this deck to a whole other level! Mew VMAX can now max out at over 300 damage with the aid of Power Tablet, which will allow our deck to keep up with the power creep the Pokemon TCG has endured over the past several years!

I believe Mew VMAX is going to live up to the hype. This deck has too many tools not to be successful, and I cannot wait to see how much it does thrive in this meta! Thank you all for reading my newest article on PTCGO Store. I cannot wait to get my hands on all the Fusion Strike cards online and create awesome content for everyone! If you need any of these cards in this article, make sure to check out PTCGO Store for the PTCGO codes when Fusion Strike releases. They have the best price on the market and instant delivery of your PTCGL codes to your email address! I can't wait to speak with you guys again soon!