Keeping Up With The Meta

Written by Pokemon TCG trainer on 9/28/2021 at category Articles
Hello everybody! I hope you’re all holding onto your Exp. Shares, because we’re going to tackle a wealth of knowledge in this article. I’ve been peeping all of the tournament results on the Limitless platform, which has been excellent at aiding me in monitoring data. After doing some research, it’s been awesome to go over some of the most interesting plays that I’ve seen so far in this format, as well as some of the most popular plays that are seeing success. Basically, today we’re going to study the beginning of a new post-rotation format and see how things are unfolding within the online scene. It’s important to monitor the results of major tournaments when new expansions come out because then you can have a log of how a metagame has evolved and developed into what it will be in a future state. Without further ado, let’s hop into what’s doing well right now!
I booted up my Pokemon Trading Card Game Online app, loaded up some PTCGO codes, and then traded those Pokemon online codes to trade for these decks talked about within the article. I was very excited, and it honestly didn’t take that many PTCGO codes to make the decks. If you’re looking to buy some codes, we sell them here on PTCGO Store, and I highly urge you to check out our competitive pricing and swift delivery! Let’s talk about the newest decks that are being popularized within our new EVS standard format.

The Current State of Pokémon Tournaments

Pokemon tournaments have been in a very unique spot due to the COVID-19 pandemic; many tournaments are going on each week with some reaching triple digits (the tournaments that are being played each week are within the double digits at this point). When there are very large tournaments put on by Limitless (or sometimes other organizers) they can even reach the 1000 person mark. People tend to really enjoy the online circuit, however, the culture evolves much quicker online than it does in person. Online, people adapt to metagames much faster because tournaments are in abundance, whereas in real life the meta moves slower - this is most likely because tournaments are spaced out a weekend to weekend. It’s important to keep tabs on the online metagame by reviewing the metagame of each tournament with Limitless’ “metagame” tab.

Evolving Skies has just been released which has been a favorite by MANY players. This expansion has given us so many new archetypes to play with; amongst the lengthy card list, here are some new inclusions that are making big waves in the online meta game:
…and more!
This may be the most amount of dedicated archetypes that we’ve seen come out of a set in a while. I’ve been loving the diversity we’ve been seeing lately, and it’s inspired many players to come back and enjoy the game. The possibilities are endless with the newest expansion, and that doesn’t even include any of the Trainer cards from the set. Raihan alone is a card that is seeing play in many pokemon online decks; it is popularized because it can give energy acceleration to really any deck (regardless of type). Some of the new cards printed will go into older decks, while some cards are really just becoming their own archetype. We’re going to go over some winning lists from some of the first major tournaments since this expansion has dropped, and talk about why they won/why they were played. Here we go! 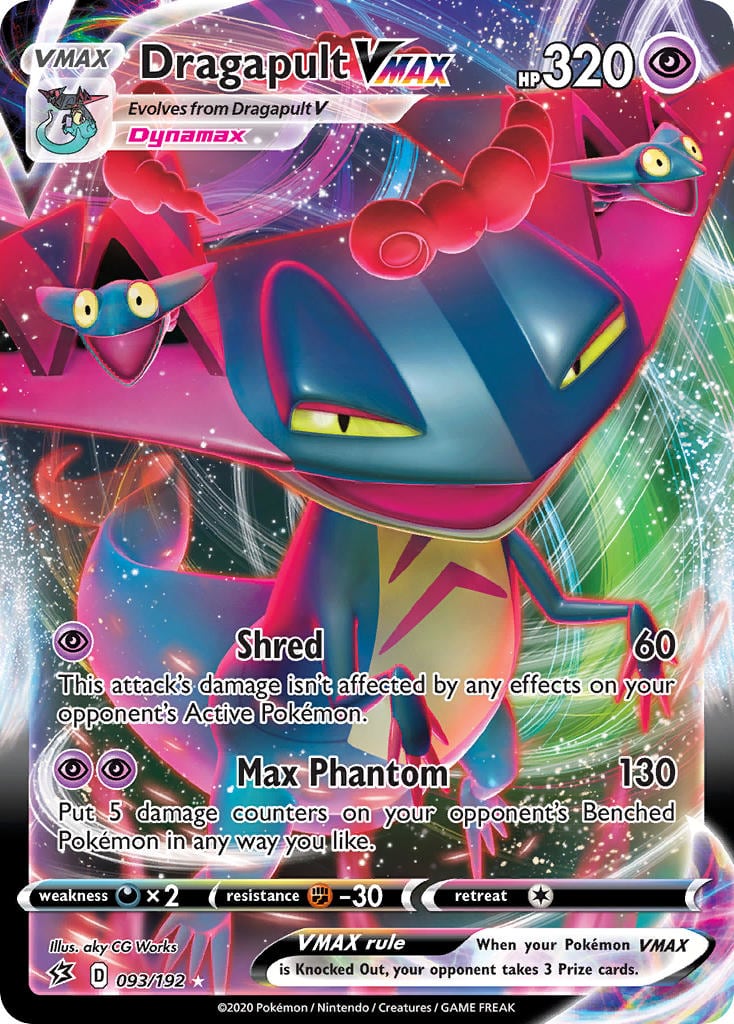 4 Horror Psychic Energy RCL 172
3 Psychic Energy 5
Total Cards - 60
Before this tournament, there was a lot of speculation that Rapid Strike Urshifu VMAX was going to run the new format. This was largely due to the ever-so-popular Mew (Bench Barrier) rotating, meaning that there is no card that can prevent general bench damage. This means that a G-Max Rapid Flow can ping two Pokemon for 120 damage each (150 damage each with Passimian) without being checked.
Henry, a previous World Champion, brought this Dragapult deck to wail on those Urshifu decks by hitting hard for weakness and negating damage with a handy resistance. Henry however knew this wasn’t enough to win a large tournament because there would be copious amounts of the other BDIF, Shadow Rider Calyrex. To accompany his main attacker, he paired Dragapult up with the Inteleon engine and a bunch of Path to the Peak to shut down Underworld Door. What a match made in heaven! This deck went on to win the whole tournament and take out a Shadow Rider Calyrex deck in the finals.
Some key takeaways from this tournament include the existence of Dragapult as a deck, the popularization of Path to the Peak in Standard format, Zamazenta’s strength within Standard format, Suicune’s potential. 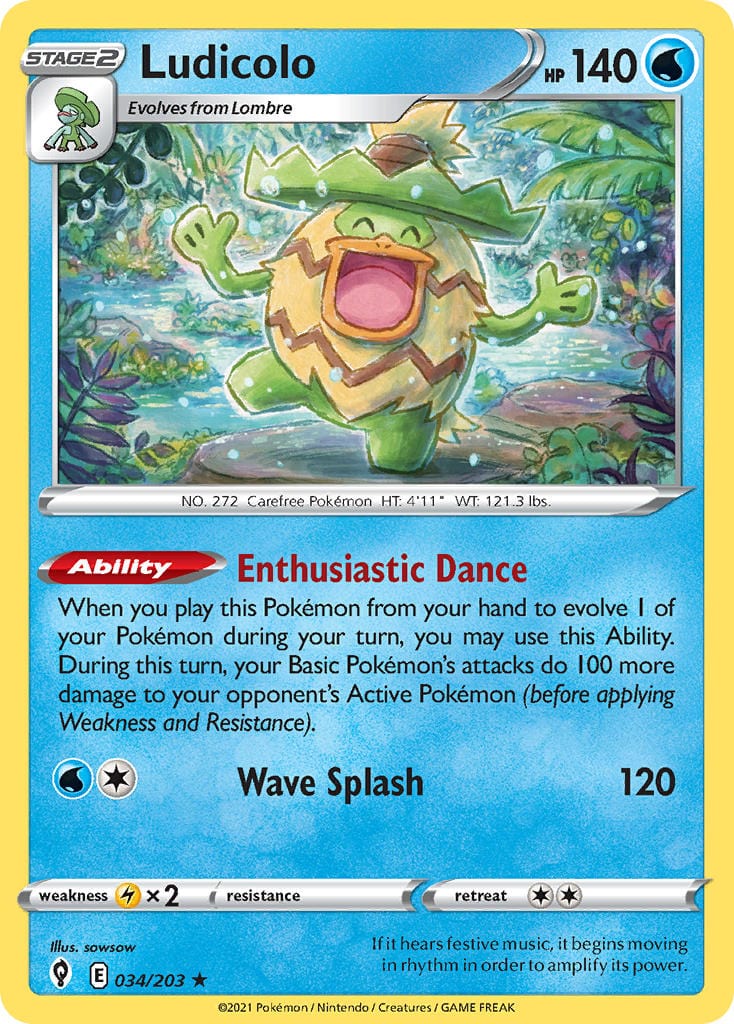 6 Water Energy 3
4 Capture Energy RCL 171
Total Cards - 60
Gabriel is one of the most well-seasoned players from Latin America and has brought some spice to the table for this tournament. He was able to win with his trusted Suicune/Ludicolo deck that focuses on multiple Stage 2s. With the Fleet Foot ability and consistency provided by Drizzile, it seemed to be just enough to be able to get Ludicolos online and land some big attacks - some even being enough to OHKO a VMAX. Aided by Melony as well as Raihan, you could realistically power up back-to-back attackers within a single turn of each other.
This deck is still at the top and was designed to be a low-maintenance deck that could swing the tempo of games while also having a consistency option while Path to the Peak was in play.
Some key takeaways from this tournament include: Suicune’s newest skeleton list was born, Umbreon proved it has what it takes to survive in standard, Ice Rider made a return, Dragapult’s viability became worse as a result of less Urshifu in format. 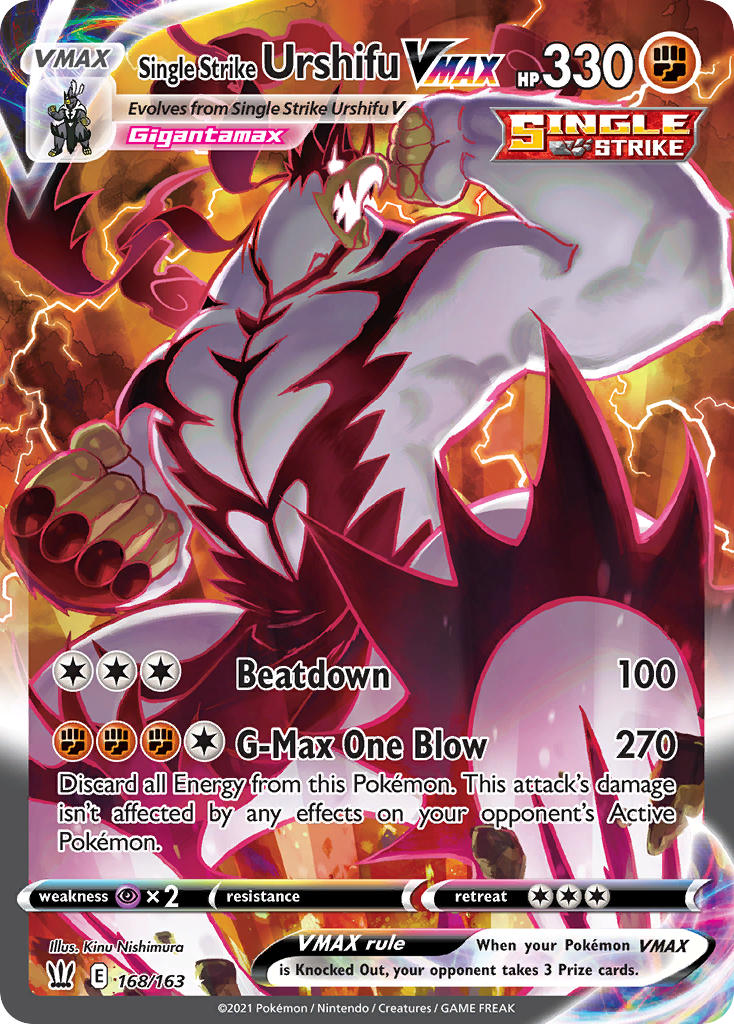 4 Capture Energy RCL 171
4 Single Strike Energy BST 141
2 Fighting Energy 6
Total Cards - 60
Stephane himself is an International Champion and oftentimes slated as one of the best players in Europe, let alone the entire game. It’s been interesting to see several big names take down these online tournaments with relative ease, and it gives hope to me that the game is more skilled than we originally think. That being said, I think a lot of skill lies within deck choice and metagame analysis, and that’s just what Stephane did with his deck choice. He opted to play a more toolbox approach to Single Strike by including Dark and Fighting attackers in his list, as well as a way to hit through a Zamazenta V.
This deck was designed to prey on VMAX decks by being able to OHKO them and capitalize on popular weaknesses. By analyzing the metagame perfectly, Stephane was able to build a deck that could have very positive prize trades.
Some key takeaways from this event include the popularization (and simultaneously the downfall) of Zacian V/Zamazenta, the emergence of Single Strike with Urshifu, Jolteon began to get more popularized.

Some early impressions from this metagame clearly show how fast things are shifting from tournament to tournament. It’s not shocking to me to see various top players evolving the metagame and changing decks to exploit specific weaknesses. It’s a skill to get that good at reading what others will play, but as the metagame solidifies it will get easier and easier. As we speak, there is a Sylveon VMAX deck that is undefeated at a 350+ person event right now, and I wouldn’t be surprised if that became a top deck for a while. Needless to say, any deck can really win right now as long as it meets the following criteria:
If you meet all three of these, you could potentially win a major tournament. Ultimately, you do need a little bit of luck to swing your way, but overall these three factors may weigh the heaviest above all.

This metagame has become one of the most diverse ones that we’ve had in a while, and I couldn’t be happier with how it’s turning out. Although there are some inherent weaknesses with the current state of the TCG, there are so many things to be happy about right now. Likewise, it shows that the game can always have new life breathed into it, and continues to be innovated by the company. Until next time, have fun!
If you’re looking for codes for Pokemon TCG Live play, feel free to pick some up in our shop. We offer Pokemon codes at a very competitive price and ensure instant delivery of your PTCGL codes directly to your email. Thank you for reading this article today on the PTCGO store! Have a great day.
SHARE THIS POST
Previous Post
Next Post 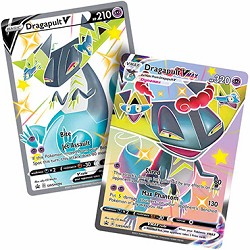 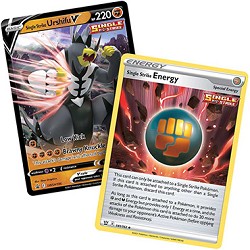