Written by Gabriel Smart on 8/24/2021 at category Deck Lists
Hey everyone my name is Gabriel Smart. I am beyond excited to begin writing for PTCGO Store! I hope everyone is having a wonderful time browsing this amazing website, and I'm happy you have stumbled upon my writing! In the next coming months, we are going to be experiencing an immense rotation that is going to completely alter this meta! Gone will be cards like Reset Stamp (Unified Minds), Arceus & Dialga & Palkia-GX (Cosmic Eclipse), Mewtwo & Mew-GX (Unified Minds), Dedenne-GX (Unbroken Bonds), Pikachu & Zekrom-GX (Team Up) and so much more! How we play the game, and how we deck build will be drastically altered as well! With that being said, it's time we take our vision to the horizon upon us! Let's dive into some post-rotation decks! 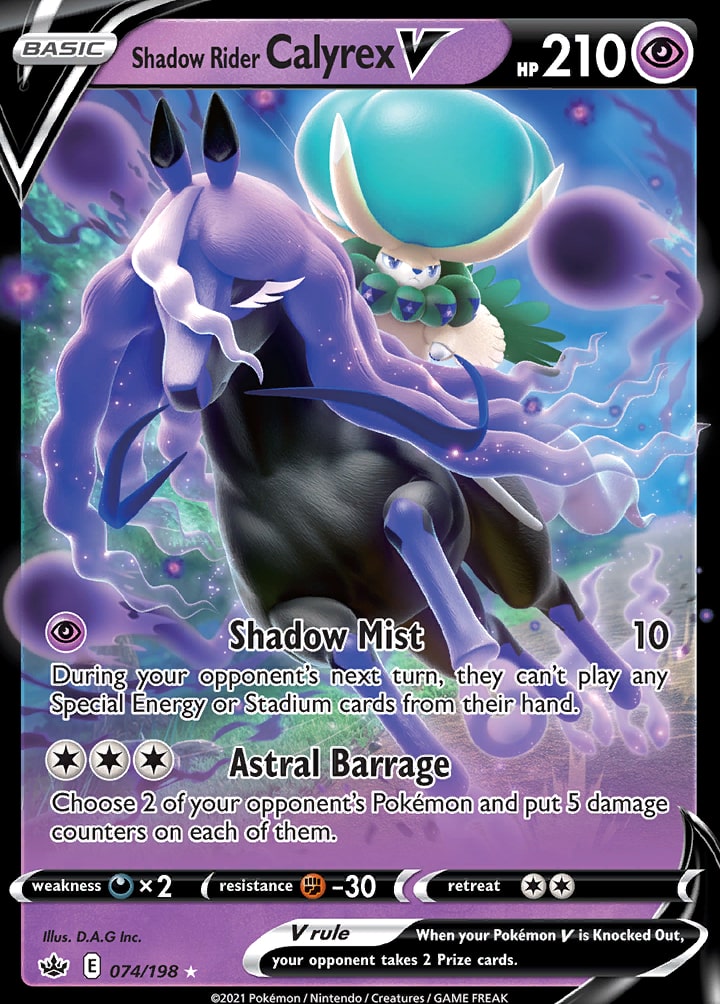 Shadow Rider Calyrex VMAX (Chilling Reign) has been the crown jewel of the current Pokemon metagame for the past two months. Its ability “Underworld Door”, its attack “Max Geist”, and its partnership with Gengar and Mimikyu GX (Team Up) has allowed it to patrol the top tables and dominate tournament after tournament for the past month. With that being said, rotation is expected to change the complexion of this deck substantially. Gone will be cards like Gengar & Mimikyu and Marshadow (Unbroken Bonds), and we will be tasked with the job of injecting new cards into the deck. Let's take a look at the list I currently have built:

With 320 HP, huge damage output, and incredible ability, this Pokemon is truly one of the most meta warping cards we have had in quite some time. Its ability Underworld Door, paired up with its damage output potential, has led to this card being able to win multiple major events recently. Although this card is exceptionally strong on its own, with the loss of Gengar & Mimikyu and Trevenant & Dusknoir (Sword and Shield ), it loses some of the versatility that it needs to make up elsewhere in the list. 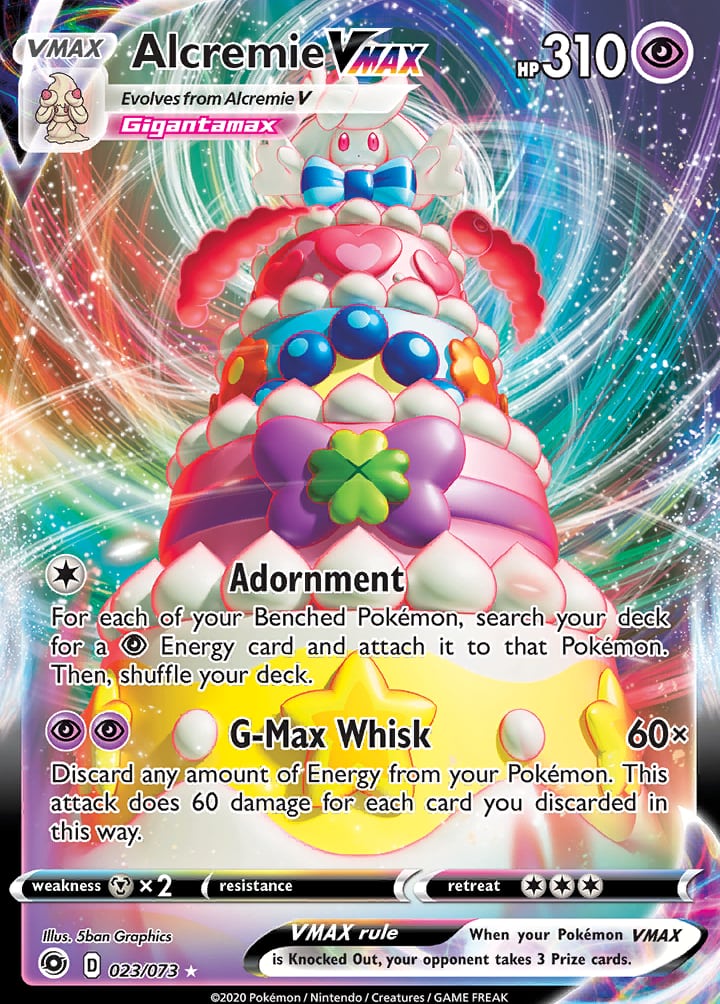 Alcremie VMAX (Champions Path) coming in at 310 HP has a ton of upside going forward in this Pokemon online deck! With the loss of a plethora of key cards, this deck needs to compensate for those losses. The ability to swing the mirror matchup heavily into your favor and the chance to beat dark decks has given this deck enough reason to focus more on an Alcremie based variant of the deck going forward. Alcremies' attack G-MAX Whisk is able to knock out any Pokemon in the game, and with Pokemons HP continuing to increase, this Pokemon is able to pack quite a big punch to take down any VMAX in the game!

In this current meta, Shadow Rider decklists have struggled to find space for this card. With so many key cards rotating from this deck, it gives us plenty of space to add other cards into the engine. Cresselia's (Chilling Reign) attack crescent glow, will serve as a replacement for Horror House going second and will be able to set up huge knockouts with Alcremie VMAX. Its second attack is no slouch either. Being able to attack for 120 can serve as a strong one prize attacker, and can aid against Decidueye based decks. Cresselia will also serve as a powerful tool in the Shadow Rider Calyrex mirror match! In the past going first was always the objective for every Shadow Rider player. Going forward though, having Cresselia in your deck, will give you the option to go first or second! Being able to Crescent Glow going second will allow you to get a massive Alcremie knockout, but going first, means that you will be able to set up before they do! This card will provide your deck with many options to work with and serves as a great one prize attacker! 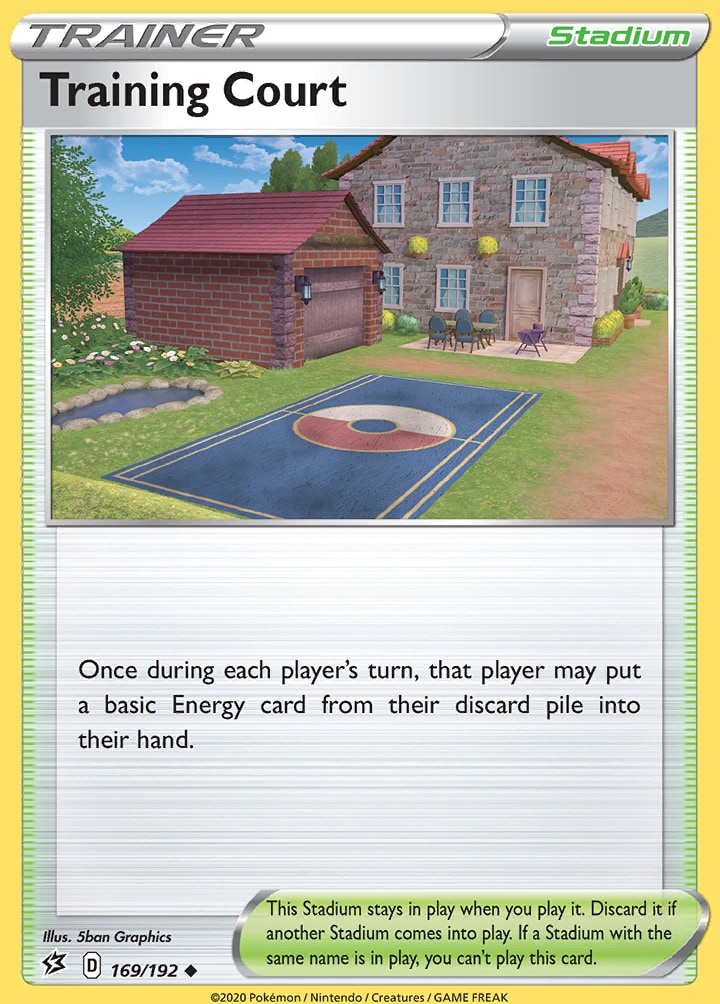 As this deck shifts to a more Alcremie based variant, it becomes critical to be able to recover energy throughout the game, to be able to continue to have an infinite damage cap with your attackers. Training Court once per turn allows you to get energy from your discard pile and put it into your hand. This will provide energy to Underworld Door, and will make it so you will be able to attack for big numbers every turn! Another important note is Path to the Peak Pokemon online decks are expected to see a huge rise in popularity going into the next format. With Chaotic Swell and Marshadow rotiation, Path to the Peaks effectiveness grows substantially so it will be crucial to be able to remove them from play consistently.

To be quite honest, I have been going back and forth on whether this card should be an energy recycler or rod. After doing some testing, I have come to the conclusion that the option to be able to recover Pokemon has been game-saving on numerous occasions. With all of the discarding that this deck plans to execute, it is important to have an option to recover Pokemon, along with energy, which Ordinary Rod provides that perfect fit.

Shadow Rider is still expected to be poised to make a huge splash going into the next format, and as long as it has tools to pair it with, it will continue to dominate the format! As new sets arrive onto the scene, and new psychic Pokemon are printed, this Pokemon online deck will only get better. I am excited to see how well this deck does in the coming format. With that being said, it's time we take a look at the king of Evolving Skies!

Evolving Skies is expected to completely shake up the meta. There are tons of great new cards coming out like Umbreon VMAX, Rayquaza VMAX, Flaaffy, Duraladon VMAX, Medicham V, and so much more! With there being so many great new cards on the horizon, there is one that steals the show, and that card is Rayquaza VMAX! Let's take a look at my list! 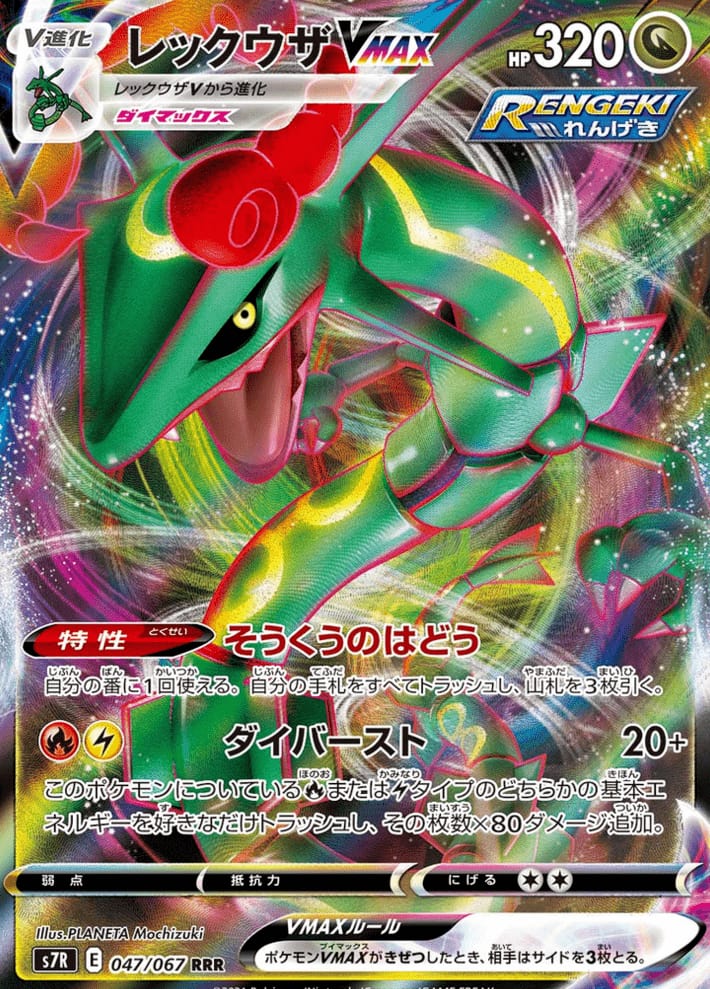 Translation:
Rayquaza VMAX – Dragon – HP320
VMAX Pokemon (Rapid Strike) – Evolves from Rayquaza V
Ability: Sky High Wave
Once during your turn, you may discard all cards from your hand. If you do, draw 3 cards.
G-Max Burst:
20+ damage. You may discard either any number of basic [R] Energy or any number of basic [L] Energy from this Pokemon. This attack does 80 more damage for each Energy discarded in this way.
When your Pokemon VMAX is Knocked Out, your opponent takes 3 Prize cards.
Clocking in at a Massive 320 HP, this Pokemon is going to be one of the toughest cards to knock out in the game! Its ability, Sky High Wave, allows you to burn aggressively through your deck to be able to achieve your strategy. Along with its strong ability, it was gifted with a pulverizing attack in G-MAX Burst! Paired up with its partner in crime Flaaffy, this deck will be able to have a near-endless damage cap and will be able to handle anything in the game! 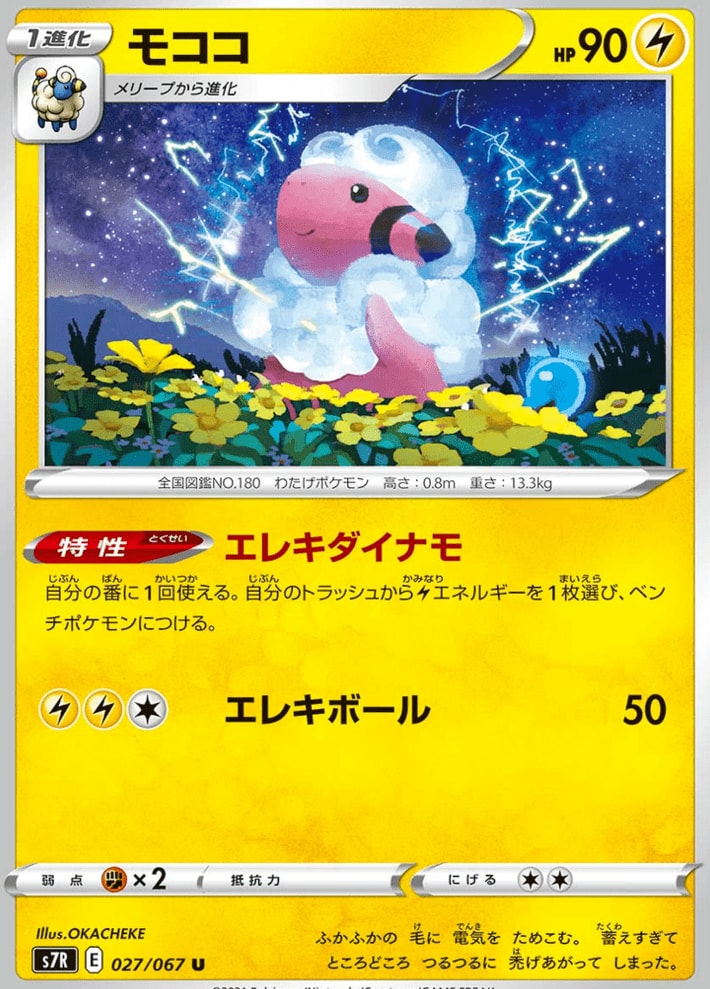 Translation:
Flaaffy – Lightning – HP90
Stage 1 – Evolves from Mareep
Ability: Dynamotor
Once during your turn, you may attach a [L] Energy card from your discard pile to 1 of your Benched Pokemon.
Electric Ball: 50 damage.
It has been quite some time since we have had a Pokemon that is able to accelerate energy from the discard. With Evolving Skies finally, on its way, the TCG has its new energy accelerator Pokemon! Flaaffy will serve as a great accelerant for Rayquaza, to guarantee that it will be able to hit monumental numbers. One of the biggest crux of decks that play these types of stage ones is consistency problems. Consistency issues will be critical to solving which makes running four Flaaffy and four Mareep a no-brainer. Consistency is always king! Now let's look at another new card in this deck! 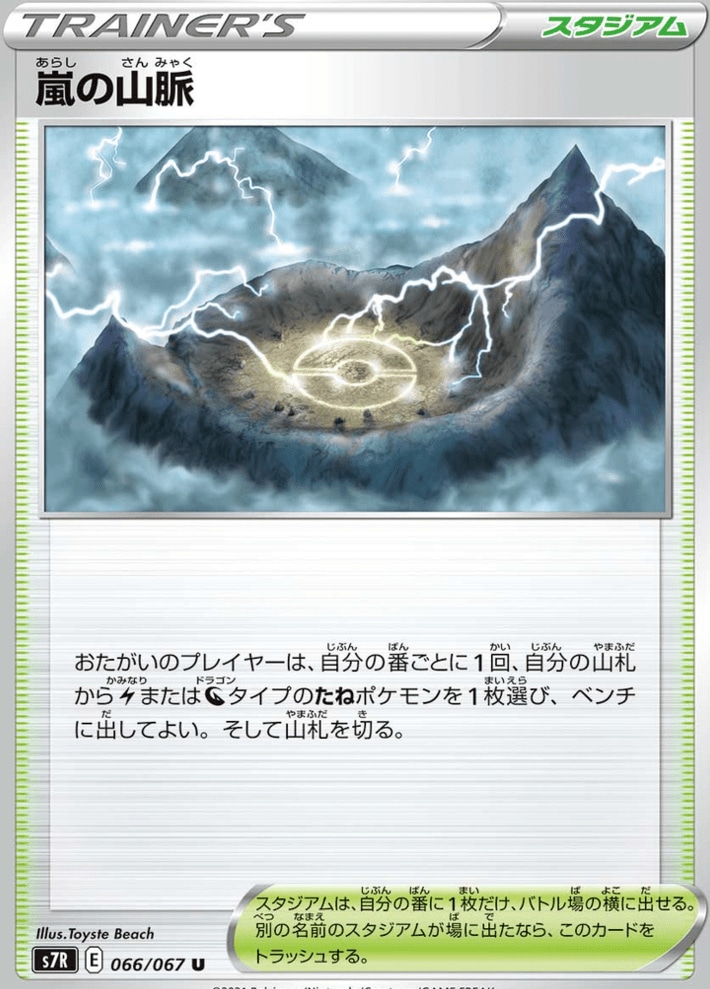 Translation
Trainer, Stadium
Once during each player’s turn, that player may search their deck for a Basic [L] or [N] Pokemon and put it to their Bench. Then, that player shuffles their deck.
This Stadium stays in play when you play it. Discard it if another Stadium comes into play. If a Stadium with the same name is in play, you can’t play this card.
Stormy Mountains is a brand new card from the most recent expansion! Over the years, stage one and two decks have often struggled with consistency, so having a stadium card that searches itself for a lighting or dragon type is going to provide a huge consistency boost for this deck! Being able to search for Rayquaza V or Mareep, will aid in making sure that you achieve your strategy every single game! 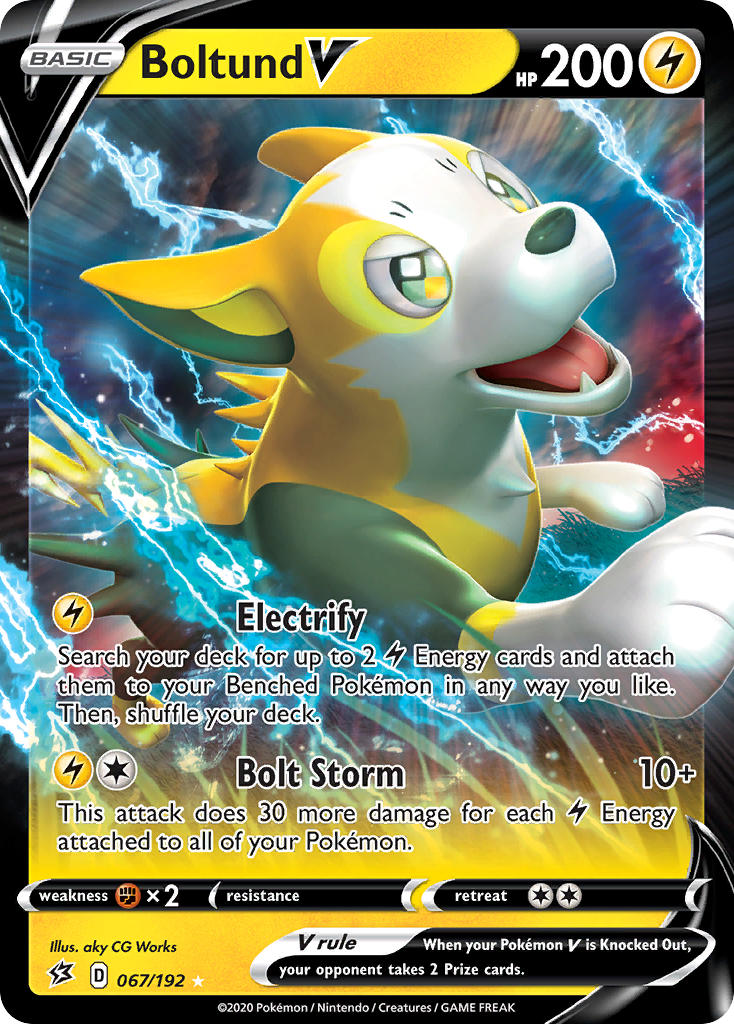 Another important card in this deck is Boltund V. Boltund has seen a generous amount of play in lighting-based Pokemon online decks this past year and this deck is no exception! Being able to electrify onto your Rayquaza’s to stream big knockout after knockout will be critical to achieving at the beginning of the game. Its first attack is not the only option that makes it so potent! Bolt Storm will serve as a serviceable enough attack to get you through lighting weak decks, as well as provide a 2 prize attacker that can still deal out some devastating damage to the opponent! 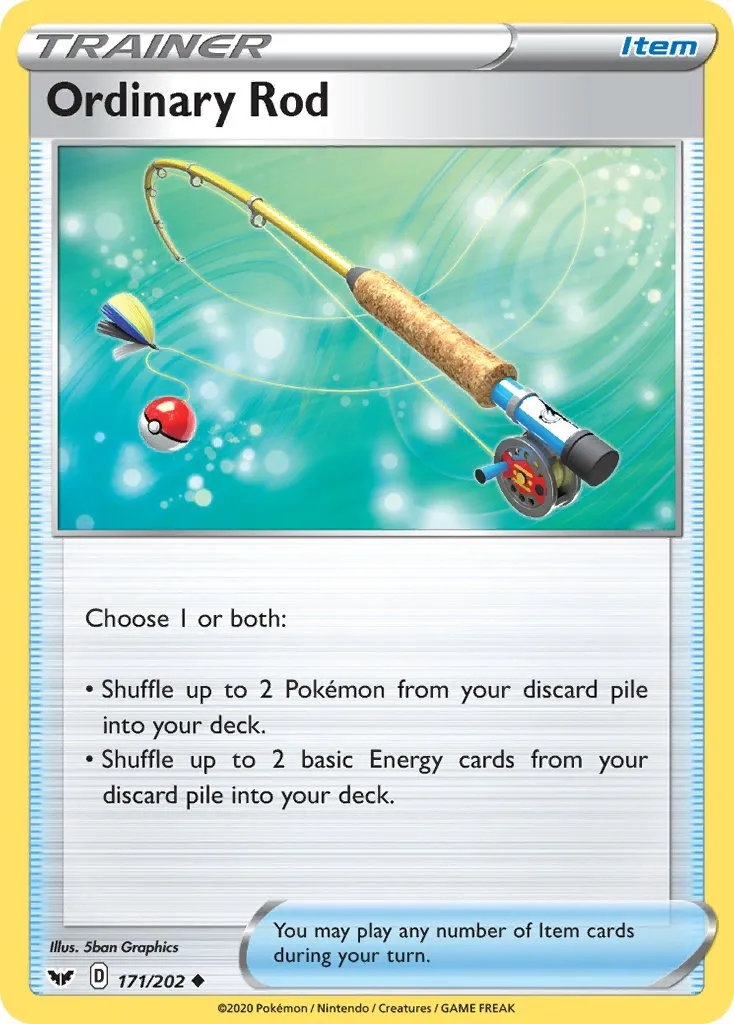 Although Rayquaza’s VMAX ability is incredible, you will fall into situations where you will discard valuable resources. With the addition of Ordinary Rod, you will be able to recover precious resources that had to be discarded. Rod will allow you to be a little more flexible with what you chose to get rid of and will allow you to more freely burn through your deck.

Shadow Rider is going to prove itself to still be one of the best Pokemon online decks after rotation. With this being said, I firmly believe that Rayquaza VMAX has limitless potential going forward regardless of some of the flaws the deck may yield. Rayquaza is too strong of a card to be held in check for long and although it may come out of the gates slow, I can confidently say the deck will find its niche in the meta. Both lists provide great starting points for the deck! I have loved writing every bit of this article and I look forward to writing more for PTCGO Store in the near future. If you are looking to buy some PTCGO codes, this store is perfect for you. They got an instant delivery of your PTCGO codes directly to your email address. Thank you everyone very much, and I hope to speak with you again soon.
SHARE THIS POST
Previous Post
Next Post

Hey Gabriel I'm wondering why you have chosen to go down the Boltund and more draw supporters route over the Kricketune and Rose route do you feel the electrify + the extra draw support is getting you set up more consistently or another reason. Do you also think that the 4 stadium line will be enough for consistent Mareep's over a higher Level Ball count?

Hey Julian! Thank you for the question! The biggest issue with this deck is consistency. I feel that having boltund gives you a more secure way of setting up, rather than relying on only rose which from testing has been really clunky and awkward at times. Both versions have their merits but I currently prefer this one. I do think that having the higher stadium count is better than higher level ball because Path to the Peak is such a huge part of the meta. I hope that answered your question!