“Dream On” - Jolteon in Standard!

Written by Pokemon TCG trainer on 12/9/2021 at category Deck Lists
Good afternoon Pokemon trainers! I’m back with yet another article for you, and this time it is about one of my favorite decks in the format, Jolteon VMAX! Jolteon VMAX has been at the top of the standard format before, however, with the release of Fusion Strike, there has been less Rapid Strike Urshifu VMAX floating around (which was Jolteon’s worst matchup). With a solid game plan against Single Strike variants as well as Mew VMAX, this deck can see a wide variety of successes! Especially when you factor in how strong of a matchup this deck has against Suicune/Ludicolo decks. The metagame seems to be shifting in a way that has answers to Mew VMAX, and Jolteon aims to capitalize on that! I think it’s mostly due to the fact that this deck plays a couple of copies of Path to the Peak. Any VMAX deck that doesn’t require Rule Box abilities to function should really be playing anywhere from 2-4 copies of Path to the Peak to combat Genesect V’s aggressiveness right now. With that being said (and my tangent being complete), let’s pop over to one of the most electrifying decks right now, Jolteon VMAX!
I booted up my Pokemon Trading Card Game Online app, loaded up some PTCGO codes, and then traded those Pokemon online codes to trade for this deck. I was very excited, and it honestly didn’t take that many PTCGO codes to make the deck. If you’re looking to buy some codes, we sell them here on PTCGO Store, and I highly urge you to check out our competitive pricing and swift delivery! Let’s talk about the newest way to play Jolteon VMAX! 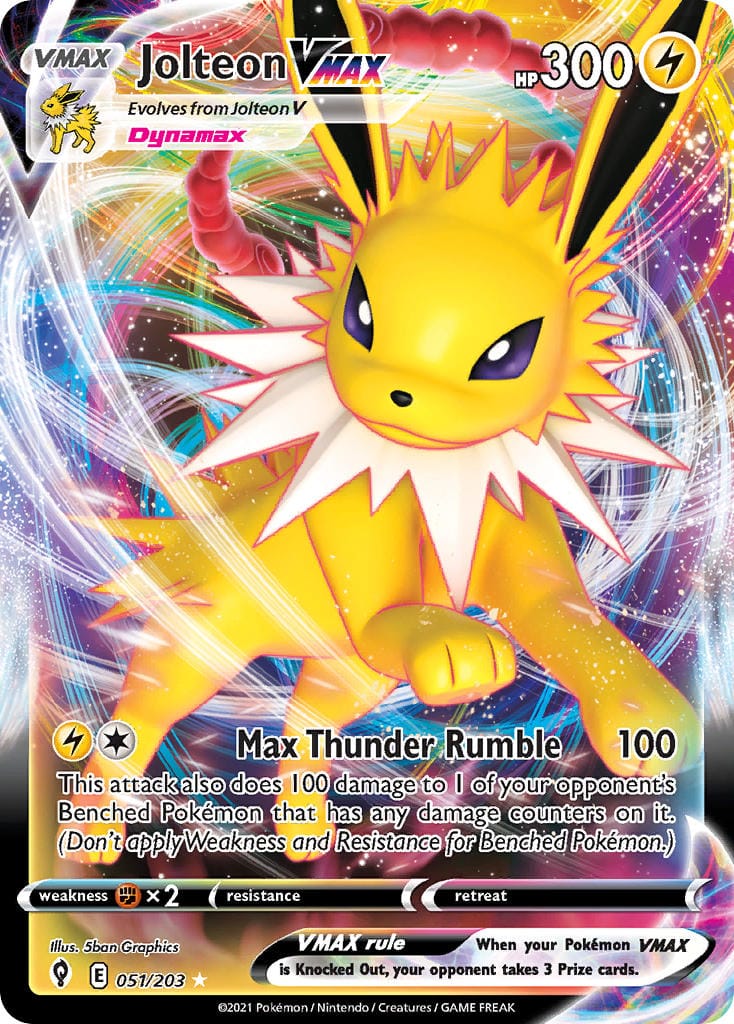 The main strategy for this deck is very similar to what Rapid Strike Urshifu decks aim to do: take all six Prize Cards by spreading damage into different Pokémon. Jolteon is very efficient at putting damage into the opponent’s board in the correct places. Between Zigzagoon, Inteleon, and Jolteon VMAX, damage piles up quickly! The usual best route to take is to KO one VMAX on the opponent’s side, and then take three KOs onto smaller Pokémon like Sobble or perhaps a Houndoor. You can take the alternate route and KO a VMAX, a V, and a single Prizer, or maybe even KOing two VMAXs. You will generally win the game within the first four turns of the game if you place your damage correctly (and if your opponent plays no healing cards).
One additional benefit to this deck is how quickly it can shut down engines. Similar to how Dragapult can make quick work of KOing Sobble, Jolteon can do it just the same! If you KO your opponent’s options on their field, and are able to simultaneously damage their main attacker, you’re going to be in a great position. Couple that with playing some copies of Path to the Peak, your opponent won’t be able to use their Drizziles or their Crobat Vs to setup. Most of the time this will render the opponent’s setup as “dead”. 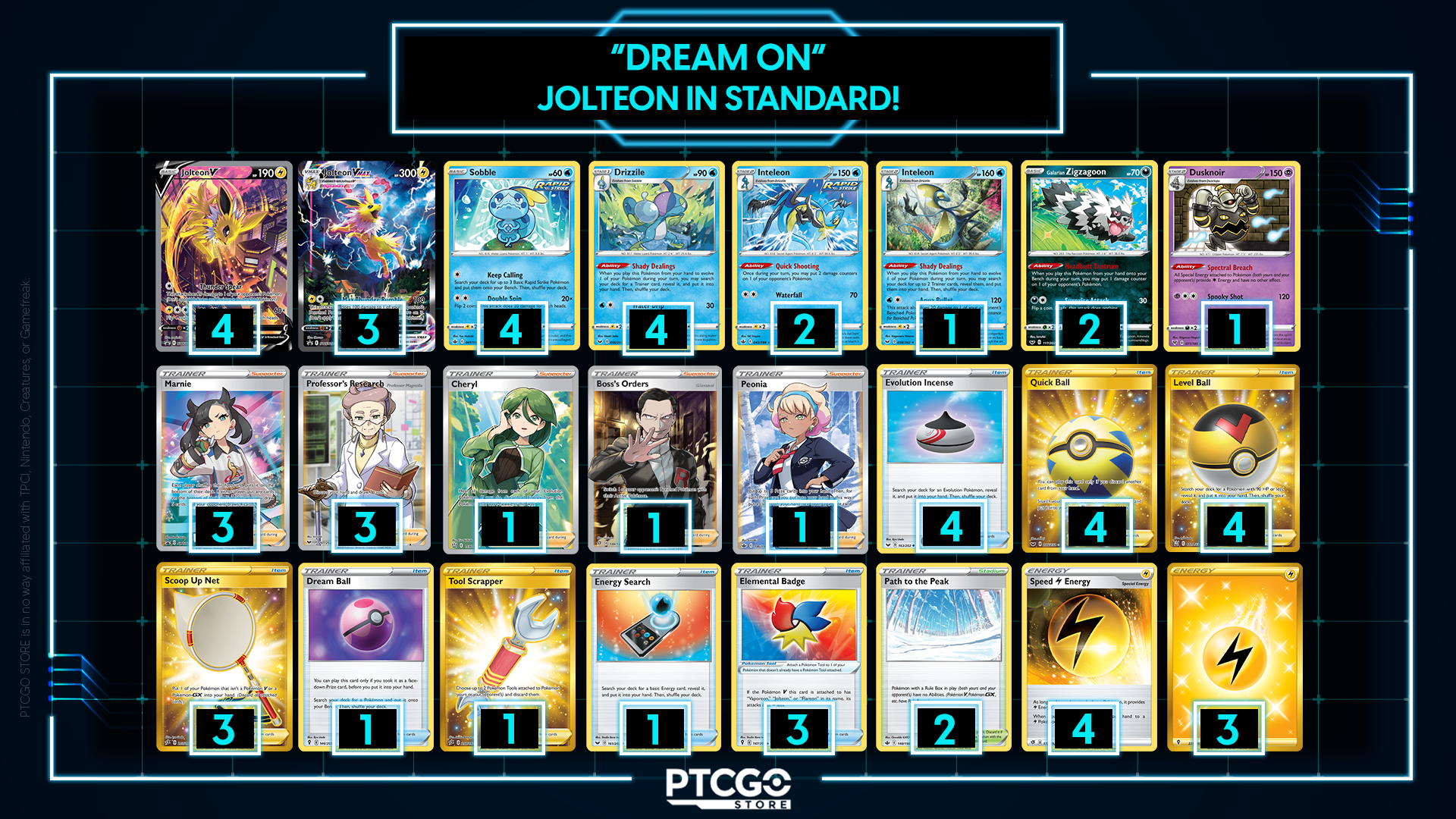 3 Jolteon VMAX - The main star of this show! Jolteon VMAX has a lot to love right now. Lightning-typing is super good against the likes of Suicune V, and it’s a moderately neutral type currently. The 300HP on this card is a little low for a VMAX, however, the most important thing to know is that unless you’re Fighting-type or Mew VMAX (with a few Power Tablets) you’re not going to OHKO this titan. Suicune doesn’t have enough time to get Ludicolo into play, and against anything else you can just snipe their engine down. Even Mew has a hard time finding Power Tablets will underneath Path to the Peak! Jolteon VMAX has an amazing attack, which can be used for a single Energy Card when there is an Elemental Badge attached. Jolteon VMAX also has a free retreat, which is one of the BIGGEST highlights this card has to offer! Being able to pivot all the time is such a strength, and the free retreat means that Leafeon VMAX isn’t hitting you too hard.
4 Jolteon V - Jolteon V is our ideal starter due to its free retreat and the first attack. It can place damage counters in the early game which can be a big help later to trigger Jolteon VMAX’s attack damage clause.
1 Dusknoir - This Dusknoir is one of the cheekiest inclusions in this deck, and for good reason! Single Strike tends to be one of our worst matchups, however, they play (for the majority) almost exclusively Special Energy cards. If you can get Dusknoir into play, the opponent will only have access to a single attack in their deck, which is Beatdown. Since we can predict their damage output, we can then win the game with Jolteon snipes as well as Cheryl.
2 Galarian Zigzagoon - This little guy is super important for cleaning up narrow KOs, and also for putting damage on Pokémon to trigger Jolteon VMAX's attack clause. Without these little guys, this deck would be garbage.
Inteleon Engine - We include this engine in here since we play Path to the Peak, and also because it is the most consistent engine possible for this deck. It works well because Inteleon CRE can trigger Jolteon VMAX’s damage clause and clean up key KOs.

2 Path to the Peak - I’ve included two copies of Path to the Peak in this deck in an effort to get around annoying abilities like Dark Signal on Umbreon VMAX or perhaps to shutoff the occasional Crobat V. We don’t have any Rule Box abilities in our deck because we utilize a non-Rule Box engine with Inteleon. We could include more copies of these to counter Genesect V in the future.
3 Scoop Up Net - Scoop Up Net has been making its home in Inteleon engines since the widespread play of this card. Being able to rinse and repeat the usage of Drizzile/Inteleon is very strong on its own, but in this deck, you’re able to reuse another very important ability: Zigzagoon’s! Placing damage counters is very important in order to fulfill Jolteon VMAX’s attack clause, so having Scoop Up Net to place damage counters is essential to our strategy. 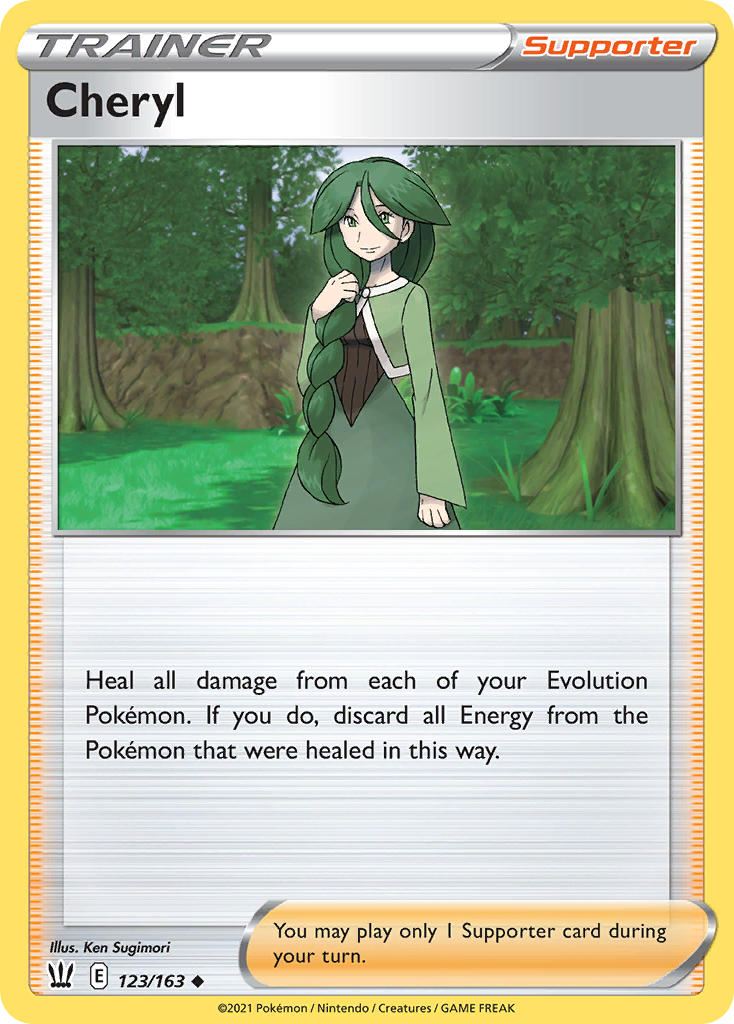 1 Cheryl - One of the strongest Supporter cards in this format, Cheryl may be a 1-of however it can be searched for at any time with the usage of Drizzile. We can abuse Cheryl since we play Elemental Badge - This essentially renders Jolteon’s attack cost down to a single (L) energy! Meaning: we can attack immediately after playing a Cheryl. This can buy us a key turn to get ahead of our opponents and steal the game away from them.
1 Boss’ Orders - Most people play more copies of this gust card however since there is currently no way to block benched damage, Jolteon VMAX can just ping Pokemon on the bench that we’ve already damaged. Boss is just helpful for allowing us to utilize the base damage that Jolteon does to the active Pokémon. It’s also searchable via Drizzile and Inteleon, hence why we only need a single copy.
1 Peonia - This is a weird Supporter however we play it for a good reason: we want to put our single copy of Dream Ball in the Prize Cards. If we’re able to do this, we’ll have a very easy out to our Dusknoir, which can benefit us in a couple of key matchups. Peonia is also just nice if you’ve had an off game and ended up prizing a few key cards - it can also help you establish Dusknoir if it is in the Prize Cards by nabbing it off Peonia, and then afterward shuffling it back into the deck with Marnie.
1 Dream Ball - It has obvious synergy with Peonia, and it is our only way of getting Dusknoir into play. Dream Ball needs to be in the Prize Cards which can prove difficult, but if we can establish Dusknoir without the usage of a Duskull, it can hit the field and begin impacting the game immediately.
1 Tool Scrapper - This is specifically in here to remove harmful tools, with the most harmful tool being Tool Jammer. Tool Jammer can turn off Elemental Badge which essentially renders us without access to energy acceleration via the form of a Pokémon Tool. Scrapper can also remove key Air Balloons and Scroll cards.
4 Speed Lightning Energy - This is one of the most broken cards in the entire deck! Having an Energy Cards that also allows you to draw multiple cards is just a no-brainer to play four of. Since we have energy acceleration in the form of Elemental Badge, who cares if the opponent plays a Fan of Waves on us? It just means we get to reuse the effect of the card once again later on since the Energy will go to the bottom of the deck. The one thing we do have to watch out for is our own Dusknoir because if we get it into play, all of our Speed Lightning Energy will become Colourless Energy that has no effect. We’ll be stranded with only three Lightning Energy.
3 Lightning Energy - This energy is searchable via Energy Search. Likewise, it is necessary to play basic energy if you play a Dusknoir line in your deck. This energy can’t be removed via Fan of Waves.

This deck is one of the hardest decks to play in standard format because it has so many choices to make each turn, and can be difficult to setup. That being said, if you like pokemon online decks that have many options and require a lot of expertise to play, then this is the deck for you! This deck doesn’t require too many PTCGO codes because it only needs a few cards from the new expansion, so it’s perfect for beginners and veterans alike. I’d suggest nabbing some PTCGL codes and building this Pokemon deck online because this deck will only get stronger. Until next time, have fun!
If you’re looking for PTCGO codes for Pokemon TCG online play, feel free to pick some up in our shop. We offer Pokemon codes at a very competitive price and ensure instant delivery of your PTCGL codes directly to your email. Thank you for reading this article today on the PTCGO store! Have a great day.
SHARE THIS POST
Previous Post
Next Post