“Dread End” – A Look at a Top Contender that Smashes Pikarom!

Written by Pokemon TCG trainer on 1/6/2021 at category
Pikachu and Zekrom Tag Team GX (or ‘Pikarom’) is a deck that has been caught dominating the online tournament scene. It’s been piloted by some of the world’s best players, including but not limited to Daniel Altavilla (#1 Global CP Leader for 2020) and Azul GG (arguably one of the most consistent players of all-time). It gained traction as a surprise deck because most players thought it was a ‘dead’ deck post-rotation, however it recently has proved that it has the tools to take out top contenders. Today’s article is all about a deck that I believe has the power to dethrone Pikarom from being the best deck, and also has the ability to take out other threats in the format. That deck just so happens to be a big fan favourite, Eternatus VMAX!
I booted up my Pokemon Trading Card Game Online app, loaded up some PTCGO codes, and then traded those Pokemon online codes to trade for this deck. I was very excited, and it honestly didn’t take that many PTCGO codes to make the deck. If you’re looking to buy some codes, we sell them here on PTCGO Store, and I highly urge you to check out our competitive pricing and swift delivery! Let’s talk about Eternatus today.

The main strategy of the Eternatus deck is to get as many Pokemon into play as possible in order to use it’s ‘Dread End’ attack for 270 damage! You’ll need to supply its low attack cost of two energy, however once you’re up and swinging with this 340HP beast it is very difficult to take it down. This deck is highly consistent through its usage of four copies of Crobat V and can be flexible with its damage output with the help of Galarian Zigzagoon! The deck is very simple, and able to achieve its goal time and time again – a swift, high HP Goliath that can OHKO most things by the second turn of the game. Piece of cake! Let’s look at one of the more recent Eternatus V deck lists that I’ve liked, created by one of the game's finest players, Isaiah Bradner!
Pokémon - 19
4 Crobat V DAA 104
4 Eternatus V DAA 116
4 Galarian Zigzagoon SSH 117
1 Hoopa DAA 111
1 Sableye V SSH 120
1 Yveltal TEU 95
4 Eternatus VMAX DAA 117
Trainer cards - 31
2 Marnie SSH 169
2 Pokémon Communication BLW 99
4 Boss's Orders RCL 154
2 Reset Stamp UNM 206
4 Quick Ball SSH 179
2 Pokégear 3.0 SSH 174
3 Power Plant UNB 183
4 Professor's Research SSH 178
4 Great Ball SSH 164
4 Switch BCR 135
Energy - 10
2 Hiding {D} Energy DAA 175
8 Darkness Energy Energy 7
Total Cards - 60

4-4 Eternatus VMAX – This is a lineup that is designed to ensure a turn two beast swinging for 240 damage on the second turn. Remember: the hardest Pokemon to search out in this deck will always be the VMAX, since it is not a basic Pokemon. As long as we draw into that card, we have an extremely high chance of establishing a T2 Eternatus VMAX. It’s honestly so hard for people to take down this Pokemon – nothing really can deal 340 damage in a single turn, barring a few standout Pokemon (Blacephalon UNB, Centiskorch VMAX, etc). Swinging for 270, you really take out most Tag Team Pokemon in one hit, and you 2HKO every single VMAX in the game right now. I find that it helps to soften up Tag Teams with Hoopa in order to ensure that your Eternatus doesn’t get damaged too much.
Eternatus V is a very good card at setting up future attackers. Going second, it can be clutch to use Power Accelerator in order to place energy onto a second Eternatus V. While a two energy attack cost on the VMAX may seem inexpensive, in the current format two turns to power up a Pokemon can make or break its viability. Luckily, Power Accelerator offers some built in energy acceleration for this deck and minds the gap. It also does a bit of damage too, which is great for poking at other V Pokemon before they VMAX.
4 Galarian Zigzagoon – this Pokemon is very reminiscent of Crobat G from the 2010 format; we strictly use this Pokemon for damage modification and nothing else. We don’t want to evolve into Galarian Obstagoon, we don’t want to attack with it: it simply fills a bench space to fuel Dread End, and simultaneously buffs our attack by 10 damage. Consider this: each Galarian Zigzagoon we place onto our bench is an additional +40 damage for our Dread End attack.
4 Crobat V – I’m sure you’re noticing a trend here, yes, we play A LOT of four-ofs in this deck for consistency purposes. Crobat V is our main source of draw since Eternatus VMAX’s ability only works if all Pokemon on the bench are Dark-type. We want to ideally play a Crobat V down every turn to dig deeper into our deck and fetch whatever resource we may need. Important to note is that Crobat V is a V Pokemon, and not a GX/EX, which means that its ability is not affected by Power Plant.
1 Yveltal – This is a tech mostly utilized in the mirror match, and it is fantastic. Many Eternatus decks right now are playing some form of Special Energy (Capture Energy, Hiding Energy, etc). Yveltals first attack can actually discard Special Energy, which can either set the opponent a turn back or potentially prevent them from attacking at all! Its second attack is also decent, but most of the time we won’t be able to use it due to people KOing our Yveltal after the first turn. This Pokemon is also a great pivot Pokemon since it has free retreat, and definitely merits a spot in this deck.
1 Hoopa – Hoopa is primarily in here as a poker that can soften up high HP Pokemon. Rather than attacking twice with an Eternatus VMAX, we can poke once with a Hoopa, and then follow up with an Etenatus VMAX in an effort to keep as much damage off of our VMAX as possible. Hoopa is also great at KOing non-V/non-GX basic Pokemon, such as Jirachi TEU, and gives us an option to donk our opponent for quick wins.
1 Sableye V – This is included in here to help us deal with Zamazenta V. We can usually push through one Zamazenta, but two is too much for this deck to handle. Use Galarian Zigzagoon to put damage counters on their Zam, and then follow up with a Crazy Claws for an OHKO. You can also use Yveltal to put damage onto a Zam.
3 Power Plant – Since our deck doesn’t utilize any GX/EX abilities, Power Plant can really gnaw into our opponent’s ability to setup their field. I like this card because it is a Stadium that only benefits one side of the field. As stated earlier, Crobat V gets around this Stadium and makes your opponent’s Dedenne-GX suffer. In the late game, if you combo this card with a Reset Stamp, it can often spell doom for the opponent if they haven’t thinned their deck out properly.

ADP – Even
This is a tough matchup because it’s often decided by two factors: does the opponent get a T1 Altered Creation GX off? Or do we pull off a T1 280 damage Dread End? If both occur then what happens? This matchup is a classic slugfest that often times gets lopsided pretty fast. Place all of your Zigzagoon damage onto their ADP just in case they play Big Charm or something of the likes, and if they play down a Zamazenta just try to use Boss’ Orders around it. If you must, prepare a Sableye V on the bench with an energy to threaten a Crazy Claws.
Mewtwo/Welder – Favourable
This is a matchup that is pretty easy since we can OHKO Mewtwo GX, and they often have a very hard time OHKOing us back. I think it’s easier said than done, but this matchup is a walk in the park if you get a T2/T3 KO onto a Tag Team. Most Mewtwo players are running Horror Psychic Energy, which means if we use Yveltal on them, we can remove certain attackers from their roster. They might try to get fancy by using Alolan Muk’s GX attack on us, however, we play a full suite of switching options which should be able to get us out of there no problem, and heal the Special Conditions they place on our Eternatus.
Pikarom – Favourable
This is the matchup we were trying to take down, and having a Favourable Pikarom matchup is something massive to gloat about! We can OHKO all of the Tag Team GX Pokemon in their deck regardless of Big Charm (with the help of Galarian Zigzagoon), and the only thing they can really do to stop us is use their Raichu and Alolan Raichu GX to Paralyze us. Well, our deck has come packed with heavy switching outs (there is literally four copies of Switch, and two Hiding Energy) in order to combat this. We shouldn’t really have any issues handling this matchup, but I’d advise you to take out the Raichu as quickly as possible in order to maximize your odds of winning this matchup.
Baby Blowns – Unfavourable
Baby Blowns is one of the few matchups that is terrifying, based upon the fact that they can OHKO us at any moment. Our best bet is to Boss’ Orders their Oricorio GX and use a Reset Stamp in the late game in order to restrict their options. Using Hoopa to pick their Jirachi off the field is always a smooth play too! You don’t even need to necessarily KO their Oricorio though with this new list – you could just play down a Power Plant instead. Power Plant will also shut off their Dedenne, which means the opponent could be off to a slow start. Perhaps the best way to approach this matchup is to KO their Zacian off the bench so that they can’t take a crutch turn and refresh their hand. Try to be as aggressive as possible and give your opponent as few turns as possible, and you can squeak out the occasional win against this archetype.
Centiskorch – Slightly Favourable
Yet another even matchup, we win this one by being overly aggressive. Our opponent will try to poke us with Volcanion, so poke their Centiskorch back with a Hoopa. We can use Power Plant to gain an edge with Reset Stamp in the late game and use Boss’ Orders to attack Centiskorch before it gets too many energy on it. Remember: the opponent can’t use Boss and Welder in the same turn, so plan accordingly!

I’m sure you’re already running to your computer and loading up your PTCGO Codes as we speak, so I’ll let you hop to it. Eternatus seems like it’s going to be a solid contender in our current format, so you might need some more Pokemon Online codes in order to build this deck.
If you’re looking for codes for Pokemon TCG online play, feel free to pick some up in our shop. We offer Pokemon codes at a very competitive price, and ensure instant delivery of your PTCGO codes directly to your email. Thank you for reading this article today on PTCGOstore.com! Have a great day.
SHARE THIS POST
Previous Post
Next Post 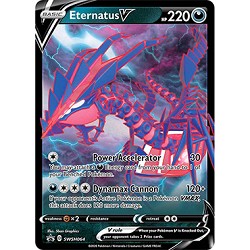