What’s poppin’ PTCGO store readers? Your boy Zach Lesage is here with another banger of an article and I’m here to let you know about one of the most fascinating cards in recent sets - Battle VIP Pass (Fusion Strike). I normally write my articles on certain decks or upcoming sets, but this one is gonna be a little different. My goal is to share some unique uses for this exciting new card and share a few lists that showcase that perfectly! Take a stroll through this article, learn some more about Battle VIP Pass, and stumble upon some super cool lists. If you need any cards for these decks, be sure to pick up some Pokemon TCG codes from the PTCGO store. As a super awesome bonus, use code zlesage5 to save 5% on your next order of codes! Anyways, let’s jump into what Battle VIP Pass is all about!

All About Battle VIP Pass 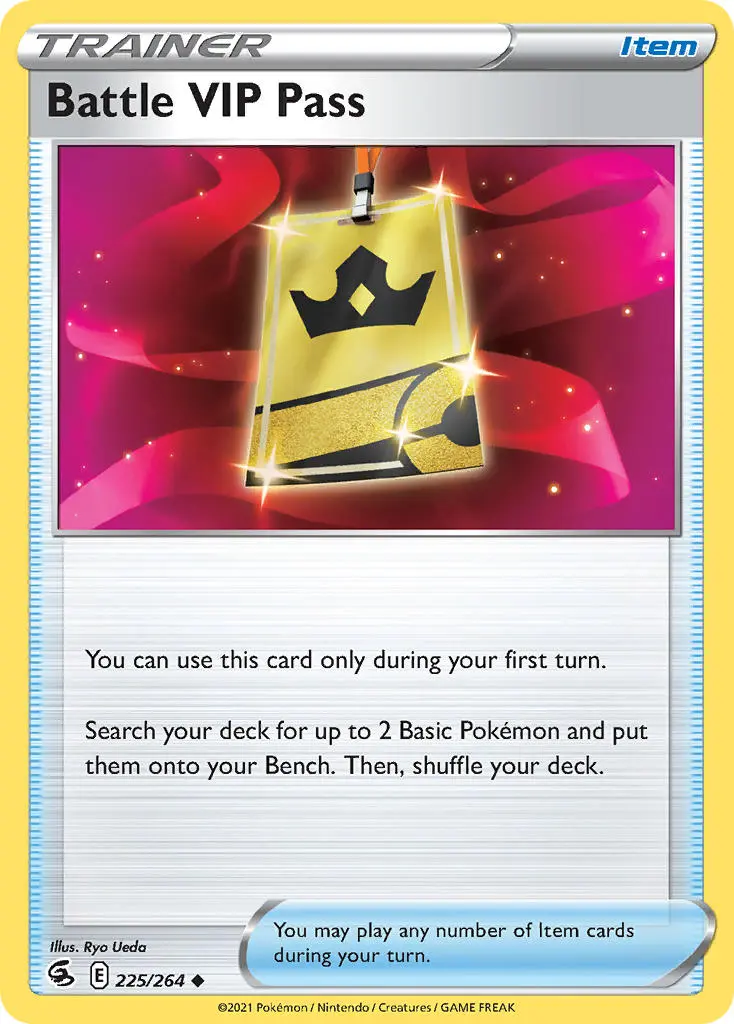 Battle VIP Pass is one of the most interesting cards from Fusion Strike and many players are sleeping on this card. Since the set is new and this card is obscure for some, lemme share what this card does! You can only use Battle VIP Pass on your first turn. You can search your deck for up to two Basic Pokemon and put them onto your Bench. While the drawback of only being able to use Battle VIP Pass on the first turn sounds bad to some, but it sounds solid to me! I get it - playing cards throughout the entire game is great! Cards like Quick Ball (Sword and Shield), Evolution Incense (Sword and Shield), and even Rapid Strike Energy (Battle Styles) can be played throughout an entire game! Here is my hot take on Battle VIP Pass and I’ll start with a question… Is the first turn more important than the last? That's a heavy loaded question and maybe it can be answered in a few ways, but I’m taking a look at the first turn as a foundation. When building anything you need to start off with a strong base! In this case, getting out your Basic Pokemon is the foundation I’m talking about. Gengar VMAX (Fusion Strike) decks are nothing without Houndour (Battle Styles) and Shadow Rider Calyrex VMAX (Chilling Reign) decks are nothing without Shadow Rider Calyrex V (Chilling Reign).
While some games are decided by that last second Boss’s Orders (Shining Fates), other games are decided by players getting set up on their first turn. Have you ever lost a game because you didn’t get an ideal set up? I definitely have lost my fair share of games due to a lack of setup and I’m sure Battle VIP Pass could’ve saved me. If you aren’t able to play it in the early game, you can totally get rid of them in the late game with Professor’s Research (Celebrations) or Quick Ball. Getting Basic Pokémon down is just so important nowadays and I truly think that Battle VIP Pass can allow for some amazing games to flourish! I wanna share a few ideas that I’ve seen and a few that I think might work so let’s check them out!

My friend and The Shuffle Squad (@TheShuffleSquad) teammate Vaughn (@VaughnPTCG) played a super unique Mew VMAX (Fusion Strike) deck to the Late Night Series #15 event and ended up locking up his spot for the Top 16 early in the event! While many players increase the count of Battle VIP Pass, Vaughn only played two copies because he plays Peony (Chilling Reign) that can search for anything! Anything usually ends up being a couple copies of Battle VIP Pass to search out a bunch of Genesect V (Fusion Strike) to draw cards with Fusion Strike System. Let’s check this list out! 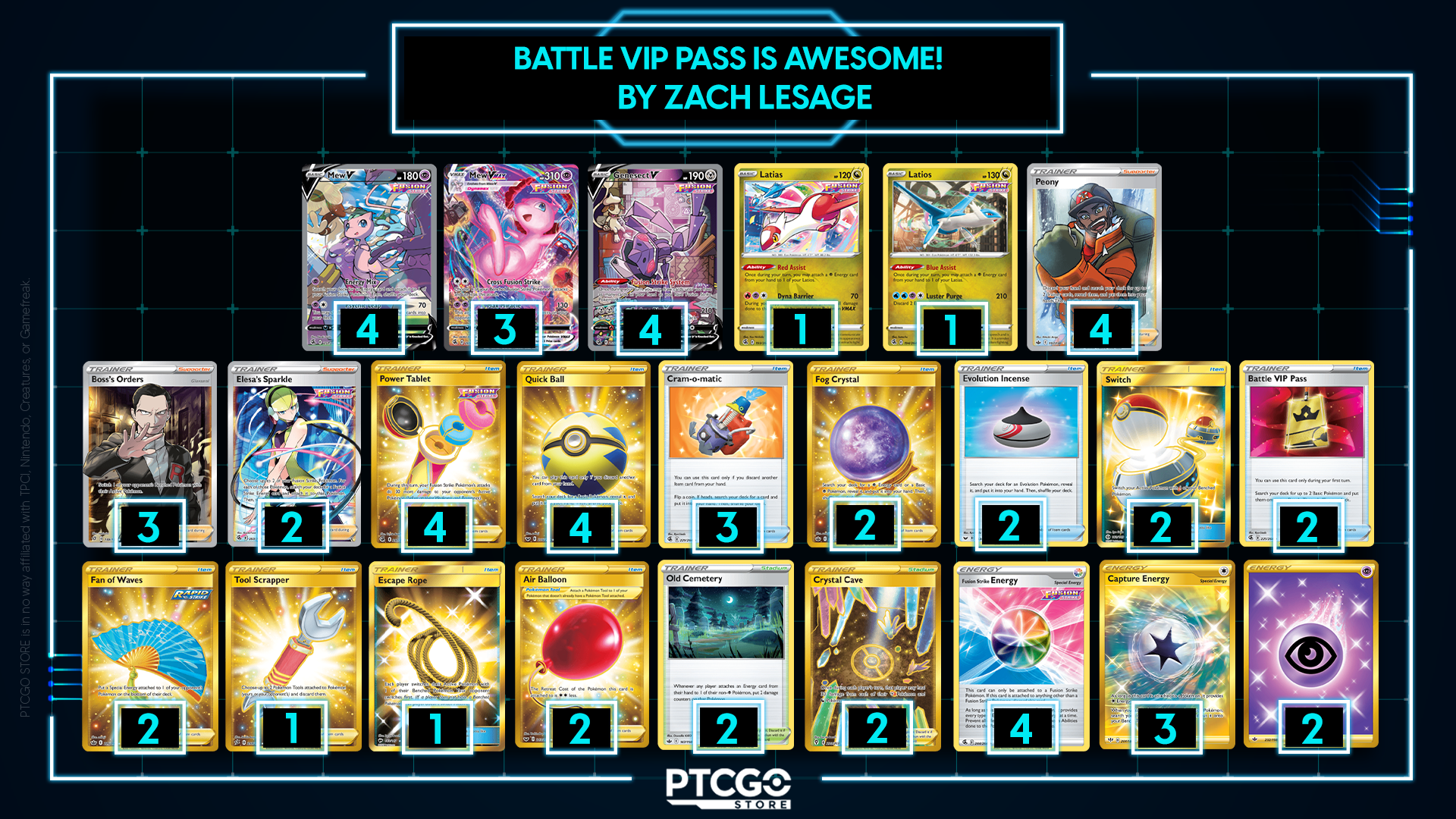 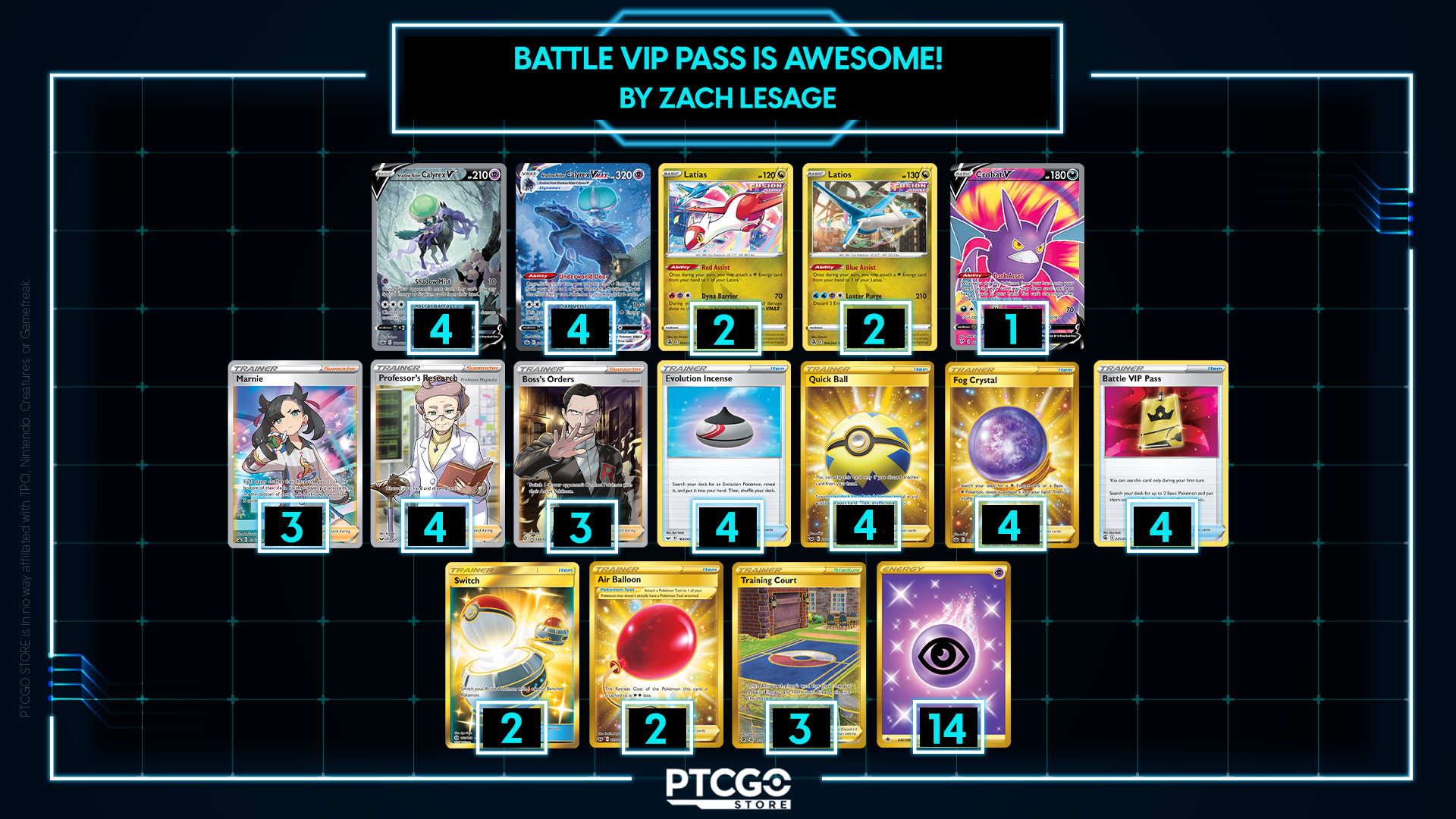 I often say that any Single Strike deck is playing the “Find Houndour Trading Card Game” instead of Pokémon and I think Battle VIP Pass can help this deck out! Getting out Houndour quickly allows this deck to Evolve them into Houndoom (Battle Styles) the following turn! If you can make this strategy work you can easily accelerate Single Strike Energy (Battle Styles) to your Gengar VMAX and get some awesome KOs. Let’s look at this list: 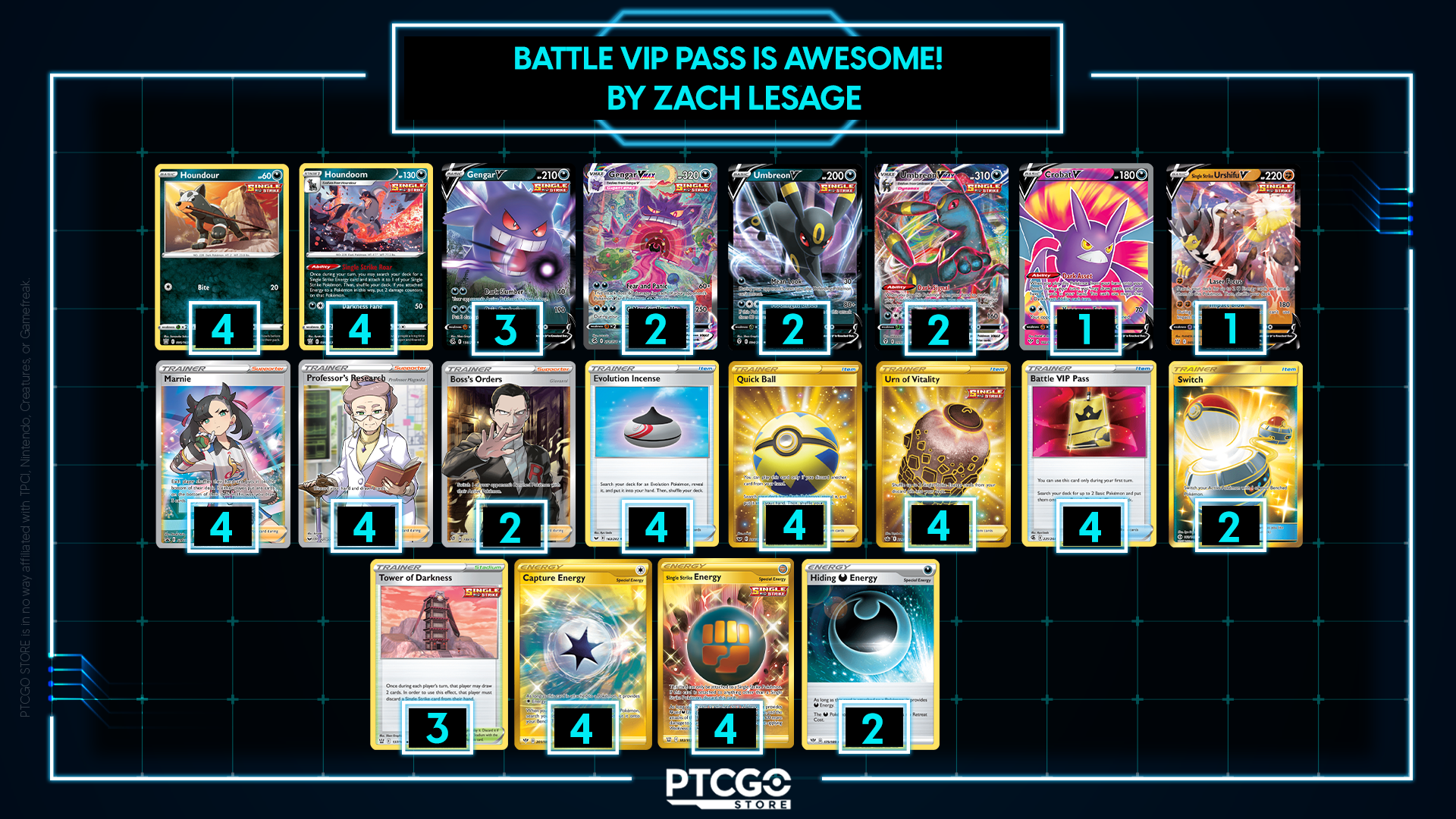 As the community continuously discovers pokemon online decks in our new Fusion Strike format we need to look for new opportunities to build these decks. I think that Battle VIP Pass is one of those cards that will find its way into some top pokemon online decks over time and I’m hyped for that future of the game. Fusion Strike might be a massive set, but there are definitely some gems in this set. As I test more of this set, I will share all of my discoveries here with our Pokemon TCG community! I hope that you’ve enjoyed reading this article and I’ll catch up with everyone with my next one! Happy testing!

Zach Lesage is a contributing writer for the PTCGO store. As a Toronto local, he has been playing the Pokemon Trading Card Game since 2005 and creates Pokemon content as his full time career. Under the moniker of theloneblown, he creates YouTube content, streams on Twitch, and provides hot takes on his Twitter. With multiple prestigious accomplishments in the game, such as 2020 Players Cup 2 Champion and 2020 Oceania International Championships Finalist, he has proven his success in the game. Outside of the game, he travels the world, enjoys the culture of designer streetwear, and is a professionally trained chef. You can catch him at most Pokemon events and follow him on Twitter @ZachLesagePTCG.
SHARE THIS POST
Previous Post
Next Post