Written by Gabriel Smart on 3/1/2022 at category Deck Lists
Hey everyone, it is Gabriel Smart, back with another article for PTCGO Store. I hope everyone has been enjoying the release of Brilliant Stars! This set has benefited the Pokemon Trading Card Game greatly, and has allowed for brilliant new combos to be birthed into the meta! The Weekend of 2/27-2/28 recently saw Full Grip TCG host a 2k tournament run in Akron Ohio. Casted by Andrew Mahome (TrickyGym), And Chip Richey(Chip Richey), we witnessed some of the most highly competitive TCG we have seen during the Covid 19 Era! Riley Hulbert the 2018 Dallas Regional Champion reigned supreme this weekend with his tournament-winning Arceus VSTAR (Brilliant Stars) Duraludon VMAX (Evolving Skies) deck, tearing through some of the metagames most fierce decks! Today is a day to take a dive into two of the event's most intriguing decks. Let's begin with the deck that took the event down! 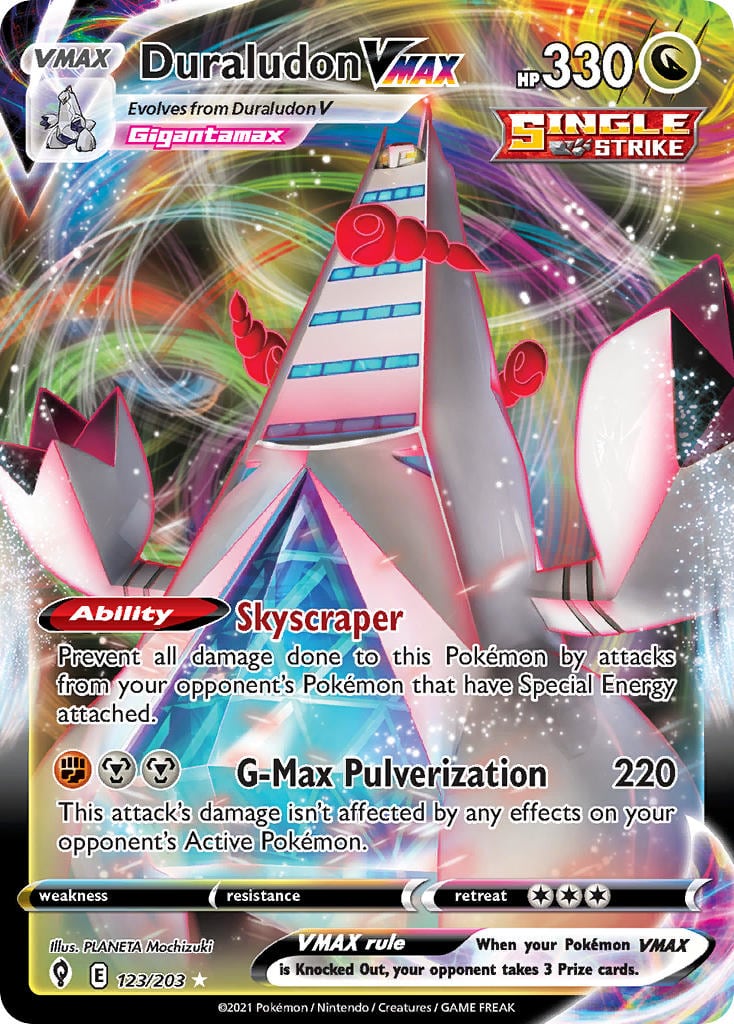 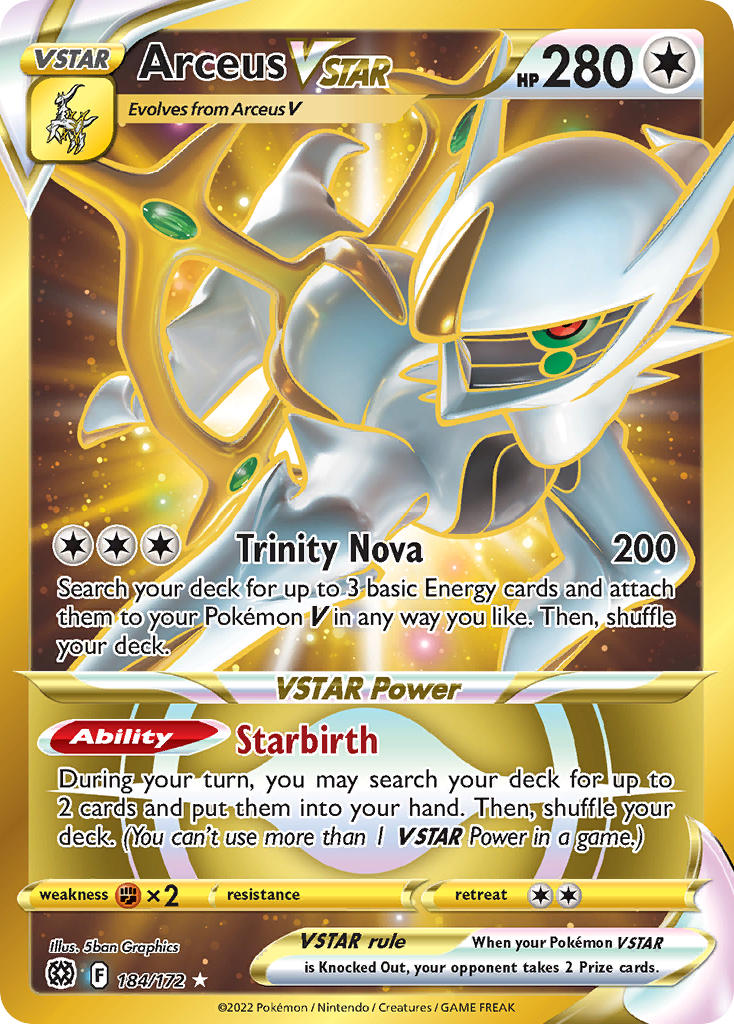 Taking down the Full Grip 2k event, was none other than Duraludon VMAX Arceus VSTAR! Piloted by Riley Hulbert, he was able to reign supreme over the competition. This deck's focus is the attack early with Arceus’s Trinity Charge, or Trinity Nova, to be able to power up Duraludon VMAX’s GMAX Pulverization Attack. Arceus VSTAR (Brilliant Stars) ability Starbirth allows us to search for our combo cards like Single Strike Style Mustard, Choice Belt (Brilliant Stars), Double Turbo (Brilliant Stars), and more! Arceus is the engine that helps the deck spring to motion, and Duraludon VMAX is going to be the finishing attacker to conclude the game. What older iterations of the Duraludon VMAX deck struggled with, was it did not have an effective way to accelerate energy onto their Pokemon. This led to the deck being easily overwhelmed, by decks that had a quicker tempo than itself. Now with Arceus, you can be attacking with Duraludon as fast as turn 2! Let's take a look at the decklist: 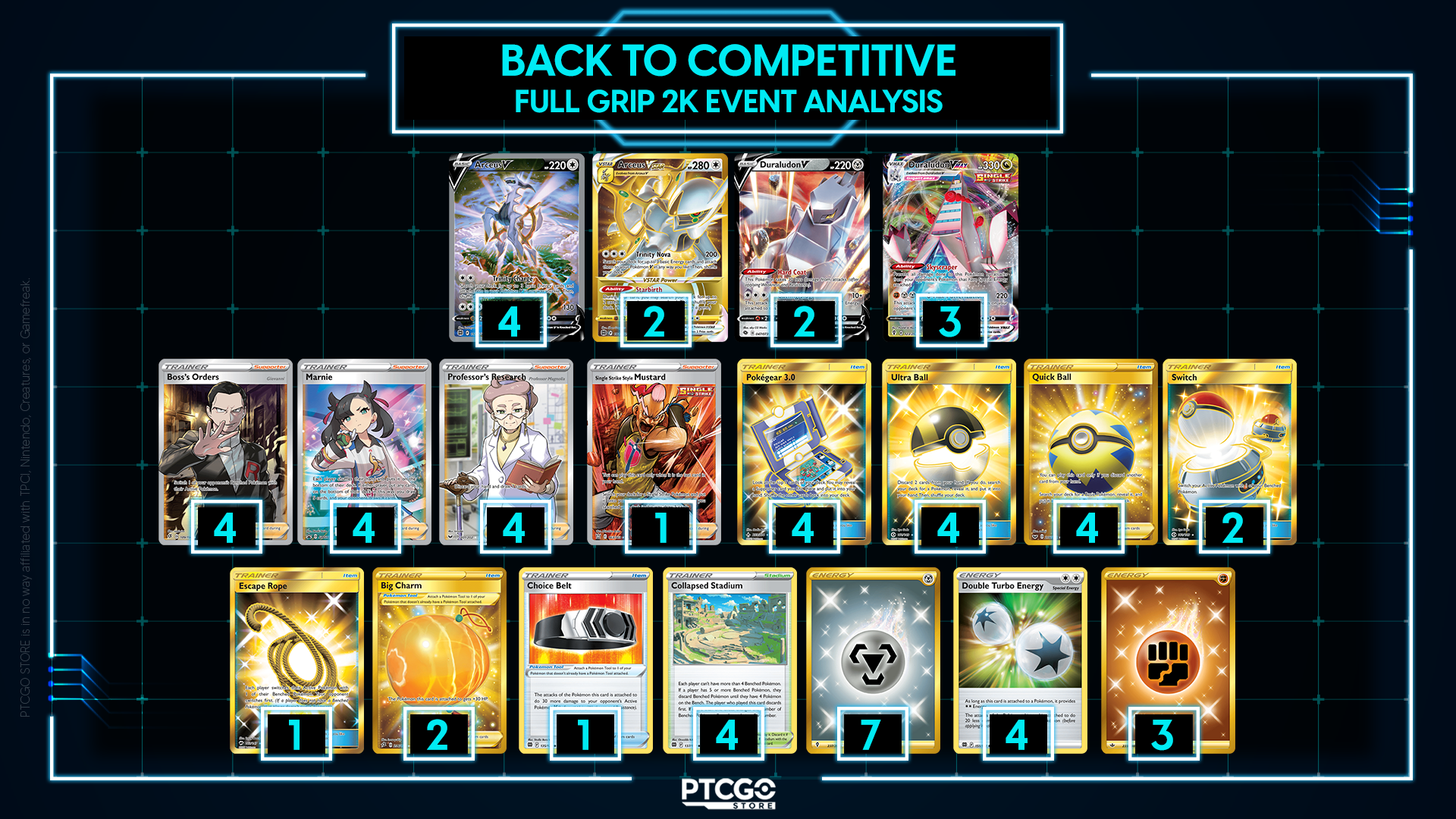 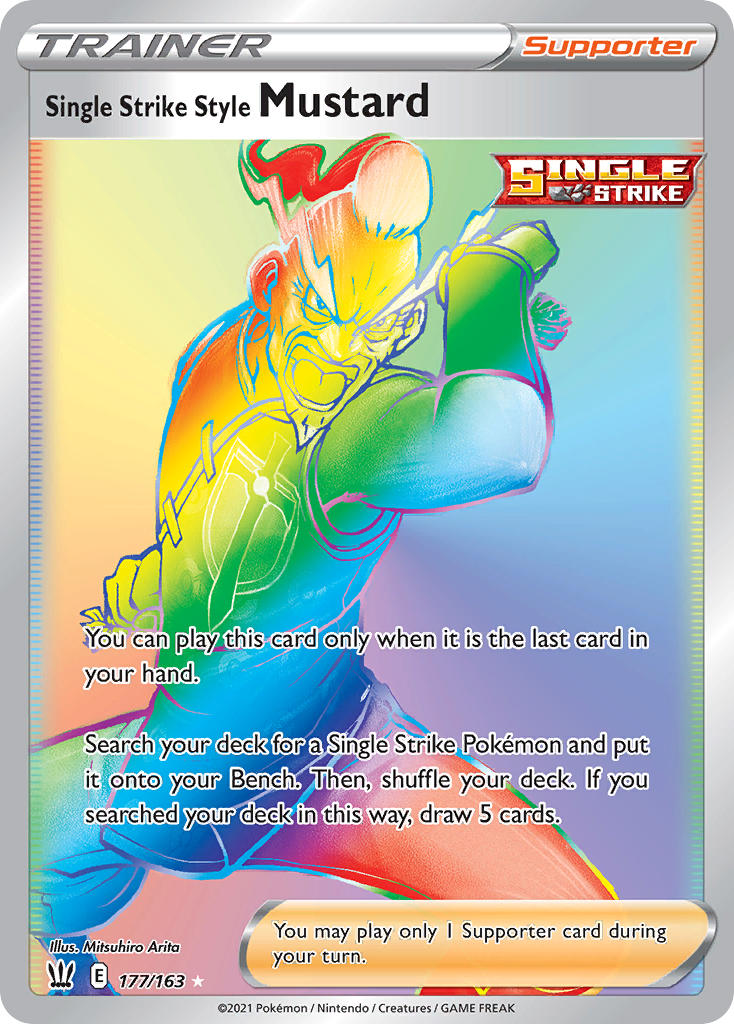 Single Strike Style Mustard (Battle Styles) is one of the inclusions in this deck that I was not expecting to see in this deck! But in reality, it makes a lot more sense than people think. With Ultra Ball, Quick Ball, and Starbirth VSTAR, all being present in this deck, it has allowed for it to be easier than ever, to thin your hand down to 1 card, to be able to activate Single Strike Mustard. This will allow us to even get a Duraludon VMAX (Evolving Skies) on the field turn 1! A quick Duraludon VMAX really puts the pressure on the opponent. Another reason this card is played is that Duraludon V is a Pokemon that does not want to be opened during the beginning of the game. This deck's entire strategy is to start Arceus every single game, to be able to power up Duraludons quickly. This means, the heavier counts of Duraludon V, can greatly hinder your early turns. Playing Single Strike Style Mustard, allows us to cut down the count of Duraludon V, because it is less of a necessity when we can create a Duraludon VMAX without the V. 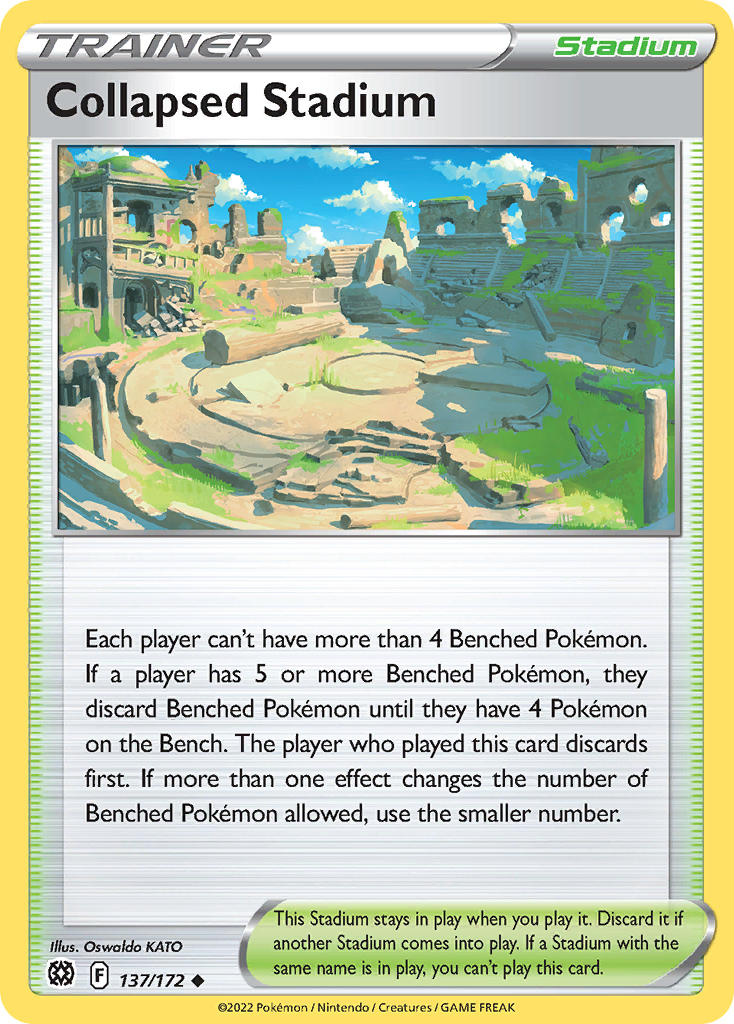 Now, here is a card that I was not expecting to be so powerful in a deck like this. In lists of old, Crystal Cave (Brilliant Stars) has been the go-to stadium for Duraludon based decks. Being able to heal damage on your beefy Pokemon, has always been powerful for the deck. Now, we have another stadium that takes it place! Collapsed Stadium (Brilliant Stars) reduces both sides of the field's benches down to 4. This will create multiple bench constraints for some of the most influential decks in the Pokemon Trading Card Game. Decks like Mew VMAX (Fusion Strike), Suicune V (Evolving Skies), Inteleon based engines, all will struggle to this stadium, as their decks heavily rely on having a bench full of Pokemon! Typically, this stadium will not affect you negatively, as Duraludon based decks typically do not bench very many Pokemon! Overall, this card is a great disruption stadium, and causes another obstacle that decks need to go around.

Overall, I can see why this deck won the tournament. Its impressive matchups against Single Strike, Rapid Strike, Eternatus, oneprize decks, and much more, really made it an incredibly strong call for the Full Grip event. I will say, I think as the meta begins to develop more, I am concerned about players trying to tech for this variant of the deck. However, I remain optimistic that Arceus VSTAR Duraludon VMAX will remain a force in the meta in some capacity. Now, let's get into another big surprise of the weekend!

One of the promising occurrences to come out of the Brilliant Starsmetagame is the innovation that has been taking place during these first couple weeks of Brilliant Stars being released. This meta currently, is not just one deck dominating, it's a plethora of new, and old decks, that are holding their own. With cards like Ultra Ball and Arceus VSTAR being injected into the Pokemon Trading Card Game, it has allowed for some crazy new combos to arise. This deck is no exception. Flygon Beedrill was a deck no one was expecting during the Full Grip Tournament. Although it did not win, it finished with an Impressive 16th place finish. Michael Slutsky piloted this deck just missing out on top 8! Let's take a look at the deck 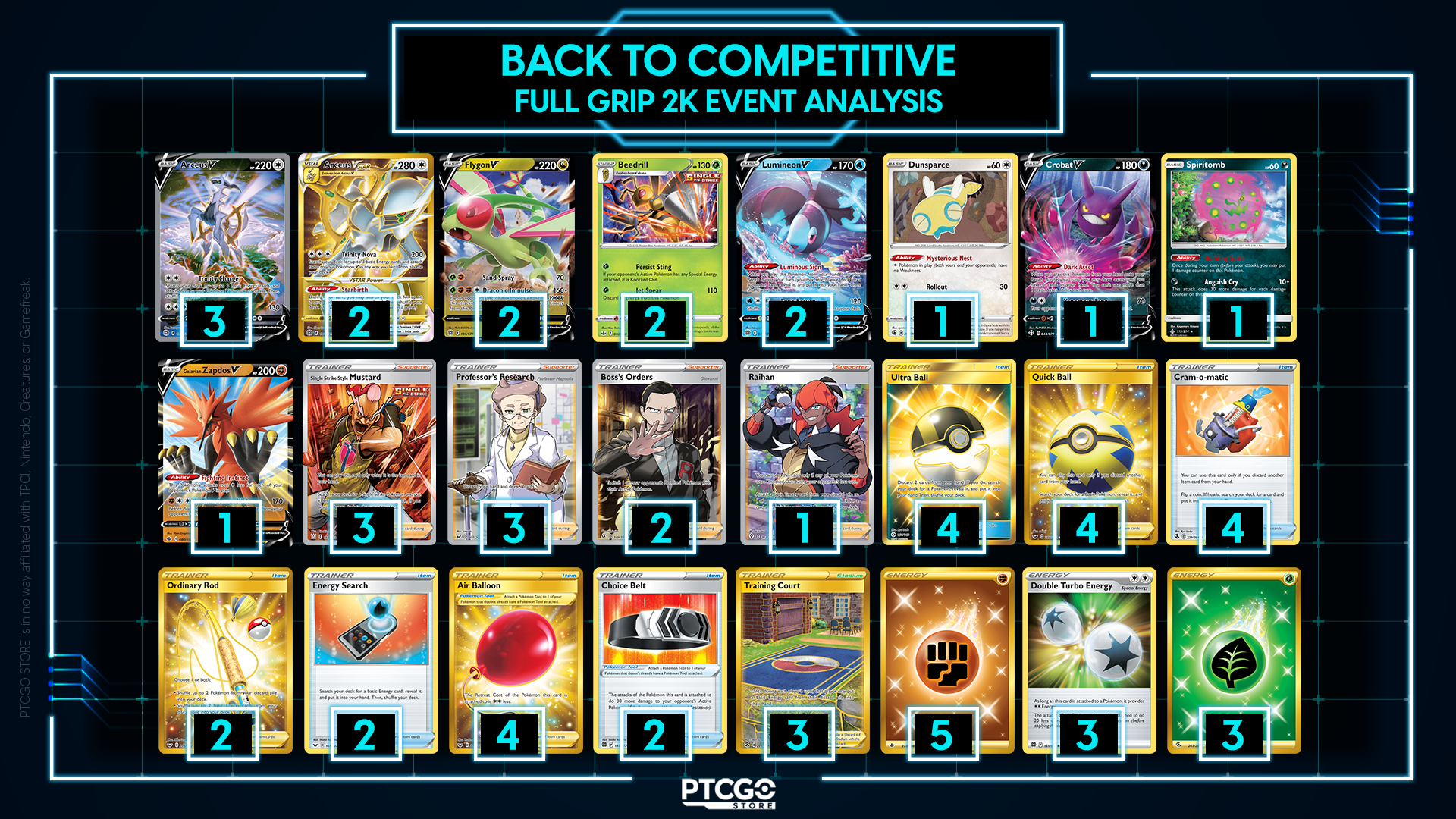 Arceus VSTAR (Brilliant Stars) is going to be the engine of this deck. For our deck to be able to set up, using Trinity Charge, or Trinity Nova will be critical to be able to attack with Flygon V (Brilliant Stars). With the aid of Starbirth, it will allow us to be able to consistently set up our board state. One of the truly magnificent benefits of playing Arceus in your deck is that it allows for decks with multiple moving parts, to easily compartmentalize their actions, and build more threatening board states much quicker. 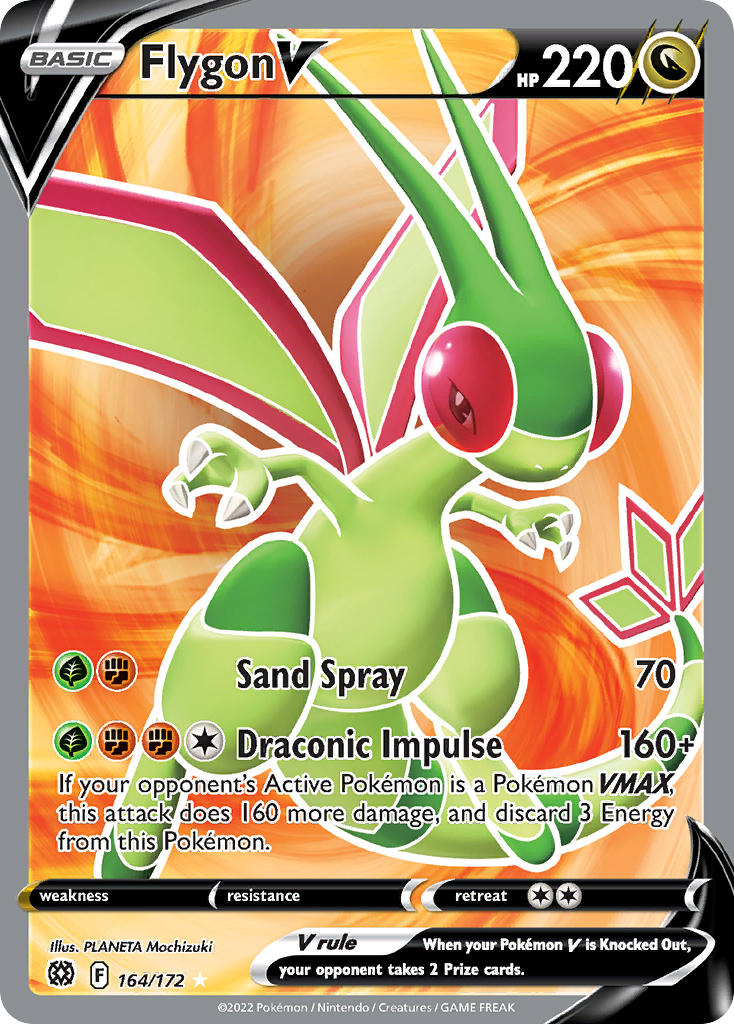 When Flygon V was released in the translations a couple of months ago, leading up to the release of Brilliant Stars, I always thought the card had potential, but never this much. Draconic Impact deals a respectable 160 damage, and if the opponents active is a VMAX, that damage is doubled. This means that Flygon is doing a whopping 320 damage, for 4 energy! Although the energy requirement is hefty, it is much more realistic to achieve, with the help of Arceus’s Trinity Charge, or Trinity Nova! Flygon, although requiring a large amount of energy to attack, is one of the most hard-hitting Pokemon in the format, and I expect it to remain a relevant attacker for quite some time!

Here is another wacky card that has been included in this list. Beedrill (Battle Styles) is one of the most underappreciated cards currently in the format. One of the reasons it has not seen consistent success is its struggle getting onto the field. Now with cards like Lumineon V (Brilliant Stars), Ultra Ball (Brilliant Stars), and Arceus VSTAR (Brilliant Stars), is it easier than ever to use Beedrill consistently, and effectively. The strategy of our deck will be to attack early with Arceus, rotate into Flygon V, and then use Single Strike Style Mustard (Battle Styles) to clean up the last Pokemon on your opponent's side of the field with Persist Sting. Beedrills' attack knocks out any Pokemon that has special energy on it. Pokemon tried to keep this card balanced by restricting the power of an attack to a stage 2 Pokemon. Now, with Mustard, we are able to cheat the evolution mechanic, and fully abuse this card's powers! 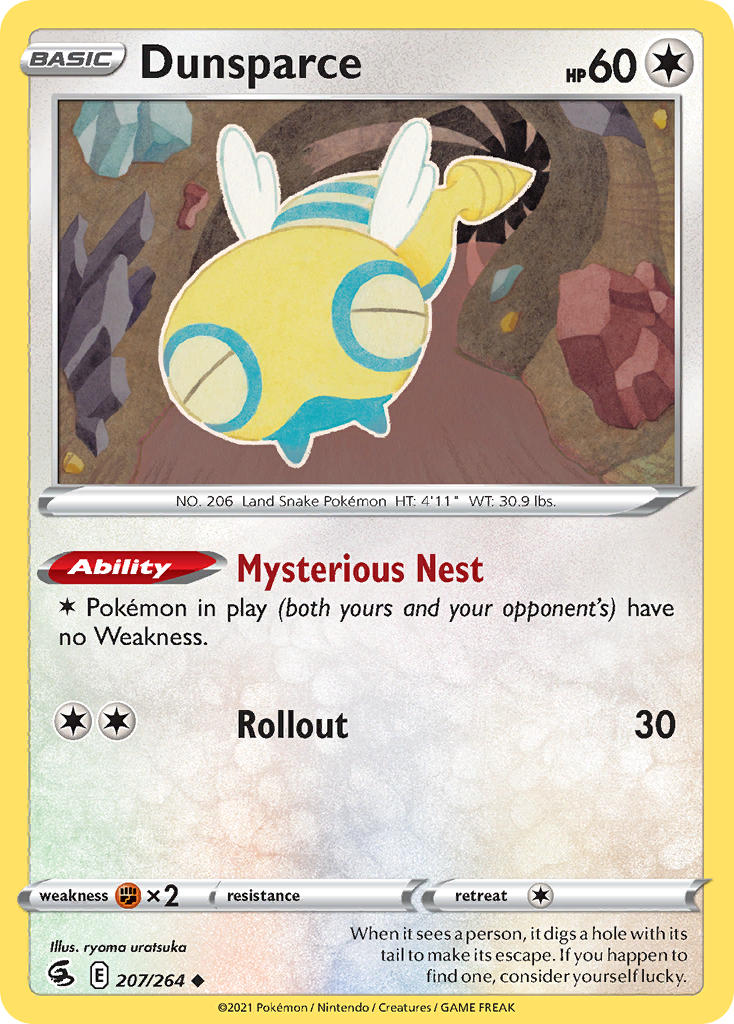 This is a card that has rarely seen any play since its release in Fusion Strike. Colorless Pokemon have not been relevant for some time, so Dunsparce (Fusion Strike) has not been able to shine! Now, with Arceus being such a relevant Colorless type, also being weak to fighting, Dunsparce finally has a place to prove its worth! Dunsparce's ability Mysterious Net turns off weakness on all Colorless Pokemon in play. This means fighting attacks will typically not be able to one-shot Arceus anymore! This is absolutely critical, as decks like Rapid Strike Urshifu, SingleStrikeUrshifu, Stonejourner, Zapdos V (Chilling Reign) remain relevant in the format. Having Dunsparce will aid greatly in those fighting deck matchups!

The last relatively strange card to be included in this deck is Spiritomb (Chilling Reign). It is pretty simple as to why it was included. Counter every Mad Party deck in the room. Ghostly Cries deals 10 damage on any of your opponent's Pokemon for each Pokemon they have in their discard, then they are forced to shuffle them all back. This is used to directly counter Mad Party, and it will wipe out their board quickly! This does seem to be the only relevant matchup this card is used for, and since Mad Party is not very popular, I think it can be cut for another consistency card. It's an intriguing inclusion though.

Flygon VArceus Beedrill is one of the most entertaining pokemon online decks to play, and it will really surprise you with how powerful it can be. I look forward to seeing what crazy concoctions players are able to make with Arceus VSTAR! That is all for me today. That is all for me today! If you are looking for any cards in this article, make sure to check out PTCGO Store for PTCGO codes! If you are looking for a discounted product, make sure to use code SmartTCG at checkout for 5% off your next order! 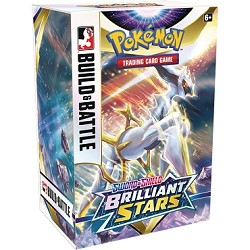