Written by Pokemon TCG trainer on 1/27/2022 at category Deck Lists
Hello everybody! I hope you had a great holiday filled with lots of family time and safe ventures. As a continuing series on PTCGO Store, I’ve enjoyed writing about Gym Leader Challenge (GLC) content! Today, I’ve written about my favorite GLC deck, Colourless Control. Spoiler alert: this deck is not for beginners or the faint of heart. There’s a lot to unpack here, so let’s hop to it!
I booted up my Pokemon Trading Card Game Online app, loaded up some PTCGO codes, and then traded those Pokemon online codes to trade for the decks in this article. I was very excited, and it honestly didn’t take that many PTCGO codes to make the decks. If you’re looking to buy some codes, we sell them here on PTCGO Store, and I highly urge you to check out our competitive pricing and swift delivery! Let’s talk about Colourless-type in the Gym Leader Challenge format today.

NOTE: This deck is extremely difficult to pilot to success, and I’d only suggest taking it to a tournament if you are well-versed with Control-style decks! That being said, please practice lots to ensure you understand the ins and outs of this deck. 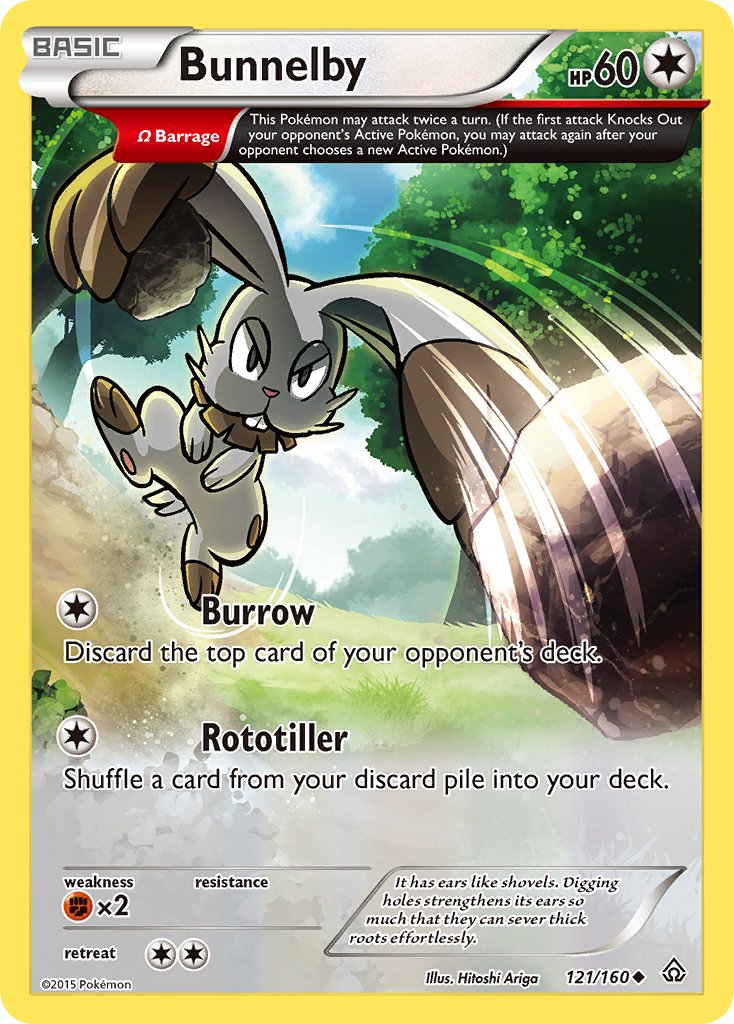 The ultimate goal of this deck is to deck out our opponent by trapping a Pokémon active and using Bellelba & Brycen-Man over and over. We recycle resources with Bunnelby and drawback into them with Pidgeotto. Here’s a walkthrough of what to do in phases, because that is probably the best way to describe it: 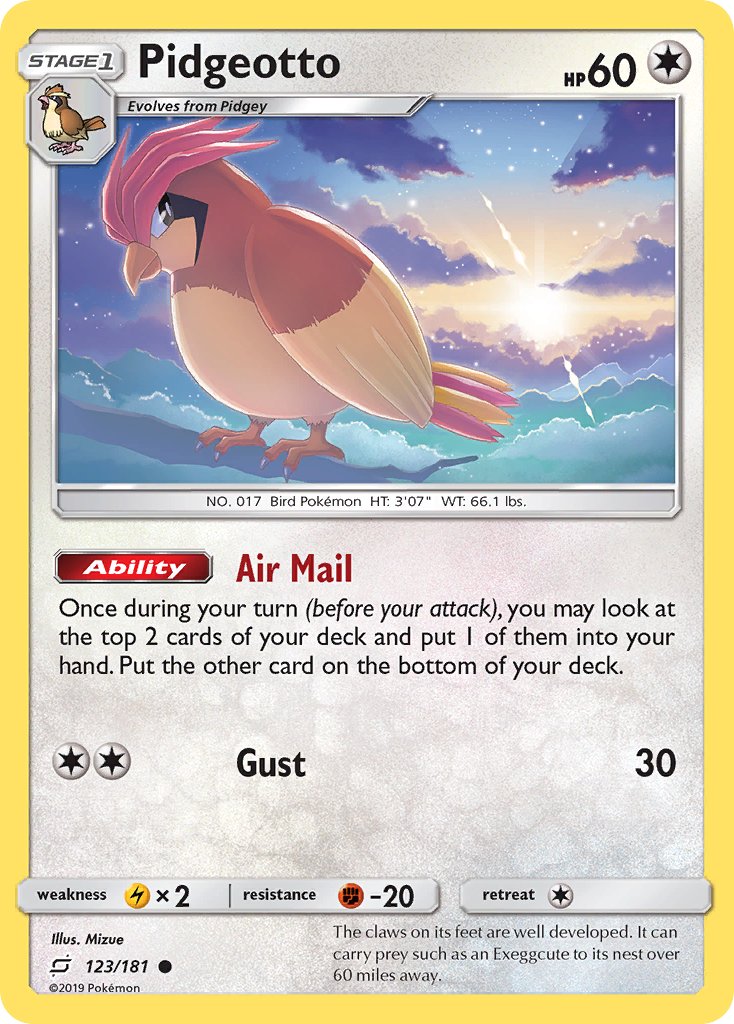 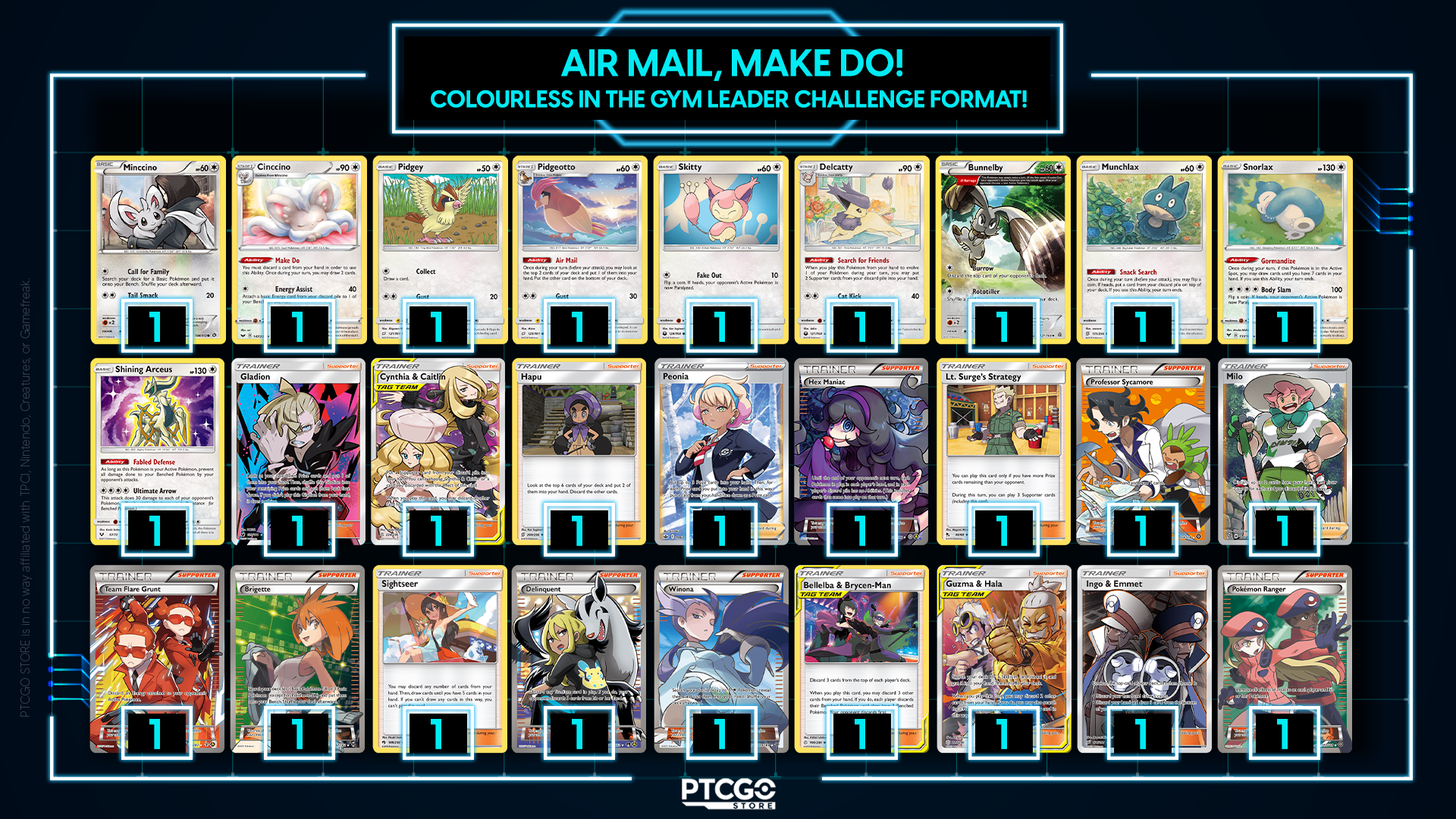 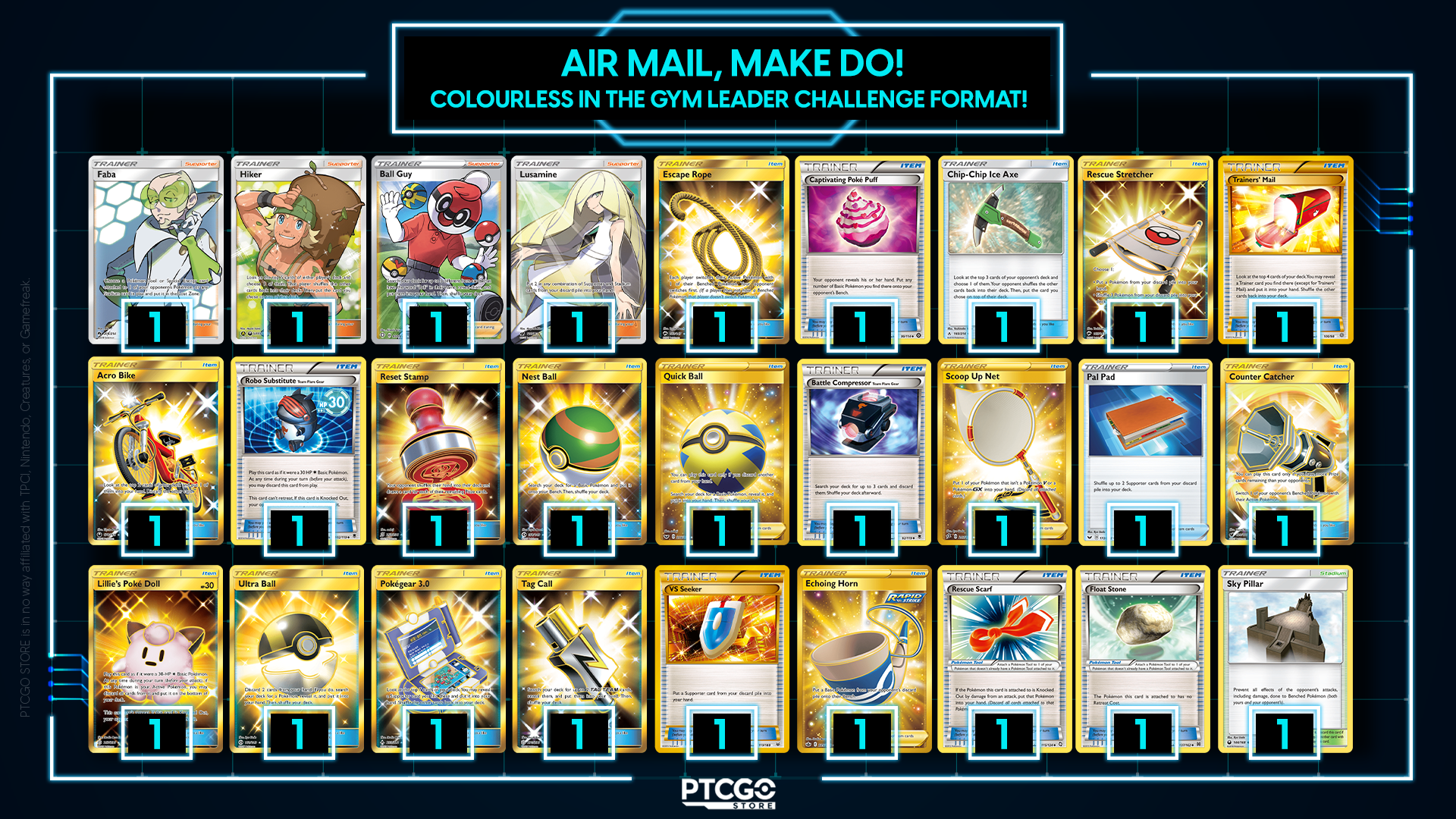 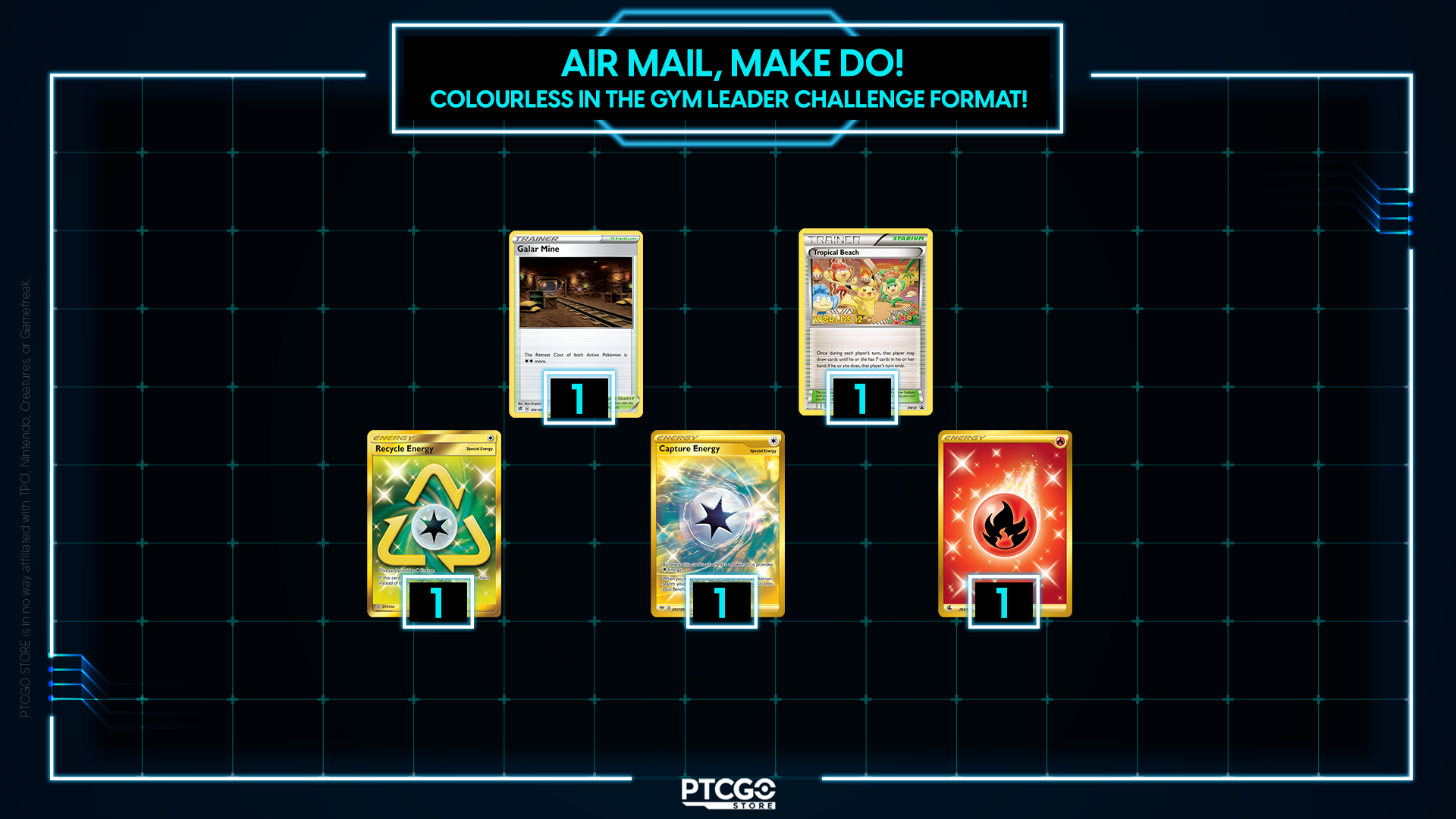 1 Bunnelby - The heart and soul of our deck, this card was once banned within this format for having an “Alpha Trait”, which can be perceived as a Rule Box (which goes against the rules of the GLC format). However, it’s been unbanned now, and its predecessor, Oranguru, was banned in place. Bunnelby is very fragile, however, it can recycle the two cards (using Rototiller x2 [because of the Alpha Trait allowing it to attack twice]) we’ll need to complete our lock: Scoop Up Net and Chip-Chip Ice Axe. Burrow is also unique because it can expedite our strategy to win once our opponent has 8 cards in the deck - we can use Lt. Surge’s Strategy, Brycen Man & Bellelba, VS Seeker, and double Burrow to mill our opponent! 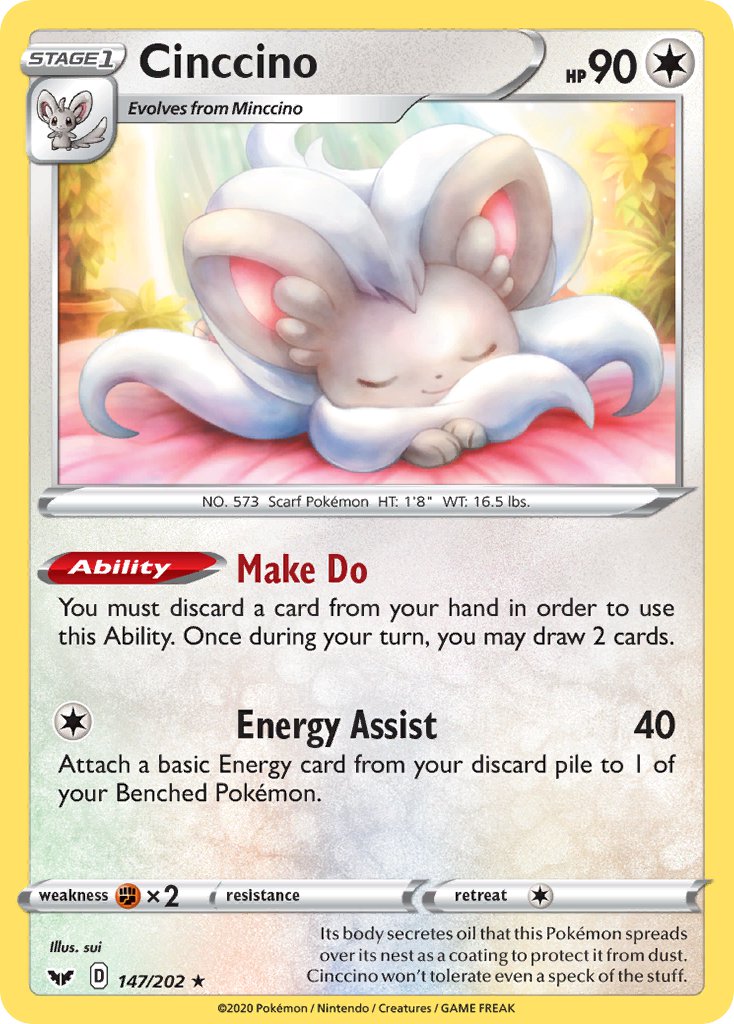 1-1 Cincinno - A very aggressive draw Pokemon that will aid us in drawing through our deck. It can also potentially take KOs provided you need to take a Prize Card.
1-1 Pidgeotto - Pidgeotto is a less aggressive drawer than Cincinno, however, it has an extremely important purpose: once you get your deck down to 0 cards, and Rototiller two cards back into your deck with Bunnelby, you’ll need to use Air Mail + the card you draw for your turn in order to redraw into the resources you just shuffled back in. If you used Cincinno’s Make Do ability, you would need to discard a card each time to draw; this would very quickly run you out of cards in hand to discard, and you would lose the game within a finite amount of turns. Pidgeotto provides longevity and the ability to have an infinite amount of turns to outlast the opponent.
1-1 Delcatty - A Pokémon lime that can infinitely recycle Supporter cards with Scoop Up Net. 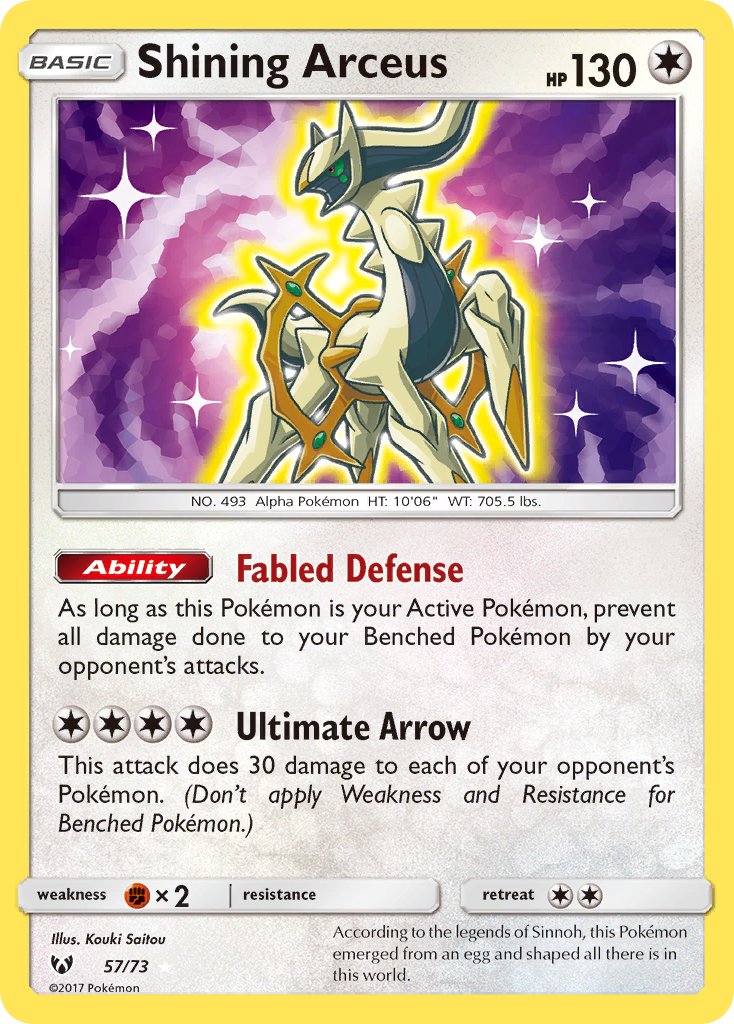 1 Shining Arceus - A key card to buy time with against the likes of Amazing Raikou and Amazing Kyogre.
1 Snorlax - A searchable way to draw cards very easily.
1 Munchlax - A way to get back key resources that have been discarded. I only use this Pokémon if I’m not attacking or using Snorlax’s Gormandizer ability.
1 Peonia / 1 Gladion - These are vital because you need a few key pieces to establish our “lock” with this deck. Peonia is the most efficient way of getting these pieces out of the Prize Cards. If you only have one key piece in the Prize Cards, Gladion is awesome to fetch it out - sometimes, you even need to Gladion for your Peonia! These are essential since we don’t deal damage in our deck, therefore we can’t take Prize Cards reliably. 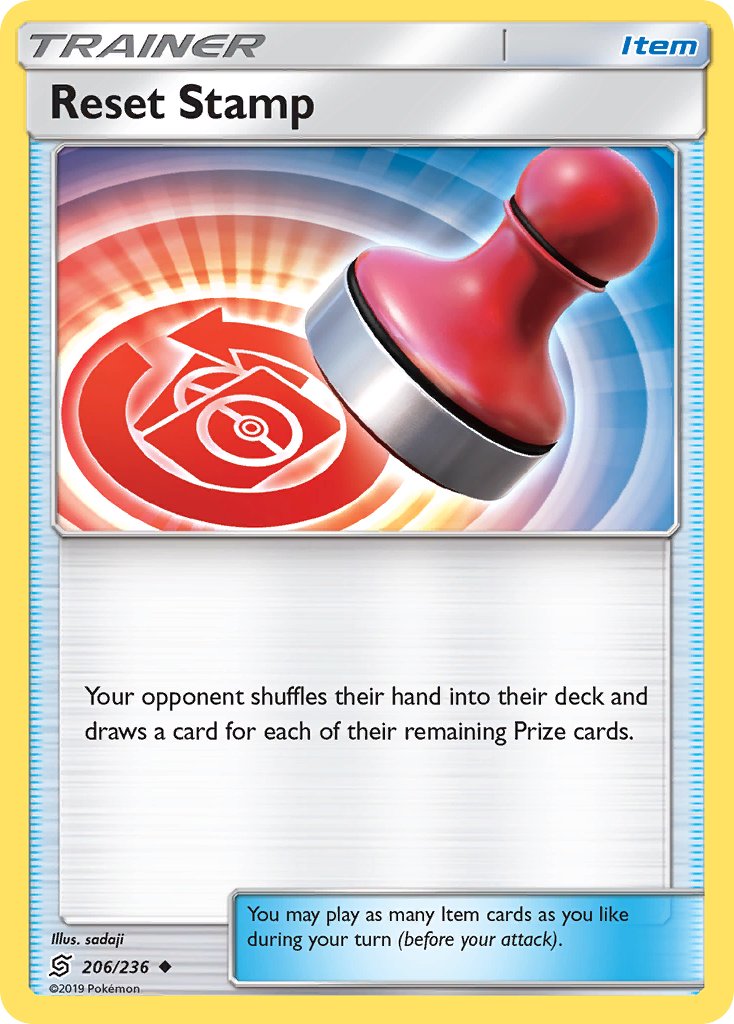 1 Reset Stamp / 1 Delinquent - A key combo that must be utilized in order to get our opponent’s hand down to zero cards. Keep in mind Delinquent requires a Stadium in play to use.
1 Chip-Chip Ice Ace / 1 Hiker - Ice Axe is one of the most important cards in our deck. It allows us to control our opponent’s top deck, and feed them cards that aren’t Supporters or useful energy. Hiker does the same thing, but it also can be a “safety net” on the off chance that Ice Axe sees multiple good cards for the opponent.
1 Scoop Up Net - This card allows us to reuse Delcatty’s ability over and over, giving us infinite Supporters. 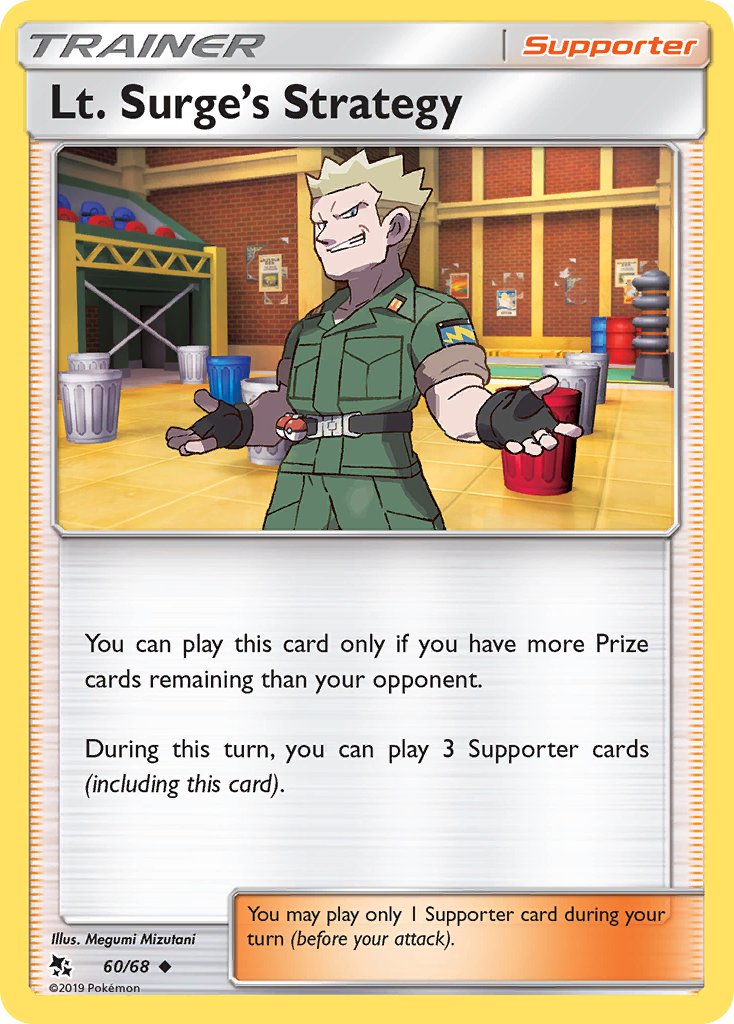 1 Lt. Surge’s Strategy - A perfect card for a deck that will theoretically always be behind in Prize Cards. This card helps us achieve an impossible lock for the opponent to get out of.
1 Hex Maniac - The first of two Supporter cards you’ll want to loop. Spamming Hex Maniac is necessary against decks that play draw Pokémon, such as Octillery in Water decks.
1 Bellelba & Brycen-Man - Once we whittle our deck down to no cards, we can play this card with effectively zero drawbacks! It expedites the milling process as well. This card is the 2nd Supporter card we play after Lt.Surge.
1 Echoing Horn / 1 Captivating Pokepuff - These are what I like to deem our “trap cards”. These are essential for any opponent who may know how to play against Control decks effectively: by not playing down any Pokémon that we can trap easily. Both of these cards will help us by limiting the degree to which our opponent can play around with our strategy. Eventually, we can force a Pokémon onto our opponent’s bench either from their discard pile or their hand.
1 Galar Mine - A great Stadium to trap Pokémon in the action with either free retreat or a single retreat cost. This card isn’t essential in all games, but it makes it so that any Pokémon can be a possible target.
1 Field Blower - A vital card against the likes of Air Balloon and Float Stone as well as if the opponent is playing Garbodor GRI to shut down our abilities.

You’ll notice something in common with all of these cards: none of them are shuffle-draw cards! We don’t want to waste any time by shuffling our hand back into the deck: we would much rather dig deeper into our deck by playing straight-draw cards. Many of these cards attempt to emulate playing multiple copies of Professor Sycamore within this singleton format. It works quite well at achieving our goal of hitting the bottom of our deck.

These are cards to help us swiftly setup our Pidgeotto as well as our Cincinno as quickly as possible. This will aid our draw engine and help us get to the bottom of our deck.

This format is a labor of love from the people who love to play this game the most; every single match is just played in the spirit of Pokemon, and it really shows how creative people can get in the middle of a pandemic. I would suggest trying this format out with your friends and I’d consider trying out different types of pokemon online decks (as well as different types of cards). The whole expanded format is your oyster, so choose your slots wisely! The decks discussed in this article require some new stuff from some new sets, as well as some old stuff from previous expanded expansions, so you should check out our shop for your PTCGO codes. I’d suggest nabbing some PTCGL codes and building some GLC format decks online because this format will only get more popular as more online tournaments are released for it. Until next time, have fun!
If you’re looking for codes for Pokemon TCG online play, feel free to pick some up in our shop. We offer Pokemon PTCGL codes at a very competitive price and ensure instant delivery of your PTCGO codes directly to your email. Thank you for reading this article today on PTCGO store! Have a great day.
SHARE THIS POST
Previous Post
Next Post