Written by Pokemon TCG trainer on 3/17/2021 at category
Top of the afternoon, Trainers! As we embark on Fighting (Battle) Styles coming in as the next PTCG expansion set, we’re going to see an onslaught of new decks approaching the metagame - a lot of these decks are seriously powerful, and aren’t anything we should scoff at. Many people are debating whether or not Rapid Strike (RS) or Single Strike (SS) is the stronger of the two mechanics coming out of the set, however, I’ve been fairly torn on the subject since the initial release of the set. To be honest, when I first read the new cards coming out, I had thought Single Strike Urshifu VMAX was going to be the stronger of the two Urshifu, but that was just at first glance - now that I’ve actually had the time to look at the Rapid Strike engine, I’m inclined to think Rapid Strike is better for a few reasons:
A: It seems to be more versatile and lends more options than just “hit as hard as possible and hope it sticks” (this is typically what the SS engine hints at).
B: Octillery, the support Pokemon sidekick for RS decks, is WILDLY versatile! It encourages strong deck building and really forces you to think outside the box when planning your 60 card list. Octillery can make a card such as Korrina’s Focus strong because it is searchable.
C: You can draw multiple Prize Cards by KOing multiple Pokémon at once. While a simple Mew UNB can be a stick in the mud for this strategy, you can really disrupt your opponent with a swift double KO. This is something SS can’t do.
D: This is probably the most important reason on this list: you don’t need as much setup as SS decks do. RS Urshifu VMAX can attack the second turn with a Rapid Strike Energy combined with a regular Fighting Energy - SS decks need multiple Houndoom in play, and they need to setup their VMAX as well on top of that. RS decks also have Octillery which can be a massive consistency crutch, however, it isn’t necessary to setup all the time.
For these reasons, I think RS Urshifu VMAX is a more optimal deck than SS Urshifu VMAX, but let’s talk about why I think RS Urshifu is just insanely strong in general. Without further ado, let’s hop into it!
You can expect to find Single Strike and Rapid Strike PTCGO codes available on PTCGOStore.com’s website once they become available. The price for these PTCGO codes is susceptible to change within the various weeks after the set is released. Without further ado, let’s jump into some analysis of some of the new cards that are released! Let’s talk about some more of my favorite new cards from Single Strike/Rapid Strike! 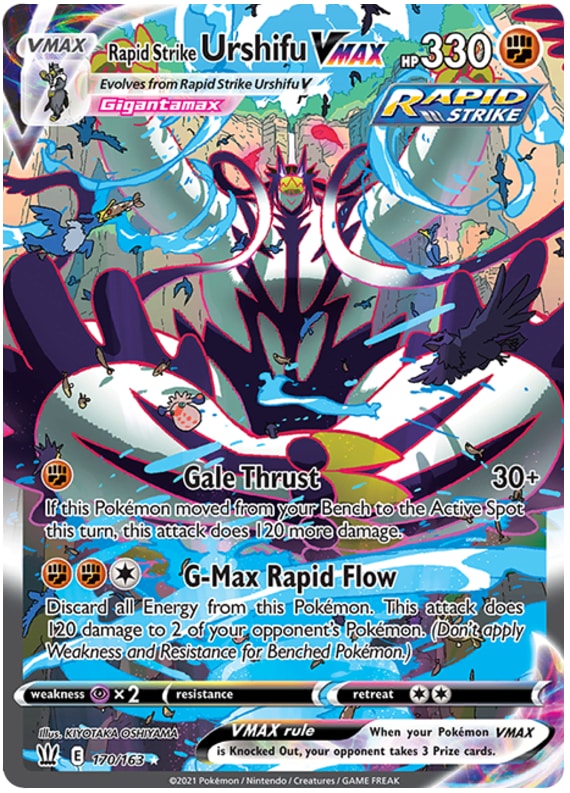 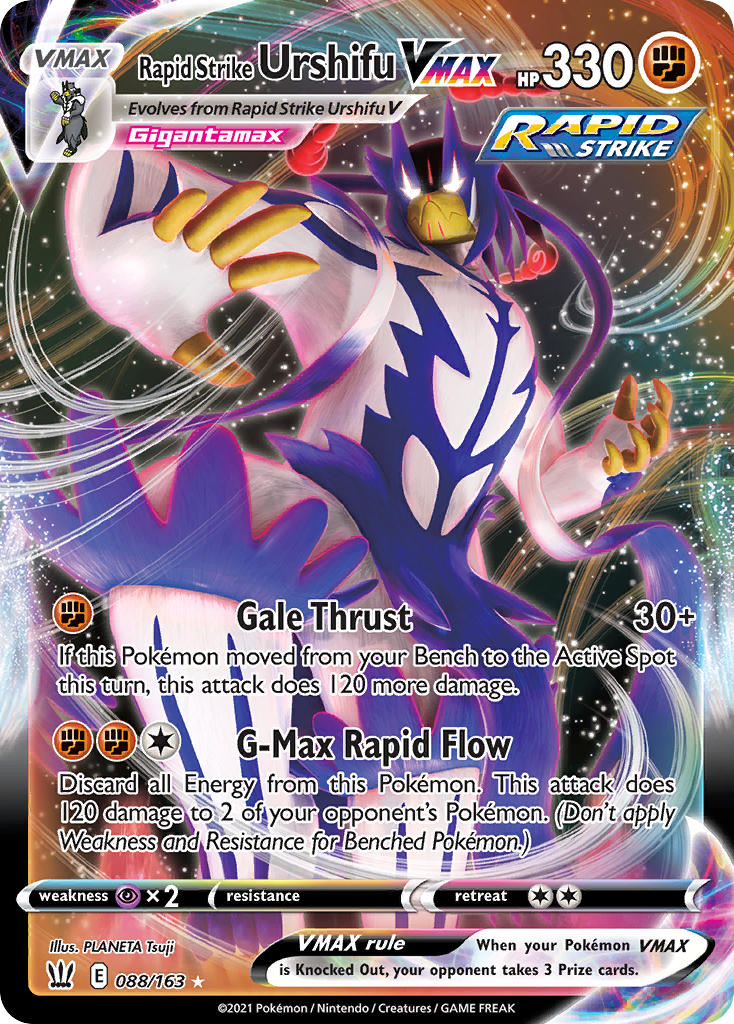 The strategy with RS Urshifu VMAX is highly dependant on what the opponent is playing, but generally, you’re going to want to setup your Urshifu VMAX by turn two, and soften up/KO any opposing threats by spreading damage into them with the second attack. We are able to get off Urshifu’s second attack by the second turn by taking advantage of Rapid Strike Energy, a very key part of the Rapid Strike engine. Then, you can clean up by simply KOing the opponent with the first attack. You can be highly disruptive this way, or if you need to be more aggressive you can take cheap Prize Cards by picking off support Pokemon such as Jirachi, Crobat V, or Dedenne-GX. It all depends on what point you are at in the game, however, both routes will lead you to victory. 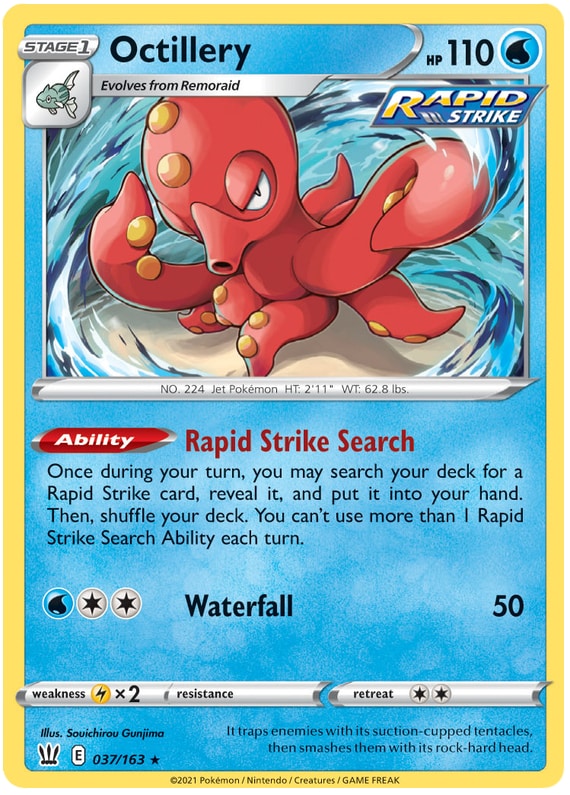 Setting up Octillery is also a very integral part of our strategy - it will ensure us that we don’t whiff the cards we need to setup, and will also allow us to find disruptive cards within our deck, like Fan of Waves. Likewise, if we’re ever not drawing into a Supporter card, we can search out a copy of Korrina’s Focus in order to draw out of things! Remember, Octillery can find us Pokémon and Energy provided they have the “Rapid Strike” icon printed onto them, so you can search out an RS Urshifu VMAX or a Rapid Strike Energy if need be.

4-3 Rapid Strike (RS) Urshifu VMAX - RS Urshifu VMAX is a tank to deal with seeing as it has 330HP for the equivalent of Stage 1! This is fairly high as far as VMAX Pokemon go, and puts it out of range of some 2HKOs. For one energy, we see an attack similar to that of Golisopod-GX (which was a very good card for the time). Being able to hit 150 damage for single energy is massive, especially energy denial decks or decks that are very aggressive; low energy attacks mean we can deal with threats very quickly. The second attack, G-Max Rapid Flow, is able to hit two Pokemon for 120 damage! This means we can wipe out Dedenne-GX, Crobat Vs, and many other bench sitters on our opponent’s side. The best part? This isn’t a GX attack – we can do this as many times as we want to in a game. All provided we can continue to power up our RS Urshifu VMAX a second time, which should be no problem with Rapid Strike Energy. Fighting-typing on this card is immaculate as it can really prey on popular Pokemon such as Pikarom and Eternatus VMAX. Both Crobat V and Dedenne-GX are weak to Fighting as well, so the typing is amazing on this Pokemon. Psychic-weakness is a bit of a fault on this card, however, we can overcome it with a Jirachi-GX.
Let’s talk about the Basic Urshifu V! Being the Basic V that will VMAX evolve into an Urshifu (RS) VMAX, it’s not going to be super flashy, but it can abuse Rapid Strike cards such as Rapid Strike Energy and Octillery! This card has a nice hit and run attack for single energy, some solid HP, and a decent second attack hitting for 150. This card isn’t too special at first glance, but with the in-game mechanics released and Urshifu’s Fighting-type, this V can hold its own on the field for a few turns before it evolves.
2-2 Octillery – This is the glue in our deck! It can search out anything from an Urshifu V to a Korrina’s Focus, or perhaps even that Rapid Strike Energy. Octillery is something that isn’t vital in order for our deck to function but is one of the main reasons that RS decks will be so powerful. This card can help us to balance out the likes of Marnie and Reset Stamp and ensures that we don’t whiff certain cards at detrimental times. Being a Stage 1 isn’t ideal however we do have Pokemon Communication in order to search it out.
2 Galarian Zigzagoon – These are super key so that we can KO things that have 130 HP on the opponent’s bench, such as Houndoom that will be played in new SS decks We want to be able to KO Dedenne-GX as well by sniping it for 120, plus Telescopic Sights, and a Zigzagoon ping to boot. These are very key for hitting the numbers, and I wouldn’t mind playing Scoop Up Net is here to recycle these.
1 Jirachi GX – This is entirely in here to remove Psychic-weakness from our titan attacker. Common threats that are Psychic-type and exist within standard include Mew and Mew TTGX, Polteageist, and Dragapult VMAX. We can’t afford to be OHKOed since we give up three Prize Cards, so instead we can chill with one of these on our bench.
2 Boss's Orders – We generally don’t need more than two Boss’s Orders in this deck because we’re able to snipe so aggressively! This is a fantastic card to include in our deck though because we do need to 2HKO most things on the opponent’s side of the board, so if your opponent ever ends up hiding threats on the bench (or perhaps behind a Mew UNB), you’ll need to Boss something up. Eldegoss V provides an additional out to Boss, but as Mew becomes more popular (which I predict it will), a third Boss will become a staple.
1 Korrina’s Focus – This is a searchable Supporter via Octillery’s ability. I’d consider the 2nd copy in this deck as you don’t want to prize it, or discard it early and not have access later on!
1 Cheryl – This is a monstrous Supporter that I could see us playing more of in this deck! Since we naturally discard energy with Urshifu’s second attack, Cheryl naturally makes sense to heal our Pokemon that have no energy attached to them. Eldegoss helps us to retrieve this card from our discard pile once we’ve played it/discarded it!
2 Telescopic Sight – This is a card that will help us to OHKO Dedenne-GX when combined with a Zigzagoon ping. This is a card that could potentially get dropped to a 1-of, but when you pull off the combo it feels like free Prize Cards so I’m unsure if dropping a copy is the play or not.
1 Fan of Waves - This may be the most disruptive card to come out of this new expansion. Fan of Waves fills a gap that was very looming within our standard format – a way to remove Special Energy from play. Fan of Waves is a softer version of Enhanced Hammer: it puts the Special Energy card it targets on the bottom of the opponent’s deck. While very disruptive to these new Special Energy cards that have been printed (both SS and RS Energy), they do not get discarded – instead, they get recycled into the deck. This is refreshing, and interesting, as this card is marked as a “Rapid Strike” card, meaning it can be searched out by Octillery RS.
4 Rapid Strike Energy – The bread and butter of this deck! Excellent addition to our new archetype, it makes streaming attacks very simple.

There are a few combinations you can use to make this deck absolutely broken! Remember, I left four spots open so you can have fun with it!

Looking for a deck that can steamroll opponents? Urshifu RS VMAX is your go-to! I love the deck, and it is by far my favorite deck out of the newest expansion. There’s still so much to learn about this deck, so load up some PTCGO codes, make some trades, and give this list a shot!
If you’re looking for codes for Pokemon TCG online play, feel free to pick some up in our shop. We offer Pokemon codes at a very competitive price, and ensure instant delivery of your PTCGO codes directly to your email. Thank you for reading this article today on PTCGOstore.com! Have a great day.
SHARE THIS POST
Previous Post
Next Post 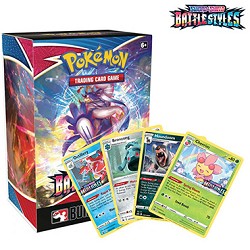